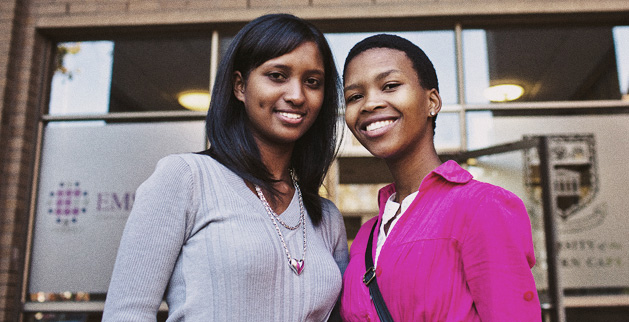 I fidgeted anxiously in a metal chair, practicing my breathing. In a moment’s time, I would be addressing a crowd of nearly 1,000 people at a high school graduation in Cape Town, South Africa. The graduating students took up the first 10 rows, their parents the remaining 50. Multi-colored headscarves dotted the auditorium of the predominantly Muslim student body. They all watched with interest as the only white person in the room approached the podium. I took another forced breath, remembering the journey that had brought me here.

Five years ago, from the couch of my apartment, I started an organization called These Numbers Have Faces (TNHF). What began as a bold step to help a friend in South Africa attend college has grown into a dynamic education and empowerment program affecting the lives of hundreds throughout Cape Town.  Tonight, my organization would be selecting four students from the graduating class to receive full college scholarships.

To the students before me, I spoke about the importance of education and its ability to transform communities and inspire nations. As I got into the rhythm of my speech, I saw heads nod in agreement and received a few whoops and hollers from the audience. But the following speaker, student valedictorian Tasneem Oliver, quickly proved I was just the opening act. Tasneem’s valedictory address was candid and raw. Her soft voice bore witness to her many adversities in life—poverty, abuse, family struggles. Through it all, she persevered and pushed forward in her studies, knowing her life was only what she made it. As she continued on, her voice grew bolder in confidence, with words that pierced the hearts of every person in the auditorium, including mine. I glanced at Edwin, our South African executive director. He nodded and whispered, “One down, three to go.”

That night as I celebrated the academic achievement of these hard-working youth, I could sense something bigger was taking shape. To understand South African culture, is to understand a country cut deep by dividing lines. It has been 17 years since the end of apartheid, the system of racial segregation that was violently enforced in South Africa from 1948 to 1994. Despite the successful transition from segregation to democracy, there are still invisible barriers standing between people. Black, colored, white, Christian, Muslim—these divisions remain ingrained into the subconscious of the population. But meeting the next generation of TNHF scholars, I knew we were on the edge of something great. These scholars would be the ambassadors of social change in their communities, fulfilling the legacy of Mandela and Tutu. The hope for reconciliation is in their hands.
. . .

Tasneem was waiting outside when we pulled up. Broken glass crunched under our tires as the rental car lurched to a stop in front of her home. As the 2010 valedictorian, her academic aptitude earned her a full scholarship from These Numbers Have Faces to study accounting at a prestigious Cape Town university. Growing up in a conservative Muslim home, Tasneem was shy with people she didn’t know but was lively in groups of friends. Tasneem has lived her entire life with a view of train tracks outside her front window. Across those tracks are the outskirts of a black township called Gugulethu, a predominantly Christian population of Xhosa descent. They speak a different language than Tasneem, eat different food, observe different holidays and support different soccer teams.

A few days earlier, not far from Tasneem’s house, I met a young woman named Busisiwe. Edwin and I had visited her all-black high school in the township of Gugulethu to give presentations about our college program. Busisiwe’s energy and vibrant smile were infectious; she was a genuine pleasure to be around. As Edwin and I listened to her story, we were surprised to find that beneath this smile was a life of heartache. When Busisiwe was 7, she and her sister were orphaned after her mother died of HIV/AIDS, leaving the young girls in the hands of South Africa’s notoriously substandard foster care system. Late one night, she awoke to screams and walked outside to find her teenage sister stabbed to death by local gang members. In the coming years, Busisiwe relied on her deep Christian faith to get her through the trauma of her past. Singing songs in church and writing poetry, her faith in God and dedication to her studies resulted in outstanding grades through high school and a college scholarship from These Numbers Have Faces thereafter. She chose to study accounting at the University of Western Cape, the same program as Tasneem.

The religious and cultural divide between Tasneem and Busisiwe is a microcosm of a country not yet out from underneath the devastating effects of state-imposed segregation. Despite living less than a mile from one another, the two women had no reason to step across the tracks that kept them apart. Yet this last Spring, I watched them come together at the TNHF student retreat. The two young women found themselves sitting around a campfire with 14 other students of varying religions and ethnic backgrounds. Side by side, they were given the chance to call out the dividing lines that, until now, had prevented powerful friendships from beginning. As barriers broke down, they shared stories of overcoming community violence, fights at gunpoint, the death of loved ones, domestic abuse and the struggle of applying to and succeeding in university.

During a visit with Busisiswe at the home of her foster family, she remarked: “All the students, we come from different backgrounds and religions. But when we get together we don’t think that, because I’m a Christian, I can’t be family with a Muslim. We’ve all come together as one family, as These Numbers Have Faces students.”

The miracle of reconciliation is in seeing ourselves through the eyes of others. As Henry David Thoreau wrote, “Could a greater miracle take place than for us to look through each other’s eye for an instant?” As part of the These Numbers Have Faces program, Tasneem and Busisiwe have been welcomed into a community that has become a family. Realizing the commonality in their struggles, TNHF scholars represent a movement toward reconciliation among the young people of South Africa. They stand as a testimony to their communities that reconciliation is possible.

Back in classes at the University of Western Cape, Tasneem and Busisiwe sit together laughing like old friends. “These Numbers Have Faces is like my family now,” Tasneem says. “I never thought Christian people could be so caring. TNHF is my hope for the future and through education I know I can break the cycle of poverty in my community.”

Justin Zoradi is the founder of These Numbers Have Faces, a nonprofit organization that educates and empowers South African youth to ignite community transformation. He writes at JustinZoradi.com and you can follow him on Twitter @JustinZoradi.

Counting the Cost of Cohabitation