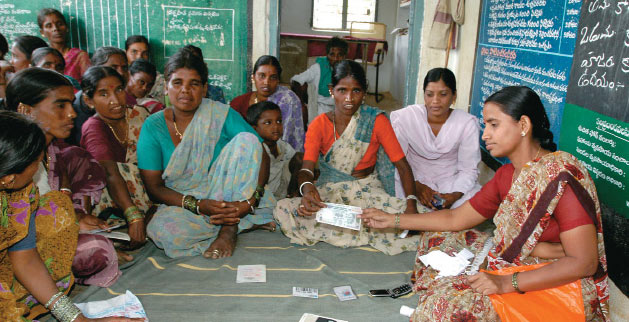 In Sierra Leone, a mother rises before dawn to cook breakfast. With a meal of rice and eggs on the table, she wakes her three young children. After breakfast, she takes the children to school and returns home. She runs a small business out of her house, selling clothes, shoes, and school supplies. She markets her business through neighborhood relationships and word-of-mouth advertising. After working all day, she picks her kids up from school and makes them dinner. Once the meal is finished, she manages the shop for a few more hours. She needs a larger inventory to meet demand. So with a $1,000 loan backed by Kiva, she purchased more products. She is turning a profit, and each month she faithfully pays back the loan. Her dream is to open up her own store, and turn a greater profit to support her family.

In Cambodia, a young man rises before dawn to milk the cows. He runs a milk business inherited from his father. After tending to the cows, he walks to a nearby market to sell fresh milk. Although he did not receive a secondary education, he demonstrates sharp business skills by building relationships with his regular customers. He walks home at night, and makes dinner for himself and his mother. He is exhausted, yet he must wake up in a few hours. He just received a $1,000 loan backed by Kiva to purchase a new cow and pay for the animal’s care. Although the job is still taxing, the young man will generate more revenue for his work.

These entrepreneurs reflect the human realities of microfinance. Defined as lending small amounts of money to businesses in the developing world, microfinance is a critical asset to ease global poverty. Although dependent on lending, the entire venture of microfinance is insolvent without the strenuous labor of impoverished entrepreneurs. In the developed world, we have a limited perspective on the daily pressures, trials and challenges facing people living on a few dollars a day—struggling to provide for their families. These people have historically been excluded from capital, and that exclusion ensures they will continue to mire in poverty.

By recognizing these realities, Kiva and other microfinance organizations aspire to change the dynamics by utilizing the Internet to connect lenders to borrowers in the developing world. This simultaneously empowers the borrowers with crucial loans, and allows lenders the opportunity to finance these loans while learning the stories of inspiring entrepreneurs. For its entire history, Kiva has been an experiment in crossing social fractions. After almost six years, the experiment has been wildly successful.

Christianity has a complex relationship with lending. Verses from the Pentateuch ban lending at interest (Deuteronomy 23:20, Leviticus 25:36-37). Luke 6:35-36 could be interpreted as a prohibition against lending from the lips of Jesus. The basic premise—refusal to profit unjustly from the poor—is sound. Modern microfinance strictly follows this principle. Yet Christians may feel wary about lending, preferring donations instead. Though donations are obviously beneficial, today’s Christian should also embrace microfinance. The Parable of the Tenants offers justification for this embrace.

The Parable of the Talents in Matthew 25:14-27 (a similar narrative found in Luke 19:11-24) is an oft-cited parable, and sometimes abused to validate profiteering. In Matthew, a master of a small kingdom is leaving on a journey, and entrusts three servants with “talents.” According to their ability, the servants receive five, two and one talent, respectively. The first two invest their talents; yield a return, and the master lauds their efforts. The third servant buries his talent out of fear of the master, and is verbally castigated as a result.

In first-century Judea, a talent was a heavy mass of gold or silver, weighing between 75-88 pounds. One talent equaled approximately 10,000 drachmas (the normal currency amongst poor and agrarian classes). A subsistence farmer earned an estimated 500 drachmas per year for his crop. Therefore, one talent equated to 20 years of revenue from subsistence farming.

In light of a talent’s lucrative value, the master’s action is a risky experiment in human relationship. Despite the hazards, he affirms the inherent value and worth of the servants by trusting them with immense wealth. The master implicitly renders entrenched social fragments irrelevant—if only in his small kingdom. This is a daring edict to the rest of the community.

In the Lucan version, the citizens respond with umbrage. They dispense a delegation to express their ire and rebut the master’s sovereignty. On a certain level, their response is logical. The Judean economy outside Jerusalem was almost exclusively agrarian and primarily internal. External investment and commerce rarely injected into these minute economies. Therefore, entrusting three lowly servants with the talents risked the fiscal solvency of the entire group. The master believes in the inherent value of his servants, and the collective finds this belief quixotic.

The first two servants yield a strong return on investment. The master praises their efforts, and compensates them with rule over 10 and five cities, respectively. Servants are now masters—inverting the social pyramid. This undoubtedly baffles the citizenry, but the servant’s impressive profit leaves no ground to appeal.

The master chastises the third servant for burying his one talent. Why is the master so irate? Although cloistered, the talent was not lost—thereby squandering 20 years of agrarian labor. One interpretation for the severity of rebuke is that the master’s investment was primarily human, not monetary. The master risked the legitimacy of his governance by trusting the servant with a talent. Unrecognized by the third servant, the master endeavored to form a relationship across rigid social boundaries. Yet the servant still felt inferior, and expressed that sentiment through fear of the master. The life-affirming relationship between master and servant was stymied.

Among the many interpretations of this parable is a stirring affirmation of modern microfinance. Although we are not nearly as altruistic as the master, loans to entrepreneurs in the developing world extend beyond fiscal value. By learning about a borrower, his or her business, family, struggles and dreams, we connect with another human being across national, cultural, racial and religious fractions. Despite our limited perspective on poverty, we form a partnership through loaning, and therefore uphold the equal value of the borrower’s life. Although the borrower may not become a master, their courage amidst poverty to grow their business and support their family deserves laudatory praise. For this reason, microfinance is both a tool to alleviate poverty and a lens to witness the inherent value of every human life.

Apple Predicts Its Own Future

The Most Misused Biblical Term