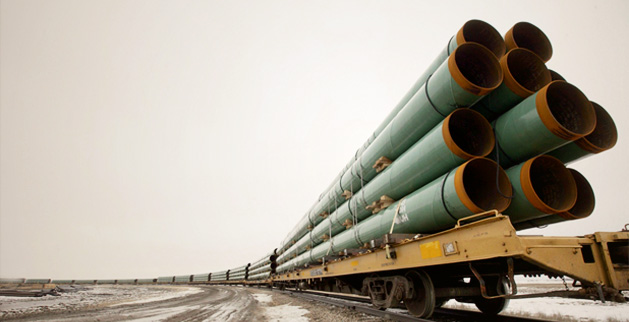 On a quiet Monday morning in August, monks and ministers gathered under tall trees outside of the White House and began organizing their plan for the day: They would walk in two lines to the mansion’s gates, sit down and wait for arrest.

While this objective may seem a strange task for a minister, it was no ordinary workday. This was the day faith-based organizations joined environmental groups in mass protests over a proposed oil pipeline.

“We as Christians aspire to follow the example of Jesus,” Fr. Jacek Orzechowski said to the crowd before risking arrest. Orzechowski represented the Christian community as part of the Franciscan Action Network. “Jesus, who had particular concern for those who were on the margins of society; Jesus who spoke about how we will be judged, not only as individuals, but as nations, according to the criteria of how are we treating the least of those among us.”

In 2005, the Canadian energy company TransCanada proposed Keystone XL, a tar sands pipeline that would bring as much as 900,000 barrels of crude oil per day through the western half of the United States and cross from Alberta all the way to Texas. The system’s first phase began commercial operation in 2010, but the State Department still needs to approve an expansion in order for the full project to move forward.

TransCanada and supporters of Keystone XL claim it can boost the economy, promote job growth and increase tax revenue. According to their research, the project will also lower gas prices and improve energy security for the United States.

“Through the Keystone system, the U.S. can secure access to a stable and reliable supply of oil from Canada … or it can import more higher-priced oil from nations who do not share America’s interests or values,” says Russ Girling, president and CEO of TransCanada.

But dissidents argue no economic impact justifies the environmental and human destruction the pipeline could cause. According to Tar Sands Action—an activist group leading nationwide protests over the project—the pipeline would greatly expand the tar sands oil operations in Canada and further lock the U.S. into the hard-to-extract energy business.

In addition, while TransCanada only predicts one oil spill every seven years, the project has already allowed 12 spills in one year. If the pipeline extends into the U.S. heartland, spills could occur in the country’s agricultural center and severely damage the U.S. water supply by polluting the Ogallala Aquifer. Indigenous communities fear displacement and permanent damage to their homelands.

Perhaps most important to activists, the pipeline could potentially release carbon into the atmosphere, which could threaten further climate change.

In August, Tar Sands Action launched a campaign against the pipeline by organizing two weeks of sit-ins at the White House. The resulting 1,252 arrests and more than 600,000 petition signatures made their initial work the largest environmental civil disobedience in decades.

“I didn’t want to participate,” says Abel Russ, who was arrested in the first days of the protests primarily over the climate change issue. “But I feel like anyone who knows has an obligation to do whatever they can to say something public about it.”

Tarah Heinzen, who was also arrested in front of the White House, agrees. “If people are not willing to take risks and commit acts of civil disobedience to challenge corporate power, nothing will change our backwards policies.”

Soon religious leaders joined in, and on Aug. 29, communities of faith led the sit-ins, where leaders from Catholic, Protestant, Muslim, Buddhist and other spiritual organizations spoke out against the pipeline and faced voluntary arrest.

Over the next few weeks, the State Department is entering public comment hearings in states affected by the pipeline. The largest and most dynamic hearings were expected to be the Sept. 27 hearing in Lincoln, Neb., and the Sept. 28 hearing in Austin, Texas. On Oct. 7, a final public hearing will take place at the Ronald Reagan Building in Washington, D.C.

In the meantime, Tar Sands Action protests continue across the country in affected cities and at presidential campaign events—a response due in large part to the momentum from the 1,252 arrests in D.C.

The State Department expects to make a final decision on the pipeline extension by the end of 2011.

“This is not only a political issue—this is a profoundly spiritual and moral issue as well,” Orzechowski says. “If we stay on the same trajectory of our addiction to oil, it threatens life. And as people of faith who can uphold the values of life, we have to do what we preach and join the dissent to speak out for God’s creation.”

Joanna Castle Miller is a dramatic writer and journalist based in Washington, D.C. She blogs at JoannaCastleMiller.com and tweets @jocastlemiller.