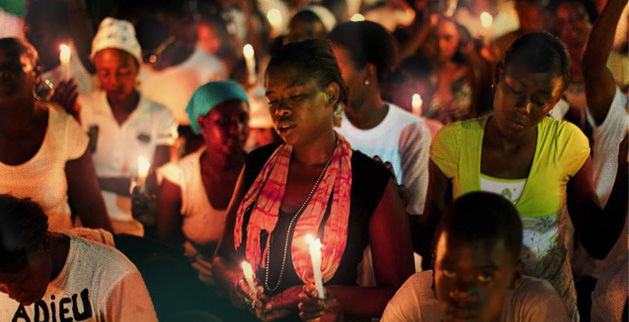 My friend Luke was in the northern city of Cap-Haitien when the earth shook. There was almost no damage in that area, which he’d moved to from the United States with his wife and three children six months earlier to work on education projects. He’s also a professional photographer and filmmaker, so within thirty-six hours, as soon as he could find a ride, he left his family and got to Port-au-Prince.

About six weeks later Luke and I were talking just outside of Port-au-Prince. Luke has the skills of a professional and the heart-on-his-sleeve emotion of an artist. He’d done everything possible to get to Port-au-Prince. Now he was saying he wished he hadn’t seen and experienced what he had. (I don’t doubt he was telling the truth, though he would have regretted not coming too.)

You want to escape the awful suffering yet are pulled to concentrate on the hands and faces of the victims. You want to turn off the lead story on the local news but can’t help hearing what went horribly wrong for someone. You want to get away from all the pain but watch the roster of criminal investigation TV shows—both fiction and documentary. You peek through clinched eyes at the replay of the quarterback’s knee getting blown up by a defensive end. It’s hard to turn from the gossip you hear on TV or from the neighbors or in the pews. But if you actually do turn quietly away from serious suffering—of wars, of family, of a local family in need—that is uncomfortable too.
. . .

Jesus couldn’t avoid suffering; it sought him out. Once he and his friends were making their way to Jerusalem. It was a long walk. As they entered one of the villages along the way, ten men came toward them. Jesus’ entourage was used to attracting increasing crowds, but I imagine there was something unnerving about the aggressive way this group was approaching. Suddenly the men stopped short.

“Jesus, Master, have mercy on us” one of them called out.

A few seconds of silence and then they couldn’t hold back as planned. Another man, and then soon all of them, started yelling “Have mercy on us!” again and again to make clear just how desperate they were.

Don’t turn away, they were saying. Sometimes we’re so damaged by wrongs done to us that all we can do is beg to be noticed, Don’t come near, they made dear by stopping short. Maybe too by the way they shouted out their request. It was what they were supposed to do then as lepers as precaution against spreading the disease. Sometimes, because we’re so damaged, our only way to ask for mercy or love is half-heartedly. We’re protecting ourselves. We’re protecting anyone who would help us: “This is so toxic—I need help but you won’t be safe if you’re near me.”

One of the skills of friendship and dating is keeping your raw needs and hurts hidden from view so as not to scare the other person away. You reveal them gradually to each other so they can be handled. The lepers had neither the time Jesus was just passing through) nor any subtle options: the need and the distance were immediately on display.

It’s incredible how often people who could go in the opposite direction don’t turn away. Plenty do (including me, too many times to count), but so often there is one or two who help. The miracle we pray for, if we can pray, is for that person to come close enough. The miracle we pray for, if we have enough courage, is for the courage to go close to someone who is hurting deeply.

The lepers just stood there.

Don’t turn away, and Jesus didn’t. He healed them. He sent them away for official full-health confirmation. He had met their challenge. Then he seems to have issued an unspoken “Don’t turn away from me” challenge of his own. And he waited.

Only one ex-leper came back, compelled by gratitude, and threw himself at Jesus’ feet, praising God in the same loud voice he had initially used to ask for mercy.

Nine others didn’t return. I’d always been taught that this was a lesson about (a lack of) gratitude. One of the recent children’s songs being sung in our house jauntily makes this point.

But might the other nine have just been carried by joy? And who from whose embrace they’d been so cruelly exiled by disease? Jesus’ statement almost seems petty when the one leper comes back: “Were not all ten cleansed? Where are the other nine?”

Isn’t it enough, Jesus, that you set them free back to love? Isn’t it enough for you that they called out for mercy? Isn’t the suffering itself enough for you? How much more can you ask? If you leave us at a distance to suffer … can you then demand nearness and praise at your feet when we’re healed?

Don’t turn away and pretend suffering isn’t pandemic. Don’t become a charitable tourist of suffering either. Pain is personal—with poverty and illness among the worst exacerbating factors—but also universal. Don’t turn away from confronting my own cowardice. Don’t turn away from doing everything possible to stop suffering. There’s so much we can do nothing about, but we can help—sometimes one person and sometimes many. We discover we’re impotent and edge closer to despair; other times we become contributors to goodness and edge closer to hope. Whatever the outcome, not turning away seems vital to the work of trying to stay human, of trying to find truth, and maybe even God.

Taken from After Shock: Searching for Honest Faith When Your World Is Shaken by Kent Annan. Copyright(c) 2011 by Kent Annan. Used by permission of InterVarsity Press PO Box 1400 Downers Grove, IL 60515. www.ivpress.com.

Is There Hope After Suicide?

When Trolling Is a Crime