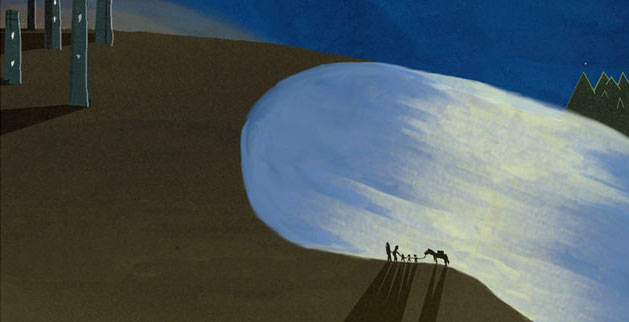 He takes a drag of his cigarette and looks across the table at me. “I don’t know what will happen to the farm,” he says. “It makes me very sad to think about. To work for years to get it planted and working, then to be forced to leave.” His cigarette returns to his lips and he looks up at the sky, deep in thought, as darkness begins to overtake the city. We’ve lost our lighting and will have to resume the interview tomorrow. We talk a while longer, then Abelardo gets up, gives me a semi-intimate hug/handshake, climbs on his bicycle and pedals off into the night.

I watch this scene unfold almost a year later on my computer screen. I think about all that has transpired since Abelardo spoke his story to us as our cameras rolled. I scroll to the end of the Final Cut timeline. The face of Abelardo’s wife, Olga, fills the screen. She stands in front of the farm that Abelardo spoke of, the farm that used to be their home. In the background, neighbors are packing the last of Abelardo and Olga’s belongings onto mules. Olga wipes tears from her eyes, clears her throat. “But I have hope. Hope to return. But who knows, no one knows except God. He’s the only one that can help,” she levels her eyes at us. “And you, you can help us.”
{video http://vimeo.com/18139619}

This moment would change the course of lives. We were witnessing displacement happen, right before our eyes, with our cameras rolling, and this woman entreating us to do something about it. We may have gone to Colombia as aspiring filmmakers, but we came back as inspired activists.

According to a 2010 United Nations report, Colombia now has the world’s highest population of internally displaced people. Reports vary, but research shows as many as 5 million Colombians have been forced to leave their land. That’s like the population of South Carolina, or of metro-Atlanta, or the Rose Bowl filled up 55 times. Five million is a big number.

Statistics have a way of communicating the scope of a tragedy while also creating distance between the people involved. Knowing there are 5 million Colombians who have been forced to leave behind their land, homes and farms doesn’t mean we’re any closer to connecting with this issue of displacement. In place of numbers, what if instead we knew the names of those affected by this crisis? What if we were familiar with their stories and recognized their faces? It’s easier to help people we know.

Take for instance, Abelardo and Olga. Their story is not uncommon in Colombia: farmers caught in the middle of the drug war who lose everything when their food crops are wrongfully destroyed by U.S. spray planes. They pack up whatever they can, say goodbye to their home and journey to the city slum in search of a new life.

Abelardo, Olga and their four children lived near a village called La Floresta. They cultivated cacao, a tree whose pods are harvested and manufactured into chocolate. In the summer of 2010, planes flew over the region and dropped a strong herbicide over the entire valley. The fumigations are part of Plan Colombia, a U.S. counter-narcotics policy created in 2000 by the Clinton administration. The goal of Plan Colombia is to destroy coca plants before they can be processed into cocaine. The reality of the situation is that just as much cocaine enters the U.S. today as it did 11 years ago when Plan Colombia was initiated. This policy has cost the American taxpayers about $8 billion in the past decade, hasn’t reduced the supply of cocaine and has wrongfully displaced many Colombians who have nothing to do with the drug trade.

Because of the fumigations, Abelardo and Olga lost their livelihood. They had no choice but to leave their farm behind and move to the city slum in search of a new life. Now, they live in a small one-room shack, without electricity or running water, in a part of town controlled by a criminal gang that extorts money from them. This is home for them now. Abelardo found a construction job, building tunnels underground for the city water service. It’s a job, but it doesn’t pay very much, and he wonders how he will provide for his family.

That’s what is on his mind when he talks to us. He wishes he could go back to the country, where you could at least grow your own food. “Here,” he says, “if you don’t have money, you don’t eat.” Because of Plan Colombia, Abelardo and Olga became statistics. They’re now two of the 5 million internally displaced people in Colombia. But now you know their names.

We documented their journey from La Floresta to the slum and have spent the last year producing a film called Leaving La Floresta. This fall, we will be screening the film up and down the East coast. We have two goals: first, that those who hear of this injustice will contact their representative and voice their concern about this policy of fumigation in Colombia; second, that audiences will join us in our efforts to resettle displaced Colombians back onto farmable land, starting with Abelardo and Olga.

We want to give displacement a name because we believe stories have more power than statistics. It’s easier to help people you know. We want you to know Abelardo and Olga.

Leaving La Floresta will be premiering in Altanta at the Plaza Theater on Sept. 17. You can check out the trailer here. Visit GiveUsNames.com to learn more about the issue, the story, and how you can get involved.

Is There Hope After Suicide?