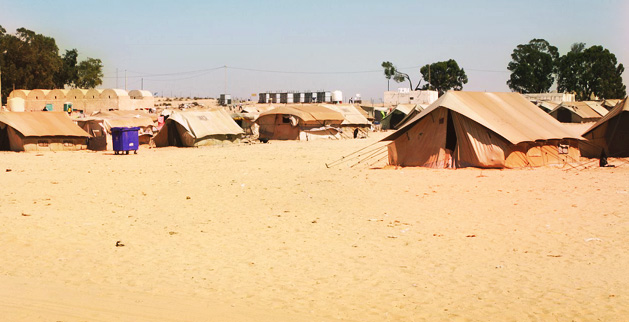 While news from Tripoli seems to evolve every minute, many Libyan refugees wish something, anything, would change for them.

“We are prey, victims of circumstance that cannot help the situation around us,” says “Sonny,” a refugee speaking on behalf of one community displaced in Tunisia. “We cannot spell our future, we cannot spell our destiny. Our educations, our talents, our professions, our skills, our ideas and expectations are dying inside of us every second.”

Thousands of migrant workers, from Nigerians to Pakistanis, fled Libya last winter and arrived at Choucha—a transit camp just over the Tunisian border. Authorities at Choucha have temporary goals: They intend to help refugees return to their home countries or resettle elsewhere, then close the camp. While many displaced people have moved on from Choucha already, a few thousand cannot return home without risking their lives, which means they have no other option but to stay in the refugee camp.

Choucha residents live in desert conditions where dangerous sandstorms and ethnic tensions threaten daily life. Authorities do not permit them to leave the camp or take part in local commerce. According to Scott Gore of in-fusion, a nonprofit organization working with the refugees at Choucha, the camp is “monotonous and difficult. When the wind storms come through, all the refugees can do is hunker down in their tents. They’re just stuck and waiting.”

As a result, the mostly young male population feels useless and bored, with nothing to do and no end in sight.

“It’s like purgatory, stuck between there and nowhere,” says Danielle Bolks, the special projects manager of the U.S. Committee for Refugees and Immigrants (USCRI). “There’s no larger picture. They’re wasting their lives.”

And while the refugees at Choucha suffer after only months, some refugees have struggled in similar conditions or worse for decades. The situation at Choucha reflects a tiny part of an enormous challenge for refugee care today: warehousing, as the USCRI calls it, or long-term encampment that robs refugees of their rights.

The 1951 Refugee Convention outlines certain liberties for all refugees, such as freedom of religion and movement, the right to work, education and accessibility to travel documents. Warehoused refugees—or those kept in a refugee camp for a long time—often enjoy none of these rights, and the complex causes might mean a long wait before encamped communities receive new opportunities.

Thailand, for example, does not recognize the Refugee Convention. Burmese refugees in Thai camps have very few options in fighting for more rights but also have nowhere else to go as they wait for the situation in Burma to improve. In Ethiopia, an exclusion clause prohibits refugees from working. They can get an education, but they will not be able to use it.

Countries committed to helping refugees tend to focus on resettling them in new countries by moving them across the world to start new lives, but less than 1 percent of refugees get to resettle, leaving organizations like USCRI wondering if governments could try more durable solutions.

“There’s no easy solution, but the question becomes, ‘What’s the right way?’ ” Bolks says. “Maybe refugees could actually support themselves and give back to the host country that’s helping them.”

In Choucha, which has housed refugees for roughly half a year, a sense of dissatisfaction permeates all aspects of daily life. But over time, Bolks says, those feelings give way to a deeper and even more tragic response: despondency. Children born into refugee camps know nothing else. Adults stop dreaming of education or work. “After five years, people give up on the hope and just want to get through the next 24 hours. They go past boredom. They become lethargic and say, ‘This is life—I can’t change anything.’ ”

Because long-term stays in a refugee camp can lead to passivity about a person’s future, those displaced people who do eventually go home or get resettled to places like the United States often struggle to make decisions for themselves. They feel as though they have nothing to offer, or that someone else is supposed to take care of them.

Refugee services in the United States typically try to help newly arrived refugees overcome the confusion and fear of suddenly having control over their own choices. Yet once they enter the workforce and become active members of society, they prove to themselves and to the host country that they are, and always could have been, resourceful and productive.

Fortunately, the U.N. High Commissioner for Refugees (UNHCR) and other organizations now recognize the problems long-term encampment can cause. They have started to encourage governments to receive and accept refugees into their local communities instead of placing them automatically in camps. Indeed, many Tunisians have shown great hospitality. Choucha only holds a few thousand refugees, a small number due in large part to the Tunisian people opening their homes for families fleeing the violence in Libya.

“It’s still possible to give them education, to give them health care, to give them food while letting them live in a non-encamped environment,” Bolks says, “so that’s an improvement in itself.”

In the meantime, the United States and some European governments have begun talking about resettlement for those Choucha refugees who have absolutely nowhere to go—the ones who cannot go home for political reasons, and who are most at risk of becoming warehoused.

“Encampment is not what everyone wants,” Bolks says. “Ten years ago it was expected. How do you feed people in an organized way? You put them in one place. And now, that doesn’t have to happen.”

Joanna Castle Miller is a dramatic writer and essayist based in Washington, D.C. She blogs at JoannaCastleMiller.com and tweets @jocastlemiller.

Blast in India Kills at Least 11