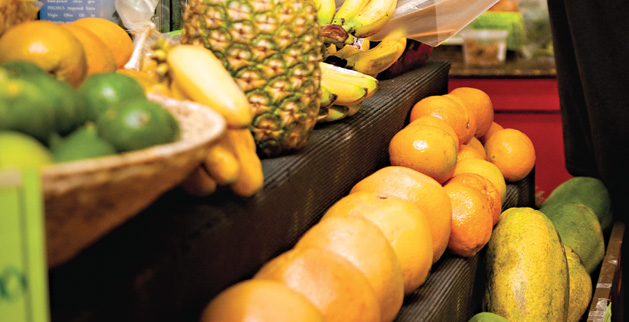 In an episode of the comedy Portlandia, a man and woman grill their server about the chicken they intend to order. She tells them the chicken (whose name is Colin) was raised locally, fed a diet of “sheep’s milk, soy and hazelnuts” and he roamed free on four acres of land (though she can’t speak to whether Colin “palled around” with his chicken buddies). The server then hands over the chicken’s “papers”—a form complete with his information and an attached photo.

The segment reveals real questions. With documentaries such as Food, Inc., King Corn, The Future of Food and Fresh fueling the fire, a new way of thinking about food is emerging: some call it agrarianism. Agrarians, standing in opposition to the industrial method of working the earth (chemicals, corporations and combines), position themselves as caretakers of the soil who think not only about capital gains but about manure, earthworms, grass, dirt, sustainability and the future.

In the 1930s, the plains from northern Texas into Kansas and Colorado became the “Dust Bowl.” This ecological phenomenon brought dust storms of apocalyptic proportions and was caused by a misunderstanding of the soil and an abuse of the land. Government incentives to settle and farm the region, combined with neglectful farming practices and new technologies, left the landscape scorched, dry and virtually uninhabitable. The fear is that again, in our time, government policies and subsidies, combined with heedless technophilia and industrial business models, have depleted the soil and reduced agriculture to Dust Bowl-styled dollar signs.

Joel Salatin, the farmer from Virginia made famous by the documentaries Food, Inc. and Fresh, speaks of the conflict between industrialism and nature. “New virulent diseases, soil loss, immune dysfunction, high energy costs, pathogenicity and compromised nutrients all indicate the failure of the mechanical view toward life,” he says. ”As that view tries rescue through irradiation, cloning, transgenic modification and more toxic chemistry, creation rebels in the form of yet greater maladies: MRSA, C. diff, type 2 diabetes, childhood leukemia and others. … The industrial/mechanical view toward life is simply running out of answers.” Gene Logsdon, another farmer and writer on Christian agrarianism, published a book about tending the soil not with machines but with manure. The title? Holy S—. In it, he writes: “Human society is moving … toward ever increasing consolidation. That is supposed to be our glory, but I fear it is also our doom.” Nothing as markedly catastrophic as the Dust Bowl has happened yet. But events just as weighty could be on the horizon. “Nature always bats last,” Salatin says, “and nature is coming to the plate.”

Few 21st-century children grow up on a family farm a phenomenon of the last 50 years. In The Essential Agrarian Reader, Wendell Berry writes, “In 2002 we [had] less than half the number of farmers in the United States that we had in 1977.” As that trend continues, ages of practical, earthy farm wisdom are disappearing as generations from the first half of the 20th century pass away.

Additionally, many Americans remain uninterested about the origins of the food they consume and the methods used to raise it. Farmers’ markets, documentaries and even some large grocery stores such as Whole Foods have begun bridging the gap between growers and eaters, but according to Salatin, they are just scratching the surface. “We must always consider the unseen world,” he says. “Each double handful of healthy soil contains more living creatures than there are people on the face of the earth. From actinomycetes to earthworms, centipedes to azotobacter bacteria, the soil is the most vibrant relational community on earth. Everything we are, everything we see, is completely and utterly dependent on this unseen world.

“That the average [Christian] family sits in their pew, memorizes the catechism, recites Bible verses, partakes of the sacraments and never even contemplates the profound implications of their utter dependence on this unseen, unsung, unappreciated community exemplifies a schizophrenic duality that God abhors.”

Agrarianism is more than just a whim or personal preference. It is the posture of honest humility—the very same posture to which Christians are called. Must Christians be agrarians, then? The answer from the Christian agrarian community is a resounding “yes.” The Bible exhorts its readers to embrace humility, and according to Sutterfield, humility connects us with the earth, reminding us of our place in it. “Job is a story about God saying: ‘I’m God. There is a whole creation and world completely independent of human beings, and it’s important to me,” Sutterfield says. “The eagles God cares for, the places in the desert He waters that no one will ever see—Job actually finds comfort in the fact that he is not as important as he thought he was.”

God named the first human “Adam,” from the Hebrew word for “dirt.” Yet, made in the image of God, and made from dirt-divinely muddy-mankind ought to take both of these together, tending his origins with divine care: cultivating the earth in godliness. “The closer we partake of the living world,” Salatin says, “whether it’s raising a baby calf or growing tomatoes, the more aware we are of the mystery and majesty of creation. That pushes us toward humility and greater appreciation of an all-powerful divinity.”

Some might wonder if there aren’t bigger issues at hand; does God really care about how we use the earth? Salatin believes not only does God care, but non-Christians are also taking notice of our treatment of the planet. “He who says the trees of the forest shall clap their hands, that the lilies of the field are more beautiful than Solomon in all his glory and that the sparrows are numbered surely is interested in whether the earthworms are happy. And whether pigs are happy. As Brother [David] Andrews says, eating then becomes a moral act. That is why the non-Christian community views Christians with contempt, charging hypocrisy, when it sees Christians stop off for Happy Meals on the way to a Right-to-Life rally. That is just as hard to reconcile as a tree-hugger or save-the-baby-whaler who promotes abortion.”

As agrarianism grows stronger roots into the hearts of earth-deprived Americans, ministries, co-ops, networks and community gardens are springing up like rows of non-GMO, chemical-free heirloom corn . Then there are those who hear the call of the wild, choosing to leave the urban jungle behind in favor of greener, broader spaces. Each type needs the other, and as the agrarian spirit takes hold, Christians are recognizing the Gospel is not just about saving souls but about receiving Christ’s life into an embodied soul, and hoping and working for the redemption of all things.

Ceasefire in Effect in Syria