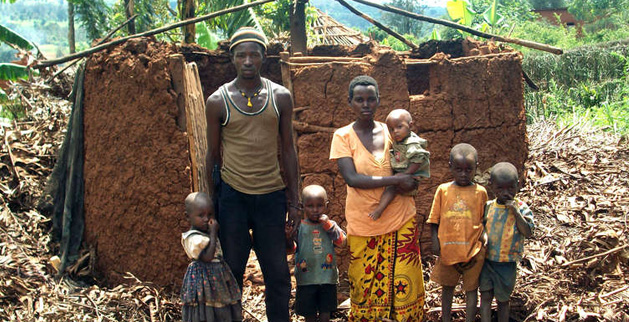 Propaganda flooded the country’s radio waves. Hysteria broke loose. Neighbors picked up guns against neighbors, and in a matter of weeks more than 800,000 Rwandans fell dead. Although 17 years have passed since Rwanda’s genocide where the Hutu tribe attempted to wipe out the Tutsis, many Rwandans still bear the marks of a war-torn nation. Yet as a new generation rises up, hope for the country’s future rises with it.

Bruce Mfuranzima, 20, believes his life is a miracle. As a youth who lost everything during the killings, his future once seemed empty, but last year he graduated first in his high school class and now stands in line for a scholarship to Rwanda’s top university. “I lost my family, my house and everyone who cared for me. My life was suffering, but God has given me new life and the chance to bring about change and hope,” he says. “This is my story.”

Due to the segregation of the Tutsi from the Hutu in 1959, Mfuranzima’s family, of Tutsi heritage, was scattered throughout East Africa. He was born in Burundi to a single mother who had many children from different fathers—he never knew his own. When he was 4 years old, Mfuranzima heard his mom scream as she talked to her sister living in Kigali, Rwanda. “I’ll never forget that phone call. That’s when the killings began,” he says. “You could hear people on the phone being cut with machetes.” His aunt died with most of his extended family, so he was left alone with his mom.

Mfuranzima explains that because he has a slender body and a long nose, he is easily recognized as a Tutsi, which would have made him a prime target in the genocide. “I could have been killed too,” he says. “I know God had me in Burundi for a reason.” In 1996, Mfuranzima’s mom was diagnosed with breast cancer and returned to Rwanda to live under the care of Mfuranzima’s uncle. However, he wound up living alone with his mom, and after eight months she passed away. “She suffered alone and then left me alone,” he says.

Mfuranzima then turned to the streets, fending for himself by selling drawings, playing music and doing odd jobs. He had a successful older brother who he stayed with for a few years, but his brother later became an alcoholic and went to prison, leaving Mfuranzima alone again. “I remember I used to go hungry for days,” he says. “I had to trust God to provide. I was so angry with the devil.”

Although Mfuranzima’s childhood lacked all stability, he always did well in school, and by the time he got to high school he scored in the top five out of 400 students on a standardized test, which landed him a scholarship to a prestigious high school. “I spent a lot of time praying, and although I didn’t study much, God gave me knowledge,” he says.

In high school, Mfuranzima’s depression hit. His life had turned around and his future looked promising, yet he could not forget the pain of the past. “My whole life was filled with misery, and so I had to ask, is there a God?” He began worshipping by playing piano and writing songs instead of thinking about his pain, and soon he developed a close relationship with Pastor Emmanuel Ndoba of New Covenant Church in Kigali. Pastor Ndoba and his wife decided to adopt Mfuranzima and welcomed him into their home. “They made me their son and gave me my own room with a big bed,” Mfuranzima says. “They called me a blessing.”

Mfuranzima came out of his depression and focused on his studies, graduating first in his class of 42 in 2010. He is now fluent in five languages—French, English, Swahili and the local dialects of Rwanda and Burundi—and he hopes to study telecommunications at the National University of Rwanda. “I’ve come a long way, but I have a long way to go,” Mfuranzima says. “Just as God held my hand in my childhood, He will continue to guide me.”

In thinking about his generation, Mfuranzima says some of Rwanda’s youth rely too much on the government and struggle to find jobs. He explains that many young adults who lost their parents in the genocide now live in government housing and find it difficult to become self-sufficient, yet he believes most of his generation has strong faith in God and a lot of determination to fight for the country’s future. He points to the reconciliation movement under President Kigame, which has encouraged both Hutu and Tutsi to forget the past and look to the future. With more than 44,000 Rwandans in the higher education system, he believes more change and development is on the way.

“We’ve all had to forgive and forget the hate,” Mfuranzima says, “but we have hope for tomorrow.”