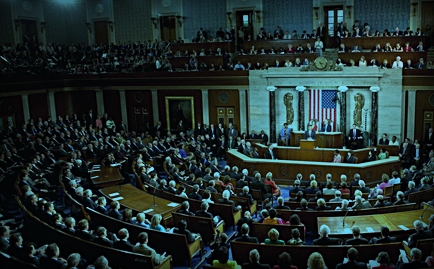 Eric Teetsel says that partisan bickering over the budget should be stopped by looking at the facts.

Editor’s note: This is the second part of a two-part series. For a
different angle on the budget from a Christian perspective, make sure
you also read part one, which you can do by clicking here.

An old lawyer’s adage goes, “If you don’t have the law, argue the facts; if you don’t have the facts, argue the law; and if you have neither the facts nor the law, just pound your fist on the table!”  There is a need for serious, informed debate about America’s budget crisis. Reforms will affect every American, especially those who most rely on Medicare. Unfortunately, much of the debate surrounding reform amounts to little more than fist pounding.

The “What Would Jesus Cut” campaign, devised by Sojourners, is a media blitz built on the suspect notion that we know what Jesus thinks about specific public finance questions such as government spending on Malaria prevention and the disabled. Since launching WWJC, Sojourners president Jim Wallis has doubled-down on the fist banging strategy by coordinating a fast and dialing up attacks on the Republican Chairman of the House Budget Committee (and brother in Christ) Paul Ryan. So much for civility.

President Obama’s recent speech on fiscal responsibility included claims that the Republican proposal offered “more than $1 trillion in new tax breaks for the wealthy” and would cause “50 million Americans to lose their health insurance.” Not just any Americans, but “somebody’s grandparents—maybe one of yours—who wouldn’t be able to afford nursing home care.” President Obama also argued that Ryan’s budget would cause poor children, children suffering from Down’s syndrome, and kids with disabilities to “fend for themselves.”

Such demagoguery is a far cry from the vision the president championed little more than one year ago at the Republican House Issues Conference when he said:

We’re not going to be able to do anything about any of these entitlements if what we do is characterize whatever proposals are put out there as, ‘Well, you know, that’s—the other party’s being irresponsible. The other party is trying to hurt our senior citizens. That the other party is doing X, Y, Z.

Liberals like Wallis and President Obama aren’t the only ones engaged in political gamesmanship. After making historic gains in the 2010 mid-term elections, largely on the basis of voter concern with the economy, Republicans proposed a series of spending cuts for the 2011 budget aimed squarely at the heart of the liberal political agenda, including the Environmental Protection Agency, Planned Parenthood, federal Housing programs, various United Nations projects, and enactment of the president’s health care law. It is disingenuous to claim to be foremost concerned with the non-partisan reality of the budget crisis while proposing solutions that are aimed squarely at the agenda of your political opponents.

It is time to end the fist banging and partisan pandering. We have the facts and we know the law. We can solve the fiscal crisis by implementing common sense reforms on both the programs driving the deficit crisis and the tax system. We must first identify what exactly is the problem.

In 2011, president Obama and Congress will spend about $3.83 trillion dollars on things like roads, social security, food safety, education and the military. The deficit will be roughly $1.6 trillion because we took in just $2.2 trillion in tax revenues. That is pretty bad, but the deficit problem is projected to worsen to over $9 trillion by the end of the decade due to the rising costs of our major entitlement programs: Medicare and Medicaid.

The first paragraph of the June 2009 non-partisan Congressional Budget Office’s report The Long-Term Budget Outlook spells out the problem plainly:

Under current law, the federal budget is on an unsustainable path—meaning that federal debt will continue to grow much faster than the economy over the long run. Although great uncertainty surrounds long-term fiscal projections, rising costs for health care and the aging of the U.S. population will cause federal spending to increase rapidly under any plausible scenario for current law.

Under the assumptions used for CBO’s long-term projections, government spending on activities other than Medicare, Medicaid, Social Security, and interest on federal debt—activities such as national defense and a wide variety of domestic programs—is projected to decline or stay roughly stable as a share of GDP in future decades.

Despite such a clear identification of the problem, many on the political left continue to offer solutions that don’t address entitlement spending. Instead, they propose cuts to military spending. While there are examples of fraud, waste, and abuse at the Pentagon that should be addressed, simple math proves that even the most radical reductions in military spending will not solve the crisis posed by entitlements.

The Left has proposed increasing taxes on the rich to cover the difference. It won’t work.

Even if every taxpayer was willing to subject themselves to astronomical rates, remember that the projected annual deficit ten years from now is $9 trillion. In 2008, the total taxable income was just $5.65 trillion for all taxpayers in America.

If the road to hell is paved with good intentions, the road to serfdom is paved with the pietistic convictions of the uninformed. Serious servants of the public good have recognized the need to fix the entitlements that support Grandmothers and handicapped children. Paul Ryan’s “Path to Prosperity” is one path towards accomplishing sustainable reform. By creating a voucher-like system for seniors and the provision of Medicaid block grants for states to allocate as they see most fit he reduces costs, localizes implementation, and maintains services.

This reform should be coupled with reforms to tax policy that increase revenues through simplification of the code and ending niche incentives.

In 2002 Americans spent $194 billion in compliance costs. Eliminating tax expenditures, such as the home mortgage interest deduction ($86 billion) and credits for employer contributions to health care ($94 billion), would allow for enormous across-the-board tax cuts without any lost tax revenues. Going further by moving from an income-based tax policy to a consumption-based approach would incentivize saving, reduce complexity and compliance cost, and generate sufficient revenues.

Implementing reforms to Medicare and Medicaid is going to cause trepidation among those who rely on these services. This only makes fear-mongering and ad hominem attacks more damnable. Respectable public servants may disagree with Paul Ryan’s plan, but any politician who claims to be serious about fixing the federal budget but is not willing to reform Medicare, Medicaid and Social Security is just banging their fist.

Eric Teetsel is a program manager at the American Enterprise Institute in Washington, DC. He blogs at www.commonsenseconcept.com/twocents.