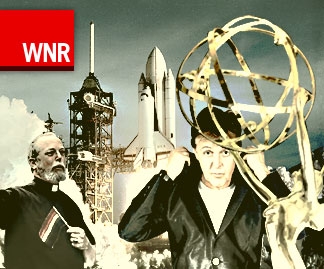 This week saw religious controversy, space-faring snafus, a
rock legend returning to his roots and good television getting its due. All
these stories defined the third week of July, 2009.

On July 20, the world will celebrate the 40th anniversary of
the first moon landing. To celebrate the momentous occasion of man breaking
the celestial grip of this watery sphere to challenge the very heavens, NASA
announced that the original recording of the moon landing had been taped over
decades ago. Imagine the frustration of NASA engineers when they decided to pop
in the moon landing tape for old times’ sake only to find it had been replaced
by a rerun of Three’s Company. In all fairness, it was an episode where Jack
inadvertently triggered a wacky misunderstanding with Mr. Feely, then fell
backwards out of his hammock. Totally worth it.

Norma McCorvey, better known as “Jane Roe” of the Roe v.
Wade Supreme Court Case, was arrested at a protest at the United States Senate.
McCorvey, who after winning a landmark decision that legalized abortion in
1973, went on to become an anti-abortion activist. McCorvey was at the Senate
with the pro-life group Operation Rescue to protest the confirmation hearings
of Supreme Court nominee Sonia Sotomayor. She was escorted from the Capitol
while saying, “You’re wrong, Sotomayor. You’re wrong about abortion.”

McCartney Back at the Ed Sullivan Theater

Paul McCartney mirrored The Beatles’ last public performance
this week by playing atop the marquee of the Ed Sullivan Theater for a taping
of The Late Show. The performance came 45 years after The Beatles’ first
appearance at the Ed Sullivan (back when Ed Sullivan was actually there), and
was his first appearance on David Letterman. He performed “Get Back,” and a
non-Beatles tune no one will care about. It was interesting to see McCartney
playing the rooftop concert without being overshadowed by more talented
bandmates like Ringo Starr.

The Emmy nominations came out this week, and, like the
Oscars, they added a few nominee slots. They also broke with tradition of
nominating the occasional standard-format sitcom by giving nods to brainier
fare like Mad Men, Flight of the Conchords, Family Guy and Weeds. Cable networks were the
big winners, with HBO leading the field at 99 nominations. With nominations
classing up a bit, the Emmy’s are set to become as notoriously selective as the
Golden Globes, or perhaps even the coveted Cable Ace Awards.

In a controversial move, the Episcopal Church voted
overwhelmingly this Tuesday to ordain openly gay bishops. It’s a move that
could see a widening in the growing rift amongst Anglicans worldwide. At their
convention three years ago, the denomination declared a moratorium on ordaining
gay bishops. They effectively ended this on Tuesday by affirming that “any
ordained ministry” is open to gay men or lesbians. The decision came despite
the opening remarks of global church leader Archbishop of Canterbury Rowan
Williams, who cautioned the body, saying, “Along with many in the communion, I
hope and pray that there won’t be decisions in the coming days that will push
us further apart.”

Music that Changes the World