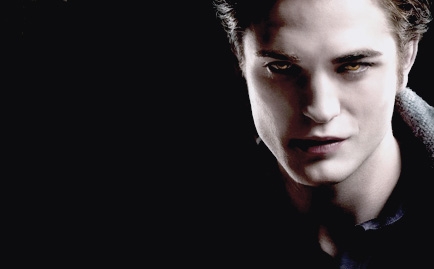 A while back, Russell Moore wrote an article that made the assertion that romance novels are to women as pornography is to men. While Dr. Moore was quick to admit that “pornography and romance novels aren’t (or at least aren’t always) morally equivalent,” he claimed that they “work the same” because they are both rooted in illusion.

It’s a great article and one that is especially relevant this week given the emotionally pornographic onslaught we are about to endure. That’s right—hide your kids, hide your wives, Twilight: Breaking Dawn is coming and there’s nothing we can do to stop it.

You have, on the one hand, Edward who is not so much a vampire as he is the embodiment of a chick flick archetype. We’ll call him “The Cultured Prince.” Edward is charming, polite, sensitive and “impossibly beautiful”—well-bred yet with an air of danger. He is, in short, everything any girl would ever want. (See also: Lon in The Notebook, Patrick Dempsey’s character in Sweet Home Alabama and every Tom Hanks chick flick role ever.)

On the other hand, you’ve got Jacob who is not really a werewolf but rather the embodiment of another chick flick archetype: “The Barbarian Prince.” Jacob is wild, passionate, fun-loving and adventurous—uncivilized yet alluring. He is, in short, everything any girl would ever want. (See also: Noah in The Notebook, Josh Lucas’ character in Sweet Home Alabama and every Matthew McConaughey chick flick role ever.)

And in the middle we have Bella, our everywoman. Actually, that’s not true. If Stephenie Meyer intended Bella to be the embodiment of femininity, she has done a poor job of presenting her as such, because just about every woman I know has more going for her than Bella does. Miss Swan is homely, insecure, stubborn, clumsy, shy, prone to obsessive behavior and completely lacking in self-awareness. In short, she is not an especially desirable heroine, and yet she is being furiously pursued by not one but two Prince Charmings.

What follows is an unrealistic and mostly unhealthy love triangle in which two emotionally unstable and supernaturally powerful alpha males duke it out for the affection of an awkward young woman whose only apparent ambition in life is to be married before she turns 19.

The relationships that develop are as insubstantial as the characters themselves. They’re all weepy looks and winsome smiles; all seduction and no substance. Obsession and infatuation are the rule of the day, and the counsel of family and friends is thrown to the wind as three teenagers wax poetic on the importance of eternal love, which, as we know, usually begins in high school.

In the same way that pornography creates false expectations for physical intimacy, Twilight creates false expectations for relational intimacy. It tells girls it is not unreasonable for them to expect to be hotly pursued by the two most desirable guys they know. It tells them their relationships should be defined by all-consuming passion from Day One. And it tells them their future boyfriends/husbands need not necessarily be “human,” but rather anthropomorphized checklists of masculine ideals.

As I write this, I’m reminded of a poster I saw hanging in a girl’s dorm room when I was in college. The poster had, “The man who wants to marry me will be …” written across the top, and the rest of it was filled with a list of prerequisites that may as well have been pulled straight from Edward Cullen’s Wikipedia page. I remember seeing that poster and thinking, “Sister, you’ve got a lot of disappointment ahead of you.” The guy she was looking for didn’t exist, and any guy who might actually want to marry her had already had the chips stacked against him by a fictional, bejeweled vampire.

These films aren’t just silly, teenybopper love stories. Twilight has become a cultural phenomenon, and cultural phenomena don’t simply reflect the values of their audience, they define them. Stephenie Meyer has now defined love for a generation of fans. For millions of “Twi-hards” around the world, the shallow, cliché-ridden romances of Edward, Jacob and Bella are not just the norm—they’re the ideal. They have traded marriage for a myth, and the question now becomes: How many more movies will it take until they can no longer distinguish between the two?

Hundreds Arrested in Occupy Protests Around the U.S.