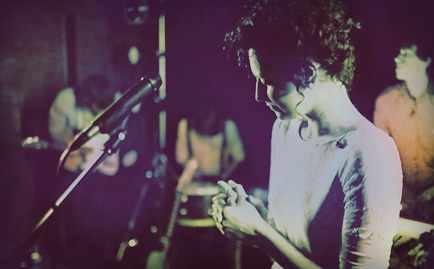 The family that plays ethereal electronic music together stays together. At least, that’s how it has worked for Kye Kye, an ambient band composed of the Estonia-born Yagolnikov siblings. Even drummer Tommy Phelan just became an in-law when he married lead singer Olga. But the group’s deep roots extend beyond their family tree. On their sophomore album, Young Love, you’ll find heartfelt words and a mature faith beneath the soundscape-painting guitars and angelic vocals. RELEVANT recently sat down with Tim and Olga Yagolnikov to talk about their upbringing, finding God and what they love about their new album.

What was it like growing up in a Christian home in Estonia?

Tim: Our parents came from a very conservative background. To an extent, we grew up in Christian homes, but there’s such a difference between growing up in a Christian home and actually experiencing a relationship with Jesus on your own. For the most part we went to Russian churches—and I don’t think this is just Russian churches, but churches in general—a lot of the time the message isn’t really grace-centered, it’s really kind of more legalistic, so to speak. It’s not for salvation, it’s for blessing or right-standing with God. I think that’s something we really grew up with and was engrained in our brains, and that’s when we started really getting into what it means to be a Christian, and understanding our right-standing with God. We’d never really heard it that way, or understood it that way.

You’ve referenced Acts 2:2 when talking about your conversion. Can you expound on that?

Tim: Me and my sister had been writing music for some time, but we kind of came to this point where there was lack of understanding for why we do what we do, and lack of understanding for what the Christian faith is all about. It kind of started with me, I would say. I just kind of came to a point where I needed to seek God with all my heart and find out what this is all really about. There was just a point where I felt like God just reached out to me and I felt the love of God at a level I’d never experienced before. That kind of propelled everything that’s been happening for the last two years or so. I kind of had this supernatural experience where one night I was getting into Scripture. That night going to bed there was essentially a loud noise I couldn’t explain. It sounded like a loud wind that went through my bedroom. I felt like I was standing next to Niagara Falls. That’s just the description I remembered of when the Holy Spirit came down at Pentecost. That was just a turning point in my life, and it propelled everything we’ve been writing about and growing in and understanding in the last year or so.

How did that experience directly affect your music?

Tim: You can definitely see a huge difference lyrically and musically—the main difference, I would say, is just more direction as to what we’re actually saying and what we’re talking about. As far as musically, I would say—there’s something we always talk about: We always say it’s not about creativity, it’s about how well you listen. For this new album, we’ve spent less time actually trying to write songs, and trying to come up with concepts and ideas to write about, and how to best explain what we’re experiencing. Instead, we’ve spent more time with God and getting to know who He is, and what that relationship looks like. I think that’s poured itself out into the music. For me it was almost as if the way that the sound was—and it lasted 30 seconds to a minute or something and then it turned off—it was almost as if someone opened the door to the spiritual world, or creaked it open a little bit, and I got to hear it for a second. It was just this thunderous sound that was louder than anything I’d ever heard, and then it closed up again.

Do you have any particular song from the album that means more to you than the others?

Olga: All of them are moving, but for me would be "My Sight." That song has to do a lot about imagination and the things that you imagine and dream about in your life. When something becomes really real to you, it starts overflowing. God’s words become our sight.

Tim: The song for me that kind of encapsulated what you were mentioning before is probably "Knowing This." You know how when you expect something to fulfill you, and when you reach that there’s actually no fulfillment in it? I think recording our first album kind of pushed me into that place where I expected to get some fulfillment from that, and I didn’t. After that I was just kind of like, "What’s the point of doing this?" That’s when I started trying to understand what being a Christian means. At that point I still wasn’t thinking I needed to write music, I was just thinking, "I want to know who God is." The moment I feel like it really transferred into us pushing into music was when I went to the beach with my wife for an anniversary trip for the weekend. Driving down to the coast, I just felt like God was putting on my heart that He wanted to speak something over the weekend. On that trip there was one night when my wife was already sleeping, and I just decided to go out and take a walk on the beach. I walked next to a castle that had been built earlier that day in the sand. I looked at it and God just totally spoke out to my heart and He said, "This is what the foundation was before," as far as music and everything else in my life. It was built out of sand, and it was easily falling apart and stuff. He just spoke out to me, like, "The foundation is finally the right foundation." That’s just a relationship from Him, and everything just kind of flows from that. That might have been maybe two or three months after the actual Acts 2:2 thing happened. That’s when me and Olga just kind of really got together and started pouring it out lyrically and musically. The order of the songs are actually in line with what we were experiencing; there’s an order and just kind of a growth from each song. And then it just kind of moves on from those experiences, like in, "Rooftops." The number -one thing you want to do when you’ve found the meaning of life is just proclaim it from the rooftops.

For more on why we love Kye Kye, check them out in The Drop of our May/June 2011 issue.