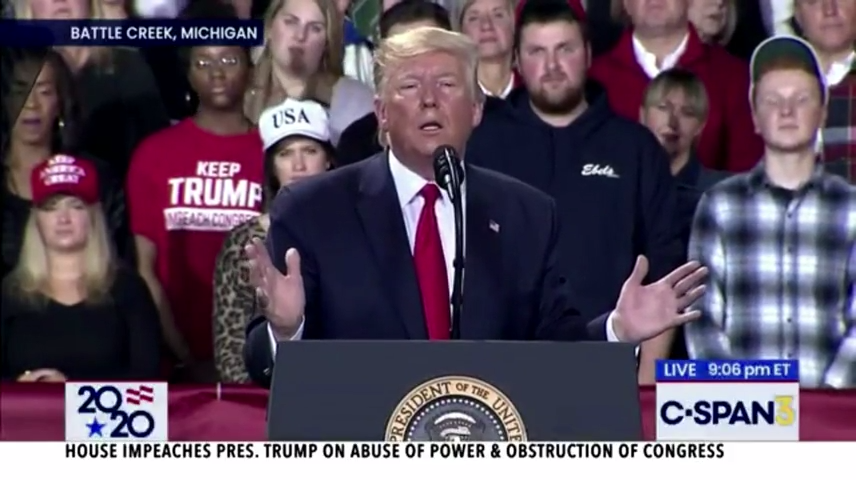 President Donald Trump is now famous for going off script during his famous rallies, sometimes to extremely toxic results. To whit, on Wednesday, Trump waxed about Rep. Debbie Dingell (D-Mich.) and her late husband Rep. John Dingell, suggesting the former Congressman was “looking up” from hell.

It happened at Battle Creek, in Dingells’ home state of Michigan, where Trump said Debbie Dingell had thanked him for “A-plus treatment” after her husband passed away. He said she had told him that her husband was “looking down” on them.

Trump was upset that Dingell had voted to impeach him.

Debbie Dingell responded on Twitter, saying “I’m preparing for the first holiday season without the man I love. You brought me down in a way you can never imagine and your hurtful words just made my healing much harder.”

Trump’s comment drew swift outrage from a number of faith leaders, including conservative commentator Erick Erickson, who has defended Trump in the past and said he plans to vote for him in 2020.

Christian recording artist Nichole Nordeman also spoke out, saying “it will be generations before this country fully realizes the stain & stench this man has left on the office. His behavior could not BE more anti-Jesus.”

But other religious leaders continued to defend him, many highlighting what they consider to be a spiritual, demonic attack on Trump. “Tonight we lift up our President, in prayer against all wickedness & demonic schemes against him and his purpose in the name of Jesus,” tweeted prominent prosperity Gospel preacher Paula White, who has been one of Trump’s staunchest religious allies. “Surround him with your angels and let them encamp around about him. Let all demonic stirrings and manipulations be overturned!”

Yesterday, President Donald Trump became the third U.S. president in history to be impeached, as the House approved both articles. The Senate will now pick up the trial, where a Republican majority will almost certainly ensure that he is not removed from office. Facing such historic consequences, many politicians would be careful to avoid controversy, but as has become clear over the last few years, Trump does things his own way.

Lamar Jackson on How God Keeps Him Humble