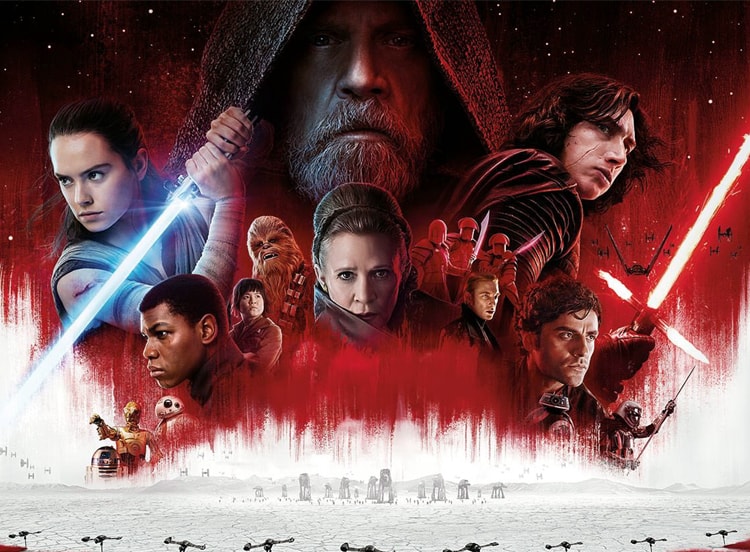 The Star Wars canon has had a global impact. The popular space opera has changed economies, revolutionized technology, and influenced culture in ways George Lucas probably never imagined. That’s not surprising given the impact stories have on our society.

But, why does Star Wars resonate with old and new fans alike? The saga showcases elements of truth—truth about the human experience, the cosmos, the character of a hero, and the nature of life itself. One could go so far to say that it parallels the greatest collection of stories ever told—the Bible. And, if the Gospel message is truly good news, would it be all that surprising to see similar ideas pop up in the Star Wars saga?

The power that binds everything together.

In A New Hope, Obi-Wan Kenobi tells Luke that, “[The force is] an energy field created by all living things. It surrounds us and penetrates us; it binds the galaxy together.” Similarly, the apostle Paul declares that there’s “one God and Father of all, who is above all, and through all, and in you all,” and that Jesus Christ holds all things together. In both narratives, the implication is staggering: from the smallest particle to the expanse of space, this power is all-consuming and arguably unfathomable.

The channel for the supernatural.

In the Star Wars saga, force users “become one with the force” and let it “flow through them.” Throughout Exodus, God performs many signs and wonders through Moses. He transforms a rod into a snake (twice), changes all the water in Egypt to blood, and more. And Moses isn’t alone; many of the Bible’s characters participate in works of the Spirit. Both spiritual perspectives hold that supernatural acts aren’t performed by people, but rather that the supernatural manifests through people.

The importance of meditation and prayer.

Qui-Gon Jinn meditates during the lightsaber duel with Darth Maul in A Phantom Menace. In Rogue One, Chirrut and Baze offer audible prayers. During his training on Degobah (and throughout his journey as an apprentice), Luke learns the power of serenity and prayer. Likewise, meditation and prayer are core spiritual practices for Christ-followers. David used meditation and prayer throughout his life, becoming known as a man after God’s own heart. The Star Wars saga and the Bible encourage us to spend time in quiet, spiritual reflection, especially in the midst of trial or tribulation.

The problem of fear.

“Fear leads to anger. Anger leads to hate. Hate leads to suffering,” Yoda says to a young Anakin Skywalker in A Phantom Menace. Fear is the path that leads to the dark side. The biblical narrative states that perfect love casts out fear, and there are many verses about the negative impact of fear. Fear, according to Star Wars and the Bible, prevents us from experiencing healthy spirituality.

The definition of evil.

Star Wars characterizes evil as the pursuit of selfish desire. Each example of evil, from the Imperial leadership to the Sith Lords and acolytes, is exemplified by the pursuit of power born out of self-ambition. In the Bible, evil exists prior to sin in the form of Lucifer and the other fallen angels who selfishly seek power apart from God. After sin enters the world, evil is generally defined as a focus on self as opposed to loving God and loving others.

Here is where we start to see key differences between Star Wars and the Gospel. While both worldviews allow for life after death, Christ-followers believe in a more personal experience. In the Star Wars universe, sentient beings either become “one with the force” or become a force ghost. The former means being assimilated into the force itself, whereas the latter refers to Jedi masters who have discovered how to live on as ghostly apparitions. But, in the biblical narrative, the spirit of the individual lives on in heaven in communion with God and others or eternally separated from the Creator. The significance of this difference rests in our choice of faith. Whereas all beings are assimilated into the force regardless their spiritual pursuits during life, the Bible declares that there are separate paths for Christ-followers and nonbelievers.

The goal of a spiritual life.

Perhaps the biggest divergence between the Gospel and the force lies within each perspective’s spiritual objective. In Star Wars, the overarching spiritual goal is balance. While this concept is not well-defined, it appears to be the most sought-after outcome. Balance can perhaps be best understood by exploring the contrasts found within the Jedi and Sith Codes. While Jedi pursue peace, knowledge, serenity, and harmony, Sith acolytes seek freedom by chasing passion, strength, power and victory.

In the biblical narrative, love is the spiritual objective. God is love. God created us in love and wants us to love Him, so much so that the greatest commandment for Christ-followers (our “Code,” if you will) is to love God and love others. The basic message of the Gospel is that God loved humanity so much that He sent Jesus to Earth to pay the penalty for our sins, resurrect, and now advocate on our behalf. The goal isn’t to balance evil and good, but rather to overcome evil with good and connect every human being to God through love.

Balance cannot rectify the injustices we experience in life. Balance will not make life meaningful. The love of God, however, attributes immeasurable value to humanity, giving purpose to and hope for our existence.

Star Wars and stories like it allow us to explore these questions and reflect on what we truly believe about the universe and humanity’s role in it. In a world overwhelmed with information and burdened by complexity, meaningful conversations can get lost in the litany of distractions we encounter each day. As we reflect on the true desires of our hearts and purposes for our lives, we must come to terms with deep spiritual matters.

[Editor’s Note: This piece originally was published on December 30, 2016 under the headline, ‘Where the Theology of Star Wars Breaks Down.’]