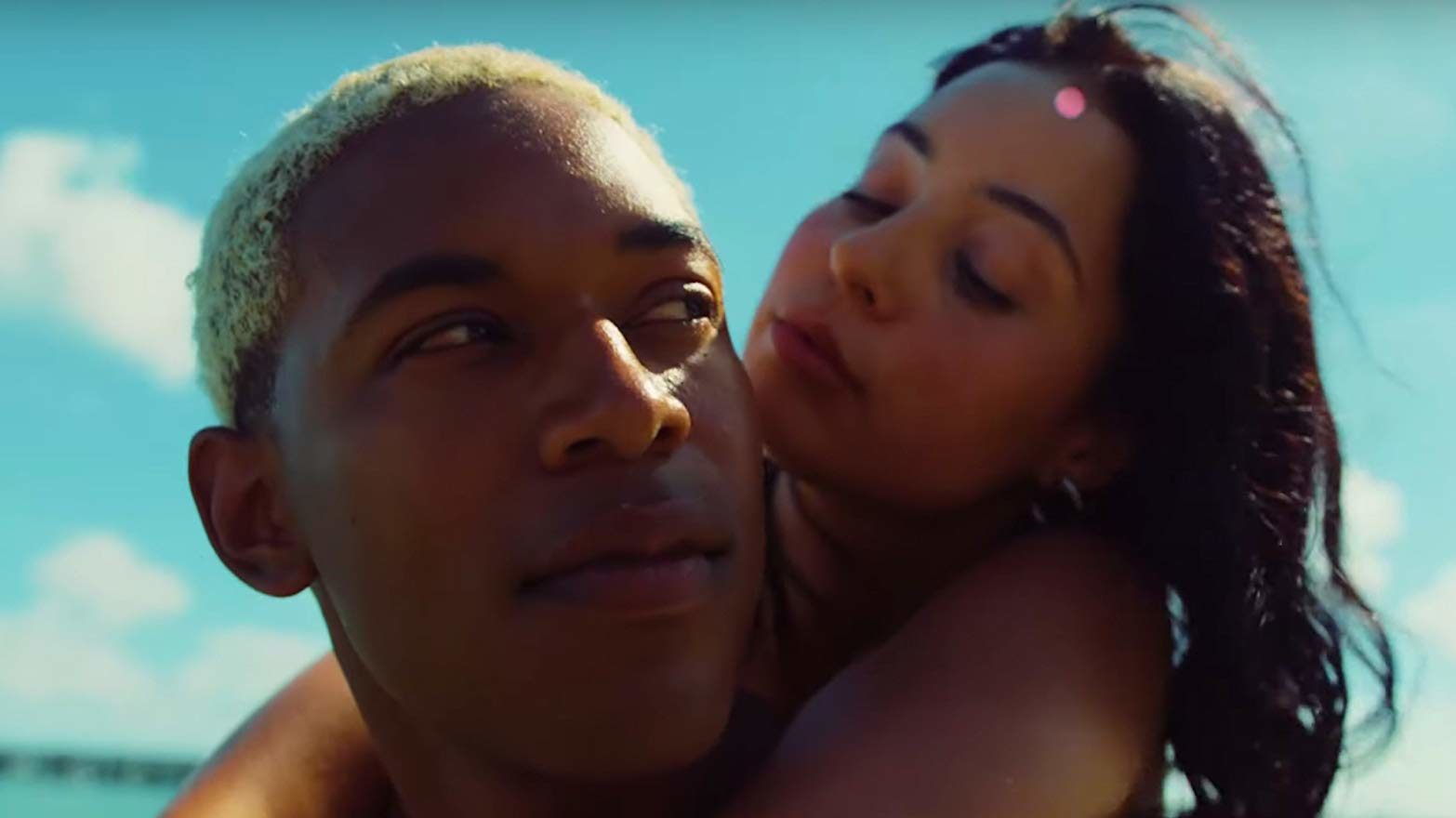 Waves is a difficult movie to explain or even write about. So much of the power of the film comes from its visceral jolts, the way it shifts — sometimes in a woozy delirium, sometimes with almost unbearable intensity — through an array of life’s moods.

The less you know about the movie’s plot, the better (you probably shouldn’t even be reading this if you haven’t yet seen it) but it’s the sort of movie that leaves you reeling, all set to some of the year’s best music — including a dynamite list of songs and a score from Atticus Ross and Trent Reznor.

New Orleans native Kelvin Harrison Jr. stars as Tyler, a gifted young athlete pushed to the limits of athletic potential by his father. Harrison is coming off turns in Mudbound and It Comes at Night, and is absolutely one of the most exciting young actors working in Hollywood today.

We sat down with him to talk about Waves, the difficulty of conveying real forgiveness on film and how acting as taught him to understand people he used to judge.

RELEVANT: What about Trey really drew you to him as director and a filmmaker?

KELVIN HARRISON JR: I think it’s just his honesty. I mean, Trey even when you look at [Shults’ debut It Comes at Night] about post-apocalyptic fear and paranoia, there still was so much heart in it and there was so much about  human behavior and family and just how we operate within each other. I was so moved after reading a horror film. So I was like, ‘If this guy can do that to that kind of movie then I want to do anything else he does.’ He so eagerly listens to his peers.

Trey told me that you started talking about the idea for Waves while filming It Comes at Night. How did he originally pitch this movie to you?

He didn’t! [laughs] He was just like, ‘There are two parts. There’s the brother in the first half that’s a wrestler, and then there’s a boyfriend in the second half. What part are you more interested in playing?’ And I was like, ‘The more challenging role!’ That ended up turning out to be the brother. That was the original pitch. I didn’t know what the movie was going to be until I got the script.

Tell me about what you saw in this character that really drew you to him as a challenge.

I think it was the tragedy in the film. There is so much fear around what things like this look like for those young black kids who go through this journey, so I was excited to demystify and dismantle that. [Tyler] can be flawed, he can be contradictory, he can be problematic, he can be all the things that everyone else in the world is but you can’t label him because of it. He’s just a boy.

The idea of taking on that challenge and trusting and going on this journey with Trey — which was built off of the trust and love for each other in how we saw these parallels between our lives — made me even more excited to stop letting people believe that white and black are so different.

Everybody’s a human being. We’re just doing the best we can every day to survive.

So you like the challenge of getting into someone’s head that feels very different than your own?

I’m always looking for something that expands my understanding of human beings. With Tyler, I did know that kid but I also judged that kid. I think a lot of the characters I end up playing, I usually have pointed a finger at and gone ‘Oh, I don’t like you because of A, B and C.’ But when I see a script as beautiful as Waves, you start to see ‘Oh my God, I’m not that much different from you. We’re all going through the same thing, I’ve just got to understand how you got to the place you got to.’

So when I’m looking for parts, I’m looking for something that will just broaden my understanding of the world and human beings so I can become closer to them, so that I can love them more, so that I can love myself more. I’m learning constantly through other people and myself in these parts, so that makes this all worthwhile. It’s really just the therapy in it all and how I can share that with other people.

He’s an athlete. I looked at athletes growing up, and I used to be like ‘You guys are d******bags and you’re really bro-ey and your testosterone is off the charts for no good reason.’ They thought they were cool, and I thought they were just dumb.

And then I started looking at Tyler and I was like, ‘He’s not dumb. That’s just the world that they live in.’ When I did wrestling training for three months, my coach was telling me to get mean, get angry. There are certain themes that are being reinforced and certain expectations for you to thrive.

Especially for a black man, I think this idea to break out and get a scholarship in a sport or in the arts to get an opportunity that we wouldn’t normally have because their parents can’t necessarily afford to send them to these good schools. They just don’t have those resources, so I understood more of the pressure [Tyler] feels. That pressure wasn’t all that different from me and my dad being an artist, and trying to tell me I needed to go practice every hour of the day and how much that did to my psyche and how much that did to my self worth when I wasn’t ready to become the person that he thought I should be.

Sounds like your dad pushed you pretty hard you were younger.

Oh yeah. I would go to school and then I would go home and have to practice two or more hours and then I would sing at the church on Sundays — that was my job — so on Saturdays, there would be choir rehearsals, Thursday night rehearsals, on the weekends was more practicing, on the summers I did three jazz camps. It was non-stop.

It was to the point where I said: ‘This is just stupid, I don’t even like music anymore,’ and ‘I’ll never be as good as you are at music.’ So I just resented it, and I was like, ‘I have no identity of my own. I don’t know who I am, I’m a little clone of you that’s less good. I’m just wack!’ My self-esteem got low and it just didn’t really work for me.

Obviously wrestling is a lot different than music, but the pressure you felt was probably pretty similar to Tyler?

Yes, yes. The pressure, for sure.

In talking to Trey about your respective lives growing up, how do you see the reality of race impacting your different experiences? You said you saw a lot of parallels. Did you see differences too?

It’s a difference of stakes. The stakes are high. I’m talking in action movie terms. When you think about the history of what Ronald [Tyler’s father in the movie, played by Sterling K. Brown] has seen as a father and how he views the world from a time when he didn’t live with the amount of privilege that Tyler had or the progression or the opportunities that Tyler had on the table for him. He sees America differently so he’s going to raise his son differently. He’s going to raise his son with a fear that will be different from the way Trey’s dad sees the world.

It’s about protection: to protect his black son in a world where he could be in the wrong place at the wrong time and everything changes for him like we keep seeing time and time again in the news.

So statistically, historically, the stakes are a bit higher [for black families], but the intention is still the same. I think that’s why we were able to combine these stories and make them make sense because, at the root of it, it is about love. It is about the generational differences between us. And I think, for the black family, it is about the question: ‘Is my son going to lose his life or is something bad going to happen to him because he’s black?’ And that’s that fear we go through in every scene with Tyler. Just wondering: Does anything bad ever happen?

Forgiveness can often look very cheap and unearned in movies. How intentional was it for you to avoid those cheesy notes and pat answers to create something more honest?

Trey had such a clear idea of where he wanted this story to go. He did ask me at one point, ‘How far do we want to get into this?’ I think we just wanted to justify that big climactic moment in the movie. Not to justify the actions but to justify how we go there and to understand how we got there.

In terms of just trying to tie it all in a bow, Trey never intended to do that. He was supported in that from everyone else. We all thought it was the most honest way to tell the story. I mean, family goes on and there aren’t always answers. We talked about our own experiences. I have a cousin who took his life a couple of months ago, and he dealt with substance abuse and he dealt with a broken home and he even went to prison at one point and he got out. What that looks like and what that is for him is so much more complicated for the family.

I think what we were interested in is: What is this family? How do we grow? How do we build? How do we heal? And how do we regain the trust within our own home so that we can move forward? It doesn’t happen today and it doesn’t happen tomorrow; it happens over time. I think that was a really important thing that we needed to highlight because that’s the truth.

Absolutely. Faith was always a part of Tyler’s experience. I think his family really ingrained that into him and he believed it. He believes in God. He believes in forgiveness. He believes in hope. But you have to live through certain things in order to appreciate those beliefs, and I think once he’s gone through what he did, he can really see it. I think he is understanding and appreciating love again. He’s understanding and appreciating family again. And he’s in a desperate need to be forgiven by himself and by his family. He’s in a moment where he’s trying to regain a sense of peace in his life where he feels like he deserves to live.

[Waves is in select theaters now. It will go into wide release on December 6.]
Tyler Huckabee

Could Michael B. Jordan Be Your Next Superman?