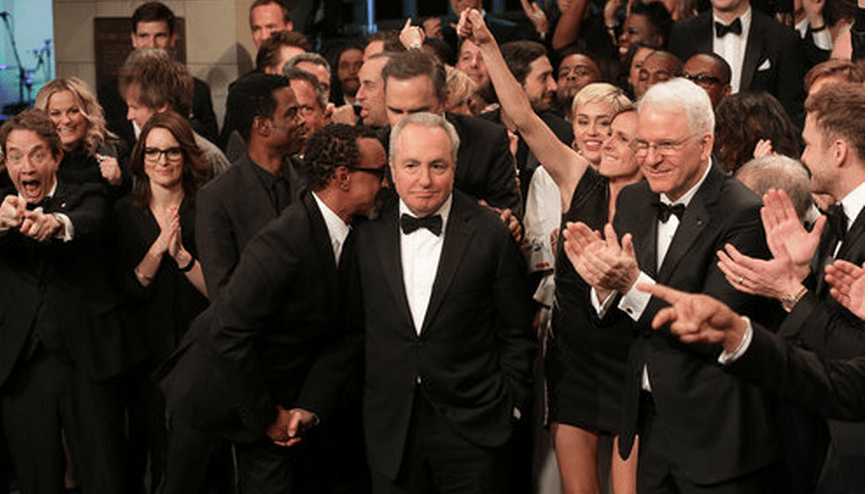 If you were on Twitter Sunday night, you may have noticed the jarring disconnect between those tweeting about Saturday Night Live‘s star-studded, 40th anniversary bash and those tweeting about a new ISIS video in which twenty-one Egyptian Christians are beheaded next to a waterfront in Tripoli.

There are no warnings on Twitter about what you’re going to see next. One moment, you’re reading an appreciation of Melissa McCarthy’s spin on Matt Foley living in a van down by the river. The next, someone is reeling from the news of ISIS’ seemingly boundless capacity for hate. It is, as Sarah Pulliam Bailey noted, whiplash.

Yes, but how are we to know which time is which? And how can we bear to laugh, when there is so much violence all around us?

Following 9/11, the Saturday Night Live writers were faced with a daunting prospect—reinitiating a time to laugh in a country still in the throes of weeping. On September 29—the first episode of the show’s 27th season—New York City Mayor Rudy Giuliani opened the show surrounded by NYC firemen and police officers. “Our hearts are broken,” he said. “But they are beating, and they are beating stronger than ever.” Paul Simon showed up to play “The Boxer.” It was a stirring, respectful moment. Then, SNL executive producer Lorne Michaels came out to thank the mayor and asked “Can we be funny?”

And Giuliani responded, “Why start now?”

It was a good line. The crowd relaxed a bit, laughed and then started cheering. Reese Witherspoon showed up to host, humbly acknowledging the evening’s tragic and unique circumstances, but promising that she and the cast intended to “give it everything we’ve got.” The show creaked into motion. America was finding her footing again.

There will always be the tired lines about how SNL isn’t as good as it used to be, a complaint nearly as old as the show itself, if not older. But even in its laugh-starved seasons, there does remain something oddly comforting about how it continues to just be there, no matter what.

When I was young, I remember that final saxophone solo being my cue for bedtime.

In junior high, I practiced my entrance for my inevitable hosting gig. Don Pardo would bellow my name and I’d stride out of that door with the carefree look of a young superstar still humbled at the prospect of performing in Studio 8h.

In high school, my friends and I gathered around to pour one out over Will Ferrell’s final episode.

In college, if I ended up alone on a Saturday evening (something that happened often enough) the SNL cast could be depended upon for laughs and comfort.

It’s usually funny. And even when it’s not, it’s at least familiar. That’s a powerful combination in a world in which so many things are sad and strange.

Dad always thought laughter was the best medicine, which I guess is why several of us died of tuberculosis. That’s one of Jack Handy’s Deep Thoughts that SNL referenced on Sunday, and there’s a good point buried in there. Whatever else laughter may be, it’s not medicine.

Perhaps it’s better to think of laughter as a sort of pain killer. In moderation, it can help ease the healing process, but it shouldn’t be mistaken for actual healing. Too many painkillers, and you’ll start thinking you’re all better and everything is fine. Too much laughing, you’ll probably start thinking much the same.

We live in a world of cancer, war, racism and ISIS beheading videos. Things are very clearly not fine. Humor can help us bear the pain of these things, and that’s about all they can do.

But we do need help bearing the pain. And if Steven Martin shouting that he’s a “wild and crazy guy” can do that, more power to it. As Charlie Chaplin put it, “Laughter is the tonic, the relief, the surcease for pain.”

That sounds a bit trite but, on Sunday night, as I tried to grapple with the enormity of what happened in Libya, Bill Murray singing “The theme song from Jaws” helped, in a small way. It really did.

A Time to Laugh

In the end, there are two temptations. One is to get so overcome by the world’s cruelty that we forget to laugh. We might even judge others for laughing while we’re in pain. Who hasn’t been there, sitting in a hospital room, wondering how other people can go on with their lives when things are so unbearable in our own? It’s a terribly hard lesson to learn, but we’ve got to learn it: there is a time to weep, but that time will be different for different people.

The other is the temptation to laugh so much that we forget to mourn. It’s easy for us turn to laughter like an alcoholic turns to whiskey. We numb the pain to the point where we’re blind to the world around us, and can’t take the pain of others seriously. It’s so easy, when we see a horrible story scroll by on Facebook, to continue on to the next YouTube video or Clickhole link. It’s also dangerous.

In the meantime, our Twitter feeds will continue to swing back and forth between the trivial and the traumatic, just like our lives. We don’t get to pick the seasons, but we can choose how we observe them. And as long as there are seasons to observe, we should be thankful for institutions like Saturday Night Live. Humor is not much of a weapon against the terrors of the world, but it is something.

Some days, we need all the help we can get.

‘Interstellar’ Will Be Back in IMAX Theaters This Weekend

Did the CIA Buy and Destroy Iraq’s Chemical Weapons?