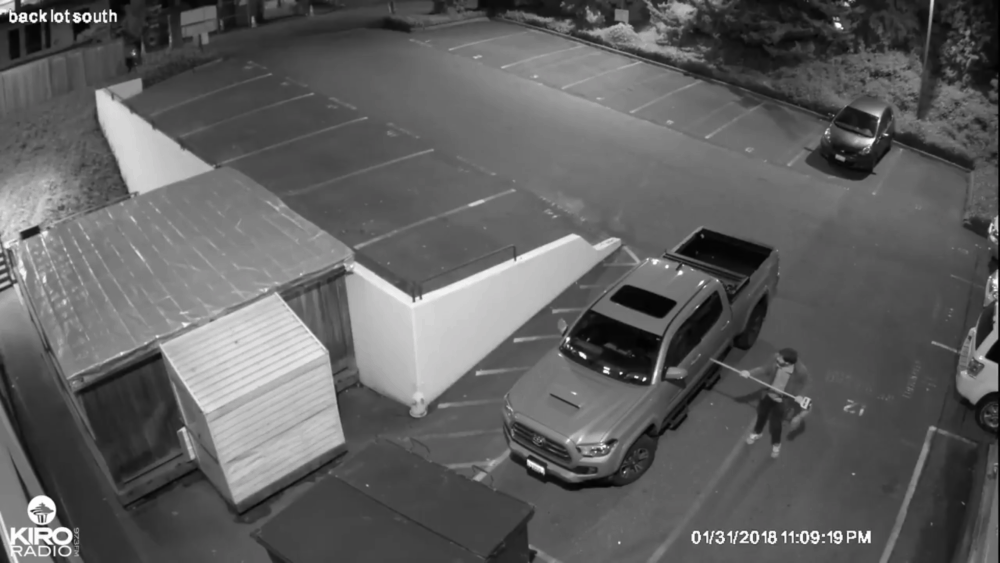 Generally speaking: Burglaries aren’t funny.  They’re also not usually narrated by a professional sportscaster, giving us the play-by-play … until now! Recently, a surveillance video started circulating the web of a guy trying to use a mop to break into a truck parked in the employee lot of KIRO FM, a local radio station.

When the folks at KIRO saw the footage, they decided to have radio personality John Curley dub a play-by-play of the suspect repeatedly striking the truck window with the mop handle. The suspect has the striking form that calls to mind a child trying to burst a birthday piñata. After several failed attempts to crack the window, the suspect climbs a nearby rooftop to perform a high-risk maneuver.

The commentary is stunning:

“He’s got a stance about shoulder-width and he has the mop at the top of the window! And then he hits and resets! He’s got his feet now moving apart looking just to the right to make sure no one’s around.

And he’s now positioning the mop again and slams it back into the window! Slams it a second time! That’s three! That’s four!”

We’re not thankful that someone at this radio station almost got robbed, but we’re thankful for their sense of humor and that they turned it into something we can all laugh about.

Take a look at the video below.

Last night we captured surveillance footage of a vandal trying to break in to one of our employee's vehicles in our parking lot. While the suspect is still at large, we took the liberty to have John Curley give his play-by-play of the incident.