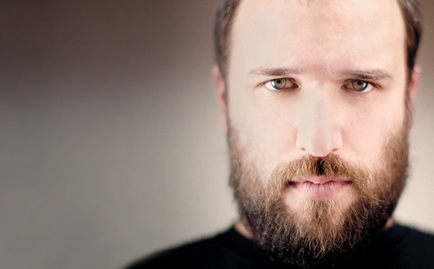 Check out our review of Curse Your Branches and stream the whole album (for free!) on The Drop.

After years of plumbing the depths of the human condition as frontman and songwriter for Pedro the Lion, David Bazan has turned his gaze inward. His new album, Curse Your Branches, is “90 percent autobiographical,” according to the 33-year-old musician, featuring songs that grapple with his faith and theology in general. It’s thought-provoking work packaged in shiny, low-key pop wrappings. Bazan, speaking from his home in Everett, Wash., explains why he chose to explore his personal struggles, and why he has eschewed playing traditional concerts in favor of intimate house shows.

This is your first full-length album under your own name. Is it safe to say that Pedro The Lion has been retired for good?

I’m pretty sure, yeah. There have already been (mostly joking) discussions of reunion shows, but when I stopped using the name in 2005, it was my intention that that was that.

Why did you decide to put Pedro the Lion on the shelf?

One of the reasons was I had some personal work to do. With Pedro the Lion, all of my buddies who I played with ended up getting chewed up and spit out, one by one. It certainly wasn’t my intention, and I didn’t know why that was happening. I had to step away from that and figure out how I was causing it to happen. And having stepped away from a successful band, I had to ask myself, did I like playing music for 40 people at The Local 506 in North Carolina? Did I like what I was doing intrinsically?

On Curse Your Branches, you tackle some dark subject matter, but you match it up with lighter music—was that intentional?

In a couple of key instances, it was. The song “When We Fell”—I’ve always performed it acoustic and very downtempo. When I put it in the mix of the record, it just kind of sucked the funny out of the room and was a real dead spot. But it’s one of my favorite tunes, and I didn’t want it to draw so much attention to itself immediately. When I did it a different way, it was more nonchalant, a much more complicated expression. In general, I like that way of doing things. A sad lyric and an uptempo tune—there’s something that has always appealed to me about that.

What can you SAY about the lyrics for the songs on Branches?

It’s maybe 90 percent autobiographical. This record hints at some historical facts in regards to me and my family where there were sort of dramatic moments. These [songs] are really obsessed with theology in the concept of my own history. It’s something that I think about all the time—the finer points of theology and its practical application in Christianity.

How does that translate to specifics on the album?

There are moments where I am challenging the person of God. I suppose I grew up thinking of Him as Jehovah, the biblical God. [The songs] “When We Fell” and “In Stitches” challenge the notion of that person, of the narrative of who Jehovah is, who the one true God is—the characteristics held by the one true God. I perceive that God exists. For whatever reason, that’s a part of my wiring. What I was trying to figure out was Who or What that could be—given the data that is available. This record is an expression of trying to complete that process.

When I wrote “When We Fell,” I was saying all those things to God, all of those assumptions about God that make up the narrative. That song is me refuting the idea that God is exactly that. A couple of months later, it dawned on me that I was really speaking to the popular version of what God is—the God of my upbringing and the most popular characterizations of Him. I realized I was literally challenging the person at the center of that characterization, challenging that characterization. At the end of it all, I still believe, but I don’t believe that particular narrative.

Has writing these songs helped you clarify the theological issues you struggle with?

I think maybe a good answer to that would be that those songs are one part of the way I’ve been processing information and thinking about things. It’s been really helpful to me. On the other side of that process, I have a lot more peace about it, even though none of the big questions have been answered for me. I’m a lot more at ease with where I am, and with a lot of things that I do. I’ve run the equations on several of those key issues enough times. I at least know the terrain pretty well and that gives me some comfort. I’m kind of moving ahead being pretty honest with myself or as honest as I can be. And the songs have certainly helped.

How does it feel to tackle more personal subjects after having written mostly fictional material for PTL?

When I realized I was writing autobiographical songs, I got pretty bummed. I already disliked the “singer/songwriter” category and thinking of myself as part of that. And when I realized every single one of these tunes is obsessed with religious conflict, I shuddered. “You gotta do something different. Go back to the drawing board and push for something else.” I’ve slowly come to terms with the idea that it might sound embarrassing and tedious to most of the population. These are issues that I care about and think about. And if the way that I’m expressing them is true, then I should own it.

For the last year or so, you’ve been performing at small house shows instead of clubs and theaters. How did that all come about?

Last Thanksgiving, Bob, my manager, and I were talking about how we would keep [stuff] together throughout the spring. The record was going to come out in late summer, but the label wanted me to lay low and not tour. I needed to figure out how to bridge the gap between what they wanted and making sure my family was taken care of. In our conversations, Bob and I came to the conclusion that if my work is to play songs, I should be able to go and play songs however I can, whether it’s concerts or house shows. When we said house shows, we both perked up.

How did the house shows turn out?

Every house and every group of people is pretty different, more so than from club to club. The overall prototype day on that tour, because I was touring alone in a pickup truck with a guitar, I’d get to the show at 7:30 and hang out for a bit and then play songs. There’s no PA or anything. The feeling in the room is really cool and really heavy and people are into it and we converse. It goes like that every day. It’s all the really fun parts of touring with none of the baloney. It’s really exhilarating.

Do you have any thoughts on where you’d like to go from here?

I do, but they’re mostly on a personal level. There’s a way of going about making records that I’m getting better at, but I’d still like the process to be less tortured. Some of that is natural; some of it is my disorganization. I’d like to get a little bit better at managing the process of making a record. There are certain things—certain self-improvement projects—that, if I can accomplish those and keep food on the table, then I’m good. That’s why the house shows were such a revelation. If that’s how I make my living from now on, I’m totally cool with that. I’m happy with the work that I’m doing and the songs and how I’m performing them. Any way that I can do the work I’m really into, and monetize it just enough to pay our mortgage and health insurance and whatnot, then that’s fine.

The Antlers: Brooklyn’s “It” Band

Catching Up With Joy Williams