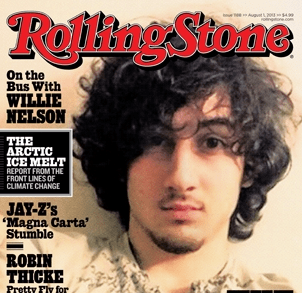 Both CVS and Walgreens have announced that they will not be carrying Rolling Stone‘s hyper-controversial Boston Marathon bombing suspect Dzhokhar Tsarnaev issue. While almost everyone agrees that Rolling Stone‘s story on Tsarnaev (written by blisteringly good investigative reporter Janet Reitman) is excellent, many are outraged that Tsarnaev’s face is now in a place generally reserved for only the most prominent celebrities (although past Rolling Stone covers have featured Charles Manson and Jar Jar Binks, so its reputation isn’t sterling.)

Rolling Stone released a statement on their Facebook page, saying “the cover story we are publishing this week falls within the traditions of journalism and Rolling Stone’s long-standing commitment to serious and thoughtful coverage of the most important political and cultural issues of our day.