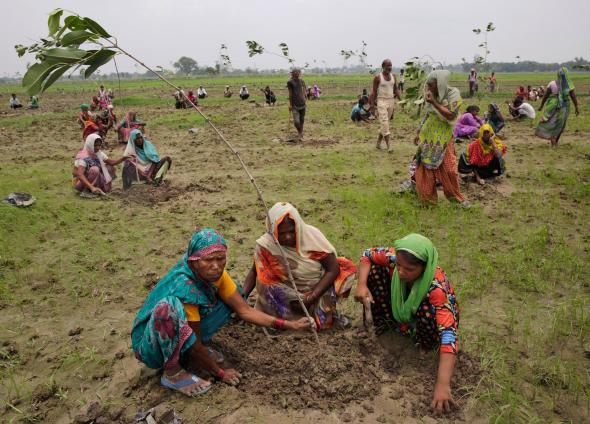 People in India is addressing climate change in a record-breaking way.

In 24 hours on July 11, more than 80,000 volunteers planted 49.3 million tree saplings throughout Northern India on public land and along roads and railways. The tree saplings were from 80 different species of tree that are all native to local nurseries.

The previous Guinness World Record for the most trees planted in a single day was previously held by Pakistan in 2013, with 847,275 trees.

This past Earth Day, India agreed to spend $6 billion to reforest 12 percent of its land, with a goal of having 29 percent of the country forested.

This mass-planting not only dents the reforesting goal, but it also helps to decrease the greenhouse gases and pollution in the atmosphere: Six Indian cities are on the top 10 list of cities with the most air pollution.

Many other countries are also replanting trees as part of reforesting goals—the New York Declaration of Forests wants to halve deforestation by 2020 and end it by 2030.

Officials will be monitoring the trees aerially to make sure they get the care they need to grow.