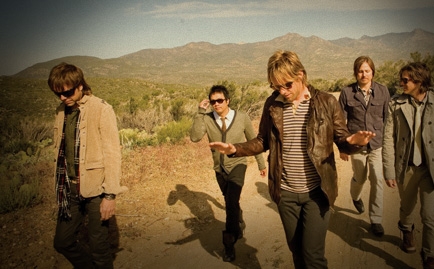 [Editor’s note: Check out our review of Hello Hurricane]

“A cynic is just someone with a broken heart,” Switchfoot frontman Jon Foreman says with the certainty of a motto. “Things tear you apart, and the easiest response is to tear something else down.” It’s a sentiment that sums up both his dismissal of and empathy toward those critics who would belittle him and his band.

Foreman is an enigma. Sitting on the floor of his band’s trailer before a concert, he’s friendly and eager to talk, but cautious … even, yes, jaded. “For me, I think there are many things that have happened that make me cynical, even about interviews,” he looks up and laughs as he says it—a jest, kind of.

“It feels like, ‘Why do we do them, what’s the point?’ … When I go on stage or do an interview, I try and remind myself that I am here to serve people. If they want to take what I said and use it then that’s an honor and if they don’t, then it’s not my responsibility.

“But I think the point is ultimately not about me. And if you approach the world with the apron of a servant, then you are allowed to go places that you can’t go if you approach it with the crown of a king.”

Now on Atlantic Records, this November Switchfoot releases its seventh full-length, Hello Hurricane, the band’s first album of new material in three years. The record reveals a new side of Switchfoot, while still including that familiar anthemic rock the guys hope will continue to resonate with audiences—and, perhaps more importantly, themselves.

“I feel like with this record, the motto was, ‘What are the songs you want to die singing?’” Foreman says. “We’ve all had incredible moments on stage playing songs that are enjoyable musically. It was a matter of trying to dig deeper and to figure out what are the songs we want to sing for the rest of our lives.”

Foreman jokes that in the beginning, playing music was just a matter of entertaining himself and friends while trying not to fail college—and, ironically, it was music that prompted him to drop out of college. But now, his vision for the band has evolved.

“I think there might be a few different evolutions of how we saw music interfacing with our lives,” Foreman says. He points to that first tour as a time when the vision for their music started to form. “We toured around the world and people really [were] listening to what we [had] to say. So we said, ‘Let’s dig a little deeper into ourselves, and into the political, spiritual climate to find topics to write about other than things at the top of your head.’

“I think that was a transition,” he continues. ”And then when we first signed to Columbia, I remember our goal was two-fold. We sat down in this room, this hip-hop studio where we were mixing a record, and you could smell weed everywhere. We were just trying to find a place where we could focus and not be distracted, and I remember the clarity of saying, ‘OK, we want to be salt and light in the world at large.’

“The second part was a revolution of ‘being,’ and the idea that it’s not a revolution of ‘doing.’ I mean doing is certainly part of it, but it’s being transformed within, more than it is trying to force something else down someone’s throat. And from there to today, I think that has been expanded, and caring less about what people think, and just being very sure of what we do.”

There’s something to be said for Switchfoot’s longevity. Over the past six years, the band has straddled that unyielding line between Christian and mainstream markets while maneuvering through the tangled web of major label bureaucracy at a time when the record industry continues to crumble. Through it all, Switchfoot has managed to maintain the same core lineup since forming in 1996. “We wouldn’t still be around if it wasn’t for the close friendship we have,” Foreman says.

Being labeled a “Christian band” has always been somewhat of a sensitive topic for Foreman. Switchfoot even stopped playing Christian festivals for a short spell after the double-platinum success of 2003’s The Beautiful Letdown.

“My thoughts on whether or not we’re a Christian band—I don’t think that’s our job to decide because I think people can call us whatever they want,” Foreman says. “I just think to have it as a blanket statement portrays a value I don’t really subscribe to.

“We’ve dissected our faith and made it a commercial commodity,” Foreman continues. “That’s why it’s got a stigma on it. That seems to be the reason from my perspective.”

Labels aside, Foreman has a lot of opinions on what it means to live as a Christian band—especially when it comes to issues of justice.

“I expect everyone to do social justice. ‘To whom much is given, much is required,’” he says. “Just the fact we’re here on American soil means we’re among the luckiest 98 percent of the world; we’ve got shoes, a pair of jeans, a fresh pair of underwear, opportunities to shower in fresh water. These are things you don’t take for granted when you travel.”

For Foreman, it comes back to fighting off that inner cynic.

“Cynicism for me, if I didn’t have belief in a God who loves me, I would be a very cynical man. I don’t think I would be alive anymore, there’s not much else worth living for.”

But he also admits his perspective on outreach, justice issues and even the significance of music has changed as he’s gotten older. “I have had moments in my life where I’ve been naive enough to think I’m going to change the world. And it’s a really incredible feeling, the day you discover that’s never going to be the case.

“So I think, ultimately, alongside of that has to be the corollary of truly trusting in the God of the Heavens. If this deity formed the stars and the space and actually cares about me, then as I abandon myself to Him, there’s a hope greater than some form of hope I’m going to drum up within myself. I will continue to attempt to achieve things in my life with music that means a lot to me, but that’s going to be against the counterpart of just enjoying and loving every moment of being alive.”

This article is adapted version of one that originally appeared in the November/December 2009 issue of RELEVANT.

How I Met Your Mother and Dual Citizenship

The Sneaky Trick of Envy