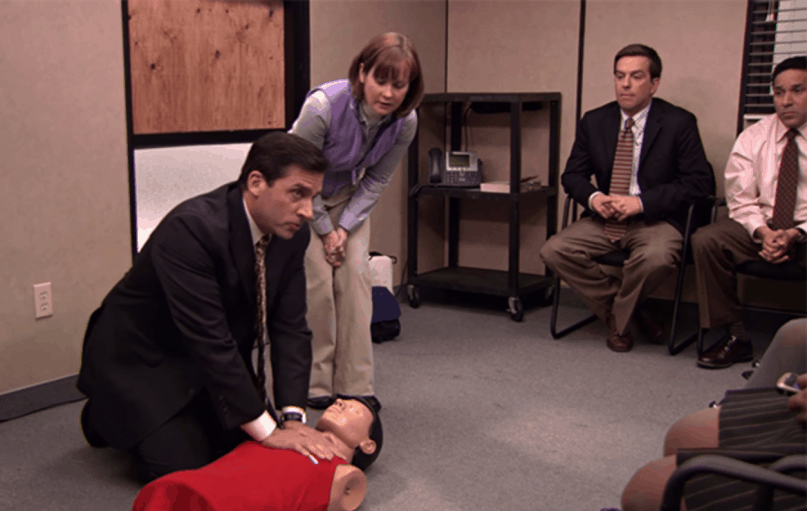 How could we even begin to quantify all The Office has given us? Mindy Kaling. John Krasinski. “Assistant to the regional manager.” Kevin’s pot of chili. The Dinner Party. And now, one woman owes her very life to the show.

According to the Arizona Daily Star, Tucson’s Cross Scott was taking one of his customer’s cars for a test ride when he saw a sedan pulled over with its hazards flashing. He pulled over to see what the issue was and saw a woman who appeared to be unconscious behind the wheel. He used a rock to break the window open and told two passersby to call 911. Things were grim. The woman had no pulse. Scott had to act. “I’ve never prepared myself for CPR in my life,” Scott told reporters. “I had no idea what I was doing.”

Almost no idea. Scott, being a cultured individual, has seen The Office. And moreover, he’s seen the truly excellent scene from season five, when Michael organizes a CPR training session for the Dunder Mifflin crew. Three of the finest minutes in American television history ensue.

Masterful, amazing, hilarious, perfect — one exhausts superlatives. But did you catch the genuinely helpful advice the CPR instructor gave Michael? Do CPR to the beat of “Stayin’ Alive.” Cross Scott caught it too, and he told The Star that he sang the song out loud as he did chest compressions on the woman, later identified as Carla. After about a minute of compressions, she woke up, and emergency crews arrived not long after to take her to the hospital.

The Washington Post spoke with Jonathan Epstein, the senior director of science at the American Red Cross training services, who said Scott may well have saved Carla life, although he recommended everyone go to an actual, non-NBC sitcom version of a CPR training session at some point. “Chest compressions alone are a benefit to the patient,” he said. “You can’t hurt them if they’re not breathing, so all you can do is make them better.”

We Ask You: Is Chance the Rapper’s Super Bowl Ad With the Backstreet Boys Terrible or Amazing?

How to Go on an Actual Date