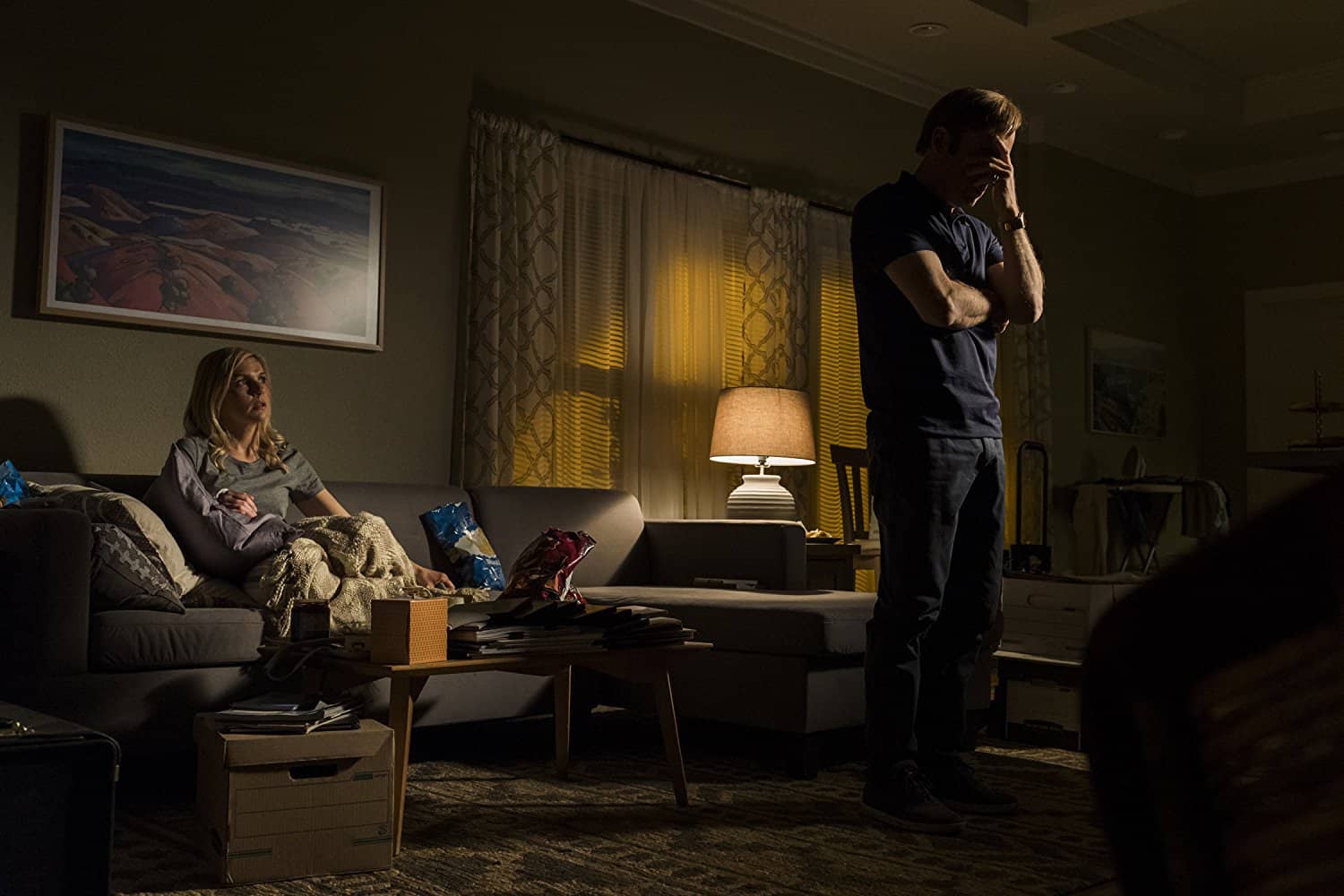 Alfred Hitchcock once explained the difference between surprise and suspense like this: Surprise is when a bomb goes off, and suspense is two people talking in a cafe, not knowing there’s a bomb about to go off. What makes Better Call Saul such an incredible show is how it’s found suspense in the people talking. The bombs in this show are always internal. [Head’s up, some season 4 spoilers can be found below.]

Case in point: The back half of Saul’s fourth season introduced us to a German excavation crew creating space for what will become Gus Fring’s meth superlab in Breaking Bad. One final explosion needs to happen, but right before detonation, the team discovers a faulty wire, and someone needs to repair it. Werner, the endearing and soft-spoken foreman, volunteers to check it out. Immediately we feel the Hitchcockian, kinetic suspense of the undetonated bomb.

The charges never explode. They rarely do on Better Call Saul. Instead we watch as Werner—up to this point calm and impenetrable—suffer a panic attack. The stress of this job, coupled with months of isolation from his wife of 20 years, is causing him to psychologically break down. By season’s end, Werner’s emotional explosion will do more damage than a physical bomb ever could.

While Breaking Bad was at times a masterful slow-burn character study, it could also accelerate the plot at a moment’s notice. Creator Vince Gilligan’s vision for Breaking Bad—to turn “Mr. Chips into Scarface”—carried a violent, visceral nature, which meant that bombs would most certainly go off, whether it was Walt’s bag of fake meth in Tuco’s office, an exploding tortoise in a desert, or a 737 detonating over Walt’s house.

One of the fascinating elements of Better Call Saul‘s fourth season has been its avoidance of external plot devices. Instead of the world pushing characters toward their actions, the main characters create their world through their actions. In the universe of Saul, characters make their own beds, then lie in them.

So Jimmy’s repressed guilt over his brother’s death is destroying his relationship with Kim and fueling his con artist impulses. Kim’s loyalty to Jimmy and shared guilt over Chuck’s suicide causes her to self-destruct any time she’s close to happiness. Mike’s disdain for the law and himself in light of his son’s murder drives him further into Gus Fring’s drug cartel.

We know Jimmy McGill will eventually become Saul Goodman, but we’re not sure when Jimmy’s amoral instincts will blow up in his face. We’re not sure where Kim is going to end up at the end of the series, but we know her loyalty to Jimmy will fuel whatever ending she encounters. The suspense in all these storylines comes from inside the characters. We don’t know when these people will self-destruct, but we’re four seasons in at this point—it’s going to happen soon.

When a television show is scripted we call it fiction, and yet the duel sides of Jimmy we see in the season four finale—he fights to give a scholarship to a girl others only see as “the shoplifter,” but also takes advantage of his brother’s suicide to be reinstated as a lawyer—allow for a level of human nuance more true to life than any black-and-white person you’ll find on cable news. For a show about drug dealers and crooked lawyers, Better Call Saul lets people be complicated, a mixture of good and bad, noble and selfish.

During cultural moments like the Kavanaugh hearings, we needed a clear hero and villain. A world in which people can be good and selfish, noble and monstrous or honest and deceptive is scary. Dangerous. Suspenseful. It’s easier to create clean narratives that eliminate the unknown and make us feel safe. But when was feeling safe ever the point of being Christian?

As Breaking Bad accelerated toward its ending and became less morally complicated—by season five, Walt was pure evil, Jesse had a heart of gold and literal Nazis had shown up—it became more popular. By contrast, Better Call Saul has remained a slow-moving, demanding, explosions-avoidant character study, and it has the ratings to match. Saul asks a lot of its viewers. You have to consider the full spectrum of good and evil when considering its characters. It makes you interrogate your own values as you interrogate what’s on the screen.

Season four of Saul ended with Jimmy McGill taking his biggest step yet toward becoming Saul Goodman, and it’s very possible that as Saul enters its home stretch, its Hitchcockian tension will start to involve real bombs. The show can do that well, but the shift in approach might mean Jimmy has to detonate his humanity and go beyond redemption. That’s one note of suspense I don’t want to lose.