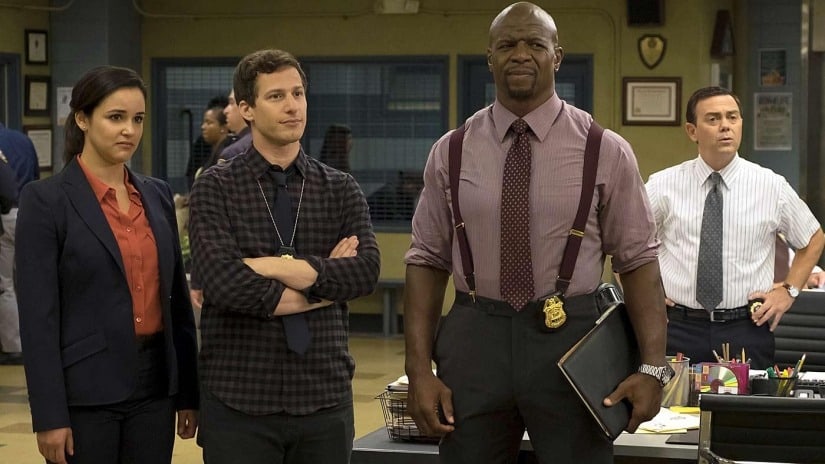 Yesterday, FOX announced the cancellation of Brooklyn Nine-Nine. It was a tough break. The workplace sitcom was one of the most beloved shows on the air, and over five seasons, it had grown into something you might put alongside The Office and Parks and Recreation as one of the most charming half-hour comedies of recent television. Alas, it’s no more. NINE NINE!

Brooklyn Nine-Nine kicked butt. It had one of the most talented comedic ensembles on TV thanks to some bold casting and character decisions. Not the least of which was slotting drama veteran Andre Braugher as the stone-walled, buttoned-up Captain Raymond Holt. Seriously, this guy can compete with Ron Swanson and Michael Scott as one of the best bosses in a sitcom. Andy Samberg, Melissa Fumero, Stephanie Beatriz, Terry Crews and Joe Lo Truglio rounded out the main gang. Together, they were one of the most well-balanced (and representative!) collectives in television.

We’re not the only ones sad to see Brooklyn Nine-Nine leave. Twitter was aflurry last night with abbreviated eulogies for the network sitcom.

This cold open alone is why #Brooklyn99 should be renewed. #RenewB99 pic.twitter.com/eAxerOPNRC

I will miss Brooklyn Nine-Nine, a show that gave us Raymond Holt, who the world badly needed. pic.twitter.com/DakPDYFxQa

The fight to revive the show has already started. Leaders in the clubhouse seem to be Hulu (they have exclusive streaming rights to Brooklyn Nine-Nine, so, uh, shoot ’em a subscription if you want) and Netflix. Universal Television could also shift the show to NBC, and TBS is on the table, too.

Of course, there’s also the nightmare scenario: Brooklyn Nine-Nine doesn’t see any renewal at all. Ugh. We don’t even want to think about that. We need more Terry-time.

Spotify Is Removing R. Kelly From All Its Playlists for His ‘Hateful’ Content