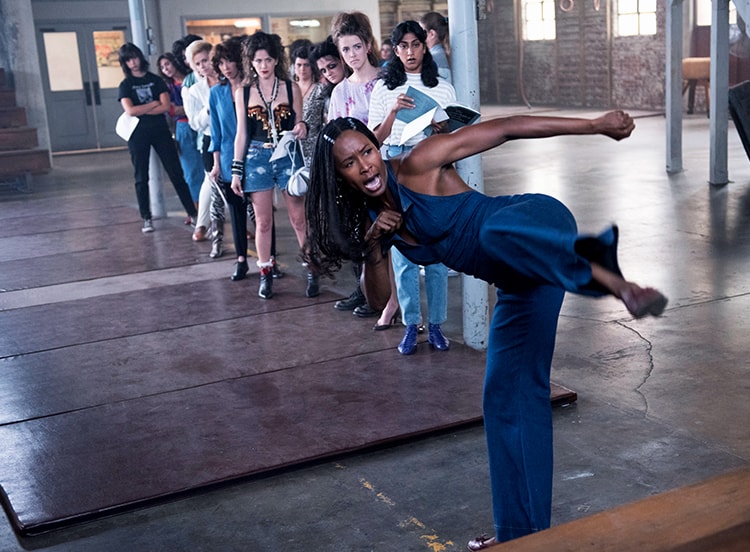 First things first. Netflix may have just mined ‘80s nostalgia, a la Stranger Things, to create the biggest hit summer for the second year in a row.

GLOW, an acronym for “Gorgeous Ladies of Wrestling” tells a heavily fictionalized version based on true events of what happens when down-on-his-luck Hollywood director Sam Sylvia (celebrity podcaster and comedian Mark Maron) attempts to cash in on the 1980s professional wrestling craze by creating a Saturday morning wrestling show with an all-female cast.

At open auditions, he meets the plucky yet overdramatic Ruth (Alison Brie of Community and Mad Men fame), an aspiring actress bound and determined to shoehorn her dreams of serious dramatic roles into a gig that’s mainly about big hair, fake falls and all-around exaggeration.

Whereas Stranger Things tapped into the nostalgia and wonder of childhood in the Reagan era, even for those too young to have lived through it; GLOW is, at its surprisingly deep heart, the universal story of the 20-something journey of stumbling towards who you will become.

On paper, the Netflix originals are (literally) worlds apart. The former dances the line between science fiction and horror in Nowheresville, Indiana and the latter tells a story of schlock and excess in the seedy underbelly of Los Angeles.

GLOW may be a comedy in a 30-minute package, but it pushes the viewer to deal with weightier issues than actors performing fake body slams.

The concept for GLOW came together when writers Carly Mensch (Orange is the New Black, Weeds) and Liz Flahive (Homeland) were writing together on Showtime’s Nurse Jackie and discussing a female-centric project when they stumbled upon the 2012 documentary GLOW: The Story of the Gorgeous Ladies of Wrestling.

The writing duo does an excellent job of avoiding cliched jokes about the decade—characters waving gigantic cell phones around and inquiring about what CD players are—that plague film and TV projects set in the hair-metal era. Which is likely due to the fact that the time period was chosen not for the leotards and Swatch aesthetics but as a vehicle to explore the effects of 1970s feminism.

“We wanted to look back on the ‘70s–coming out of the women’s movement–and into the ‘80s, and ask the question: Did it work? Did things get better?” Flahive told Rolling Stone.

Gender issues aren’t the only hot-button topics the show takes on. As the troop comes together, a young, hot-shot producer insists on casting the wrestlers as stereotypes. A black woman, who took the part to help pay her son’s Stanford tuition, is cast as “Welfare Queen.” An Indian-American is ordered to embody the “Towelhead Terrorist” persona, despite her protests that she’s Hindu, not Muslim. A Cambodian woman is told to take on a Japanese character, playing into the perception that all Asians are smart, shy and skilled at martial arts.

If this sounds too far fetched for a true story, the 1980s TV show featured “Little Fiji,” “Little Egypt,” and “Little Feather,” all portraying explosive ethnic stereotypes, as well as the indefensible “Jailbait,” a tag-team crew of women portrayed as teenage girls. It’s even more gut-wrenching when put into the context that the 1986 original aired on Saturday mornings and heavily targeted elementary school children. Mixed into the wrestling are silly rapping sequences and sketch comedy that wouldn’t be out of place in vintage Saved By the Bell episodes.

Rather than try to paint over this gut-wrenching aspect of the source material, Netflix puts this issue front and center. Mark Maron turns some excellent scenes as director Sylvia struggling to keep his job while attempting to convince the bosses that there’s a better way of storytelling than scraping the very bottom of the barrel for the lowest common denominator.

It would be easy for a show trying to make points about America’s racial sins to become preachy, particularly in 2017. But GLOW never falls into the trap of being heavy-handed, trusting the audience to distill the moral from the story, rather than spelling it out. It’s one of the most important elements that keeps this both funny and vital all the way through season one.

SIN AND LONELINESS IN TINSEL TOWN

The entire plot is driven forward by a serious moral failure committed by Ruth, the small town midwesterner who relocates to the West Coast to chase her dreams. She falls into an affair with a married man, and the confusion and guilt around the sin swirl around her every action, both in and out of the ring.   In one of the most poignant moments of the season, Sylvia asks her why she did it.

“Why does anyone make a stupid horrible mistake?” Ruth replies.   “For me, it’s usually because I’m high or drunk,” Sylvia says. “Or someone has done something to make me feel so small or so insecure that I have to do something to remind myself I exist.” The scene closes with Sylvia telling Ruth she’s an “OK person.”

It’s a vivid reminder that movies and TV often play the part of a doctor who can diagnose the problem but are unable to offer a solution. Ruth earns the title “home wrecker,” and falls into an isolated, friendless existence. Unlike the nighttime soap operas that fill up cable TV, GLOW doesn’t just use sex, lies and betrayal to keep the audience hooked. Instead, the emotional and interpersonal fallout is dealt with in a realistic way. Still, like the me-first attitude of the 1980s in which the show is set, GLOW doesn’t know what to do with sin.

Characters ingest drugs, lie and hurt one another and the story doesn’t seem to offer much of an answer outside of a message of “bad things happen sometimes.”   Which shouldn’t dissuade you from streaming the best summer show of the year, and one of the TV highlights of 2017. GLOW is funny, whip-smart and has boatloads of heart.

And if the characters seem well-intentioned but lost, let it serve as a reminder of the complicated, beautiful and messy people in your own life who have never been introduced to Christ as a way to change after the tragedies that characters like Ruth find themselves in.   There’s a lot to think about and a lot to talk about here. It’s a rare feat to start with ‘80s nostalgia and dive so deep, so quickly without sacrificing laughs along the way.