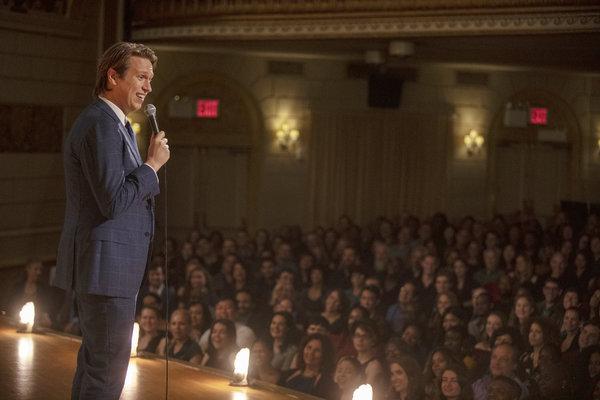 Crashing was an odd duck from the jump, one that seemed like it would have a lot of appeal to the formerly religious divorced white guys with an interest in stand-up comedy set but very little beyond. The fact that HBO took a chance on Pete Holmes’ semi-autobiographical dramedy is a little strange in and of itself. The fact that it was good is even weirder. The fact that it found enough of audience to warrant three seasons is downright bizarre.

But good it was, in spite of its niche-of-a-niche premise. While the show’s elevator pitch — awkward, newly divorced man seeks to make it in the comedy biz — had little to recommend it, Crashing was about comedy in the same way Friday Night Lights was about football. That is, the comedy business gave the show some nice wrapping, but the real treasures were inside.

For context, Crashing followed the career of Pete Holmes, the show’s writer/creator/star who didn’t even bother to give himself a fictional name here, who launches off the discovery of his wife’s infidelity into the world of open mic nights and stand-up bits, trying to make a name for himself on the New York comedy scene. The biggest obstacle to his dream is that he’s a deeply basic Christian and entirely sheltered from the seedy, scandalous, sex-drugs-and-swear-a-minute comedy scene. His theological framework operated very smoothly until something went wrong. Now Holmes is stuck with a tangle of deeply held Christian beliefs in a world in which none of them really match up to his reality.

White Christians make up some 70 percent of this country, so it feels not quite correct to say there’s a lack of representation of them in media. There isn’t. But there is a lack of honest representation of them — shows and movies in which the Christian experience in modern American society is depicted with anything approaching lived experience. The generally well-received 2004 Christian high school satire Saved! wasn’t without its charms, but it lacked the feel of authenticity. Jim Carrey’s Bruce Almighty has some laughs and can be credited for broadly introducing Steve Carell to the world, but its faith content splashed around in the shallow end of the pool.

But in an era in which most Christian millennials admit to some complicated feelings about their faith tradition, Crashing felt like one of a kind. In Crashing, Holmes’ character doesn’t go through distinct seasons of belief and doubt, but rather experiences belief, doubt and — let’s face it — indifference, simultaneously, attempting to work the faith he was raised in into an intoxicating cocktail of new experiences. As a newly single man in a scene not well-known for its high standard of ethics, Holmes gets drunk, high and laid with an attempt at abandon, but he’s still haunted by God and gives an ongoing relationship with God a real college try, no matter how much he’s mocked by his new comedy biz peers.

And that mockery is, if not exactly good-natured, then certainly not the same sort of bad faith scorn depicted in the God’s Not Dead franchise. The reactions to Holmes’ faith in Crashing felt much more genuine to the real world, in which non-religious people don’t despise faith but are sometimes confounded by it.

They aren’t necessarily spoiling for a lawsuit but they do want to know what’s up with God telling Abraham to sacrifice his own son or why King Saul demanded a hundred foreskins from David as payment for marrying the royal princess. In the show, Holmes’ comedy career gets some traction on the Christian comedy circuit, where he’s able to poke fun at a faith tradition he doesn’t entirely relate to anymore with some loving jabs, including a particularly funny bit about Lazarus getting annoyed at being summed back from the dead. The Christian comedy tour is portrayed as odd, to be sure, but not off-putting. “It’s nice,” Holmes later explains to a friend. It pays well. The crowds laugh. The music is comforting. Holmes isn’t really in that world anymore but he is of it. No changing that.

Mostly, Crashing was willing to be honest, from its unflattering portrait of Holmes himself — who rarely succumbed to the temptation to glamorize his experiences — to its portrayals of comedians.

In Crashing, beloved figures like Ray Romano, John Mulaney and Artie Lange play themselves as inconsiderate jerks, bloated egomaniacs or even, in Lange’s case, heroin addicts. Everyone’s got some sort of hangup in Crashing’s world, and everyone’s medicating that hurt in their own way — be it with drugs, dates or the divine. The show didn’t exactly pass judgment on any of those coping mechanisms, which was maybe the most honest thing about it. Holmes has been open, with this very platform, about his own process of deconstruction. It’s an ongoing thing. He’s not comfortable judging anyone else. Maybe he never will be.

The end of Crashing finds Holmes achieving some level of success on the comedy scene and, what’s more, ending up with the woman we figured he should have been with all along. It felt a little rushed — like the creators were a little surprised to find their own heads on the HBO chopping block — but it resisted the temptation to put a bow on what had never been a tidy show.

Crashing didn’t find any particularly revelatory answers in its exploration of how people grapple with an evolving faith, but it aired the questions in a refreshingly honest context, one that came from a place of genuine affection and identification. And even if this is indeed the last we see of it (producer Judd Apatow has hinted at interest in a movie) then it will have at given shows about faith something very rare: proof of concept.

Christian Leaders React to the Mass Shooting in New Zealand