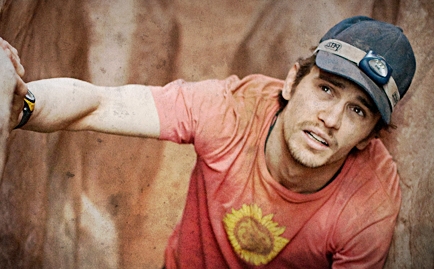 Why Doubt Isn’t a Dirty Word

Imagine you’re enjoying a day of rock climbing in the middle of the desert. You’ve hopped in your car alone, hoping for solitude, and you’re just cocky enough you didn’t feel the need to leave a note or tell anyone where you were going.

But what if that test went way beyond a day of sweat and exercise and wound up risking your life? What thoughts would race through your head? Would you find faith in God, build on it or lose it? And if somehow you were able to make it out alive, how would it affect the rest of your existence?

Heavy questions to be sure, and ones most of us will never have to face. But Aron Ralston was forced to stare each one of those quandaries down seven years ago, when a boulder landed on his right arm during a solitary climbing excursion, trapping him for more than five days before he finally had to do the unthinkable: cut his forearm off in order to escape and survive.

That ordeal turned Ralston into a worldwide celebrity, leading to his best-selling book, Between a Rock and a Hard Place, and a movie aptly titled 127 Hours, which is up for multiple Academy Awards this weekend, including Best Picture. Starring James Franco as Ralston, the movie is the latest unconventional modern classic from director Danny Boyle, who has developed a reputation as one of the world’s most eclectic filmmakers through a body of work that’s ranged from Trainspotting, to The Beach to the Best Picture-winning global smash Slumdog Millionaire [editor’s note: check out our interview with Boyle by clicking here].

Resting almost entirely on a brave and daring performance by Franco—who happens to be hosting the Oscars this weekend, where he’s also nominated for Best Actor—127 Hours is a story of overcoming the odds, of human ingenuity, of the fragility of life and that desperate, overwhelming determination to survive. It’s an inspiring story, but not exactly one for the  faint of heart.

“People who walk into the film are going to remember this is the guy who cut his arm off, but I hope they’ll be happy by the end,” says Ralston, who now uses an artificial limb with a prosthetic hook for his hand. “It was the most intense pain I’ll ever experience, but I grinned from ear to ear because I was gonna get out of there.”

Ralston managed to capture much of his entrapment with a small camera he’d brought along on his hike. Expecting to die, he hoped somehow the camera would be discovered and sent back to his mother as a final goodbye.

Ralston had only shown the real-life footage to his immediate family until he got word Franco was preparing to play him in the film. “I actually got to see the real videos Aron made,” Franco says in a separate conversation. “He’s told his story to hundreds of thousands of people, but on video, it’s more pure because it’s not Aron telling of the experience—it’s him in the middle and not knowing if he’s gonna get out and have a happy ending.

“He believed he was going to die and was making messages up until an hour before he escaped,” Franco continues. “You could tell there was a lot going on underneath, that he was determined to put up this dignified kind of demeanor so his mother and father could watch him without seeing him losing it.”

Prior to his fateful trip, Ralston had been the kind of lone-wolf daredevil who went wherever he pleased, often ignoring calls from his mother and leaving his friends behind for days at a time. So when he climbed into a crevasse, more than 100 feet down between giant rock formations miles from civilization, it was but one instance in a long line of Ralston tempting fate. The boulder that slipped and crushed his arm, however, was the consequence Ralston never really imagined would happen.

But the film leavens its most difficult scene—while it is cringe-worthy, the sequence depicting the amputation, takes up only three minutes of the film’s 90-minute run-time and cuts back and forth (no pun intended)—with plenty of touching and deeply human ones. Ralston is shown thinking back on his life—about the girlfriend he largely ignored and allowed to drift away, about the calls he didn’t pick up from his own mother because he was “too busy” to deal with them.

It’s in these flashbacks Ralston attains a reckoning of his life that ultimately enlightens and frees him, forcing him to understand the selfishness with which he was living. He also disconcertingly starts having visions of his future, particularly of the young son he doesn’t yet have but feels he was meant to create as a key part of his existence.

“[Aron] was 27, not thinking about being a father,” Boyle says. “But he knew it was his lineage, a connection to the future that we all seek. We all want to pass on life and try to do it decently—that’s what life is about. Knowing he had those thoughts vividly was a wonderful discovery, and it dictated the rest of the film, the style of the film and how we could come in and out of the first- and third-person  points of view.”

Boyle wove those visions into the film to help break the claustrophobic tension of the film and give viewers a breather from Ralston’s ordeal, but the moments serve to add a deeply emotional resonance as well. And as Ralston teeters on the edge of death before finally figuring out how to save himself, the film powerfully shows the real-life people he thought of along the way.

The undeniable question remains, however: How did Ralston finally decide to risk amputating his limb? And how did Franco and Boyle manage to find a way to depict that horrifying experience without ruining the film’s seemingly uplifting goal?

“It was really an epiphany, a eureka moment,” Ralston recalls. “I knew within an hour, right after the accident happened. I said out loud, ‘You’re gonna have to cut your arm off.’ But it was a very deliberate process: On the second day I figured out how to do the tourniquet. The third day I tried sawing through my arm to no avail. The fourth day I was like: ‘Aha! I did it!’

While the movie effectively conveys the horrific decision to amputate and unflinchingly depicts the process (and indeed much of the film is spent in anticipation of the moment), its power still resides in the inner journey Ralston underwent. Thinking back on how the event changed his lifestyle, the 34-year-old notes he spent the first five years after his recovery pushing the limits again to prove to himself he was still a complete person.

But in the past couple of years, after meeting and marrying his wife and the birth of their son, Ralston has come to realize he has a greater responsibility now to stay alive and play things a little bit safer. His connections to his own family and his parents are both front and center in his mind these days.

“I think my sense of faith was strengthened, my worldview was affirmed,” Ralston says. “In the physical world, there are spiritual energies beyond everything that connect us all. My physical self was stripped away, but what was left were the connections with people in my life. When we are connected through love to other people is when we’re most alive [and] have our greatest sense of resolve and courage.

It was those themes of mortality and relationship that Franco says he drew on most. Dressed in a plaid shirt and jeans, with a thin mustache hanging over his lip because he has “to look like a 1920s mobster for a small role,” his thick New York accent at moments can be as challenging to follow as Boyle’s British tones, yet his enthusiasm is still obvious.

“Certainly that kind of material and the way we approached it was very appealing to me,” says Franco, waving his arms expressively throughout each answer. “Examining a person by stripping away everything he’s used to in life, and [he] has to face life with just the essentials, figuring out what life is made of and staring death in the face.”

Ultimately, this is the message of 127 Hours: Even when we feel most alone, we have a connection to others that keeps us going and drives our will to live. The film sticks in the minds of its viewers not because of its gruesome moments, but its most kind and humane ones.

It’s a tale of massive transformation on a small, personal scale—of an individual’s life changing forever, over the course of five days.

“When my mom first saw this, she was holding my hand,” Ralston recalls. “The amputation scene is over and we all made it through, but as I hike out and the music builds, my mom’s squeezing my hand so hard I think I’m losing my other arm. We’re involuntarily rocking in our seats, and she’s going: ‘Thank you, God! Thank you, God!’ That’s what a beautiful gift this is. That’s what Danny did for me.”

This article is excerpted from a much longer one that appeared in RELEVANT. To read more articles like this, you can subscribe by clicking here.