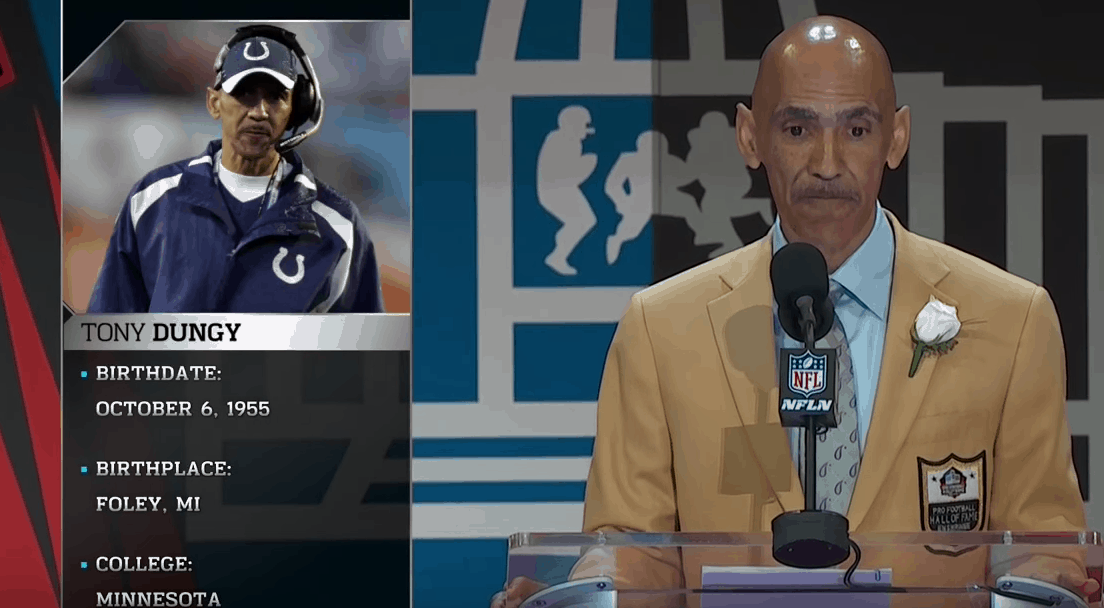 Legendary NFL player and coach Tony Dungy was among those inducted into the league’s Hall of Fame this weekend, and during his speech, acknowledged the role that his personal faith played in his life, on and off the field. The two-time Super Bowl winner (as both a player and a coach), told the crowd in Canton,

[W]hen I got the news, my first thoughts were of all the people God placed in my path to help make this possible. It started in Jackson, Michigan, and I couldn’t have had a better upbringing. I’m just sorry that my parents, Wilbur and Cleomae Dungy, aren’t alive to see this, because they’d be so proud.

My mom taught us as a Christian, your character, your integrity and how you honor God were so much more important than your job title. One of her favorite Bible verses was Matthew 16:26: ‘What would it profit a man to gain the whole world and forfeit his soul. And I know that she’s happy to know that her son never forgot that verse.

Dungy was truly a groundbreaking figure in the NFL. In 2006, he became the first African-American coach to win a Super Bowl, and during his speech, acknowledged 10 African-American assistant coaches who played a major role in his life during the late ‘70s.

It was a small group of men, just 10 of them, if you can believe that—African-American assistant coaches in the NFL. Many of them never got the chance to move up the coaching ladder like I did, but they were so important to the progress of this league.

Those men were like my dad. They didn’t complain about the lack of opportunities. They found ways to make the situation better. They were role models and mentors for me and my generation of young African-American players. So tonight as I join Fritz Pollard as the second African-American coach in the Hall of Fame, I feel like I’m representing those 10 men and all the African-American coaches who came before me and paved the way, and I thank them very, very much.

You can see the entire speech here.

Awesome: There’s Going to Be a ‘New Girl’ and ‘Brooklyn Nine-Nine’ Crossover Special This Fall