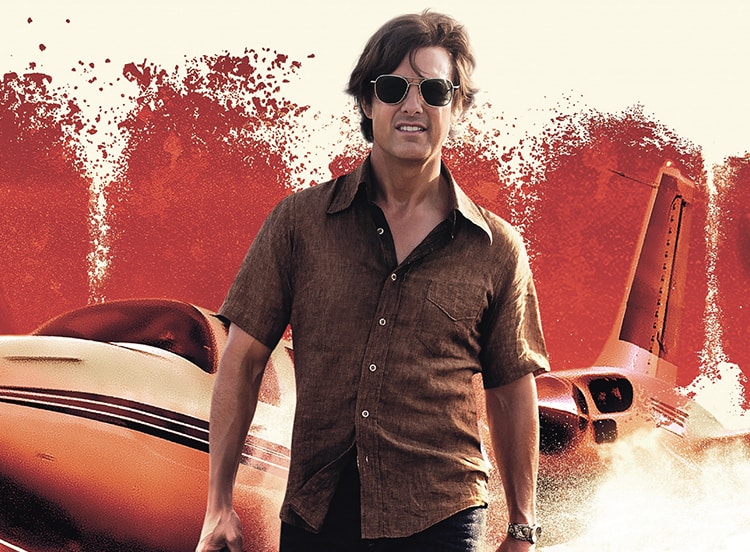 Americans love cowboys. Or at least the mythological equivalent of traditional gunslingers and herd wranglers. In a broader sense, we tend to associate the term “cowboy” with someone who might be brave, daring, or at times, a redeemable outlaw. That is, someone who does bad things for the right reasons.

As audiences, we typically overlook the terrible things a cowboy might do because we believe these unfortunate actions are needed to satisfy the stakes established by the plot. No one seems to mind that the “Magnificent Seven” commit mass murder because they’re, of course, protecting innocent people, and they have to ignore legal jurisdiction and due process in order to do it. That said, we can actually see a deconstruction of the cowboy as a sympathetic figure through Tom Cruise’s portrayal of Barry Seal in American Made, directed by Doug Liman.

In the late 70s, Barry Seal was just a TWA pilot. Then a CIA handler (played by Domhnall Gleeson) cornered Seal on smuggling cigars right before offering him a job to take surveillance pictures in other countries. From there, Seal begins a decade-long misadventure smuggling everything from drugs, guns, and even soldiers back and forth between North and South America, sometimes for the CIA and other times for a drug cartel, foreign governments, and even the White House.

Cruise and Liman worked carefully to bring the story of Seal to life in the most cinematically interesting way possible. It’s a high-energy movie that combines the rapid editing of a documentary with the entertainment value of a breezy action drama, complete with authentic stunts and location shots. The result is a two-hour thrill ride disguised as a loosely-factual history lesson, laying out the case for how morality and the American Dream both intersect and diverge.

As expected, it’s enjoyable watching Tom Cruise play an anti-hero after so many years of seeing him be the conventional good guy protagonist (let’s just pretend that The Mummy never happened). Still, it’s difficult to label Seal as either an anti-hero or outright villain, when in fact he’s really just an adrenaline junkie who says “yes” to everything, no matter the risk or consequences.

Yet there’s also a hint of desperation in all of the dangerous situations that occur in American Made, as Seal has to say “yes” just to survive and/or make sure his family is provided for. He’s often coerced into questionable ethics, but he doesn’t appear to struggle with them. Only his wife, Lucy (played by Sarah Wright) ever brings these pertinent questions to the forefront, and that happens rarely throughout the film as she quickly becomes complicit in their new lifestyle.

So it can be difficult to understand why Barry Seal is easy to root for despite all of the terrible things he did. In interviews, Cruise has said that those who knew Barry Seal in real life loved him in spite of his flaws, and this seems to hold true for a lot of public figures who overcome scrutiny through outward affability.

But we can’t forget that Seal’s actions had devastating consequences for countless people around the globe, summed up by the massive Iran-Contra scandal during the Reagan administration. During the movie, Tom Cruise’s roguish persona keeps the character basically likable and worth investing in, but by the end, it’s clear that Liman has something different to say about the American Dream and how many of us can be just as easily swayed by the perks of moral relativism.

The American Dream is, of course, the notion that everyone in America should have an opportunity to achieve personal success through hard work and patriotic determination. It’s often measured in financial terms, as in the picket fence and house in the suburbs, or perhaps the building of a profitable business. In American Made, Seal seems to justify his immorality (and amorality to an extent) because he finds the American Dream worth attaining by any means necessary. He uses this ethos as a platform to grow his wealth exponentially as opportunities continue to show up for him, never mind the moral implications of what he specifically does and allows to happen.

There’s something unique in our affection for our anti-heroes, even when they turn out to be one of the largest drug smugglers in American history. American Made can be viewed as a drive-by commentary on situational ethics, in the sense that Seal decided what was right and wrong in small moments that “felt” right or “felt” wrong. When Pablo Escobar offered him a deal smuggling drugs, Seal certainly took into account what would happen to him if he said “no.”

At the same time, he seems content with a deal that would make him plenty of extra money. After he makes enough cash to last him and his family a few lifetimes, he still does it because we can see that he likes it. The challenge excites and motivates him. Doing the wrong thing feels good, so to Seal, it’s good.

The movie never takes a direct stance on how much of Seal’s ethics were based on survival, greed, pleasure, or a mix of all three. It’s more interested in showing the vignettes and letting you put the pieces together. From where I sit, there’s an obvious thread uniting all of Seal’s ethical dilemmas to prove a simple point about moral relativism as a cautionary tale. We may see ourselves as the cowboy, doing bad for the sake of good and confusing integrity with boredom. But when we we forsake moral authority or an objective sense of right and wrong to satisfy that fiction, we shouldn’t be too surprised by the painful results. Who would have guessed a Tom Cruise movie in 2017 could bring up such an ethically charged conversation?