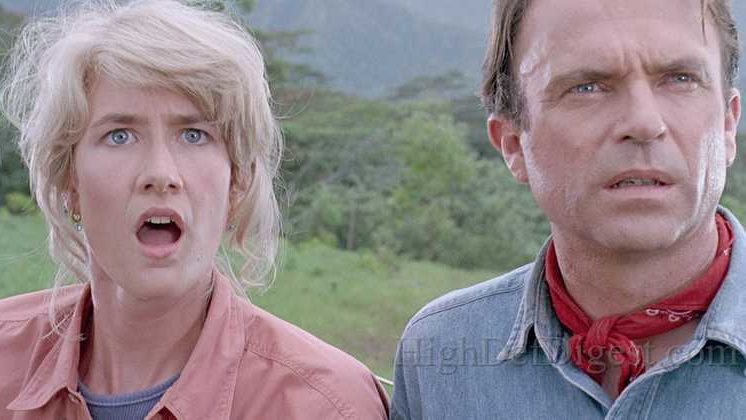 You ever read a story that just seems perfectly fine-tuned to your exact sensibilities? Look, we won’t presume to know exactly what your sensibilities are, but assuming you’re into political scandals, dinosaurs, young-Earth creationism drama and a “dubious documentary” involving the homeschool community, you’ve come to the right place. Or rather, you’re almost there: Charles Bethea’s full report is at The New Yorker, and you should read the whole thing.

It all started in a town called Dinosaur, Colorado (just wait), where North Carolina Congressman Mark Meadows sold a hundred-plus acre chunk of property to our old friends at Answers in Genesis — the Ken Hem-helmed outfit devoted to disproving evolution. Meadows failed to note the sale on his congressional financial disclosure form, which is required by law. Why would Meadows decline to record such a seemingly benign transfer of cash? Well, as reported in The New Yorker, it may be because this chunk of land in Dinosaur, Colorado is currently enmeshed in an unflattering spat among members of what The New Yorker delightfully describes as “the contentious and controversial world of creationist paleontology.” Now try to keep up here, because things get a little complicated.

Back in 2002, Doug Phillips, a one-time lawyer for the Home School Legal Defense Association and founder of the now-shuttered Vision Forum Ministries, organized a fossil hunt for evangelical homeschool families that included some time in Dinosaur, Colorado. Phillips’ partner in this venture was a Florida entrepreneur named Pete DeRosa. Shortly after the trip, Vision Forum sent out a press release announcing that a nine-year-old homeschooler had discovered an allosaurus skull during the trip and that the skull showed evidence of having been buried quickly — perhaps by Noah’s Flood. (Not surprisingly, paleontologists The New Yorker spoke with disputed some of the details there).

Vision Forum released a documentary about the find called Raising the Allosaur: The True Story of a Rare Dinosaur and the Home Schoolers Who Found It, and the documentary establishes the allosaur skull as a “critical tool” in the “battle over origins.”

There was just one problem. According to multiple reports, a nine-year-old homeschooler didn’t actually find the skull at all. It’d been discovered several years earlier by Dana Forbes, the man who owned the property, and excavated in 2000 and 2001 by a different creationist named Joe Taylor.

Taylor told The New Yorker that “we trusted everybody to make an honest report, and they were claiming in their P.R., and then the film, that these little homeschooler kids went in search of an allosaur, found an allosaur, excavated the allosaur, plus a stegosaur and a one-hundred-and-twenty-foot-long sauropod that’d be about thirty feet tall, all in four days.”

Taylor said that even if the homeschool paleontologist team had discovered the fossils in question, the idea of conducting such an excavation in a brief window of time was “utterly ridiculous.”

In 2004, Taylor and DeRosa attempted to bury the hatchet with the help of a third-party mediator, as per Paul’s instructions in 1st Corinthians. The foundation offered Taylor $124,843.75 for the skull, which Taylor called “a bad deal that we had to accept,” left him $90,000 dollars debt. The foundation would later value the fossils at $450,000.

A few months after the contentious dig, Congressman Meadows — who had been on the expedition with his homeschool family — purchased the land. The reason behind the sale is unclear, and Forbes was hesitant to answer questions about the sale. But as The New Yorker notes, the U.S. is one of the few countries in the world in which fossils found on private property belong to the landowner instead of the government — meaning any narratives formed around such discoveries are entrusted to whoever owns the land.

The mediation agreement reached by Taylor and DeRosa included a “non-disparagement clause”, which Taylor was found to be in breach of in 2007 by yet another third-party arbiter. He was ordered to pay $100,000 as punishment in a note that read, “How sad that among Christian brethren, we are torn apart by pride, greed, and bitterness,” remarking that the discovered fossils “could have, and should have, been a major victory in the culture war for those on the Creation science side.”

In 2013, Phillips shuttered the Vision Forum after admitting to an affair with a woman who claimed he began grooming her when she was just 15 years old. Her lawsuit was settled out of court.

All the men interviewed for the piece (Meadows declined) take pains to speak without too much bitterness of each other (“I don’t want to paint A.I.G. in a bad light,” Taylor says. “They’re doing good work.”) but it is clear that the situation was never really resolved to everyone’s satisfaction. A campaign finance lawyer named Brett Kappell told The New Yorker that Meadows’ failure to disclose the purchase puts him in violation of the Ethics in Government Act — compounding the sanction he received last year for inappropriately handling sexual harassment charges leveled against one of his staffers.

Meadows has never publicly identified as a young-Earth creationist, but Taylor said he wasn’t surprised at that.

“Any politician is going to try to limit stories with hard questions they don’t really know the answers to, or it’s embarrassing that they were involved with,” he told The New Yorker. “It happens all the time. I mean, I’m surprised this allosaur story has stayed still this long. I’m surprised it hasn’t broken as a major Rachel Maddow story.”

Check Out the Mesmerizing First Trailer for ‘I Lost My Body’