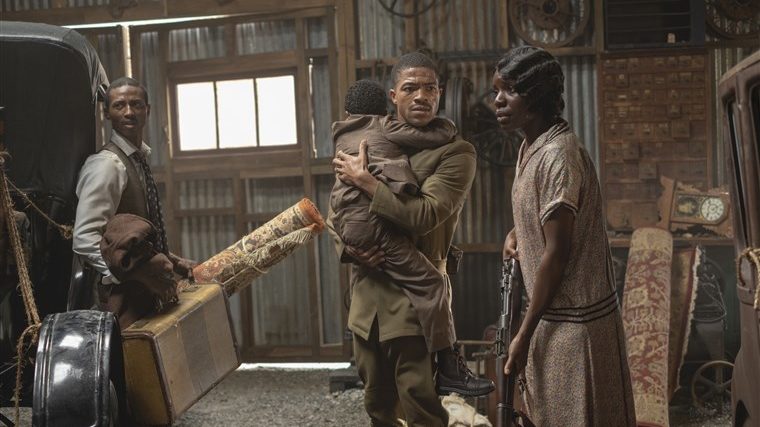 On Sunday, HBO debuted the pilot for The Watchmen, Damon Lindelof’s big comic book adaptation that is clearly aiming to claim the premium cable crown abdicated by Game of Thrones.

The pilot brought in big numbers and solid reviews, which ought to make execs happy, but the conversation has largely centered around the episode’s stunning opening scene. An eight-minute-long recreation of the horror and hell of the 1921 Tulsa Race Riots. It is, according to The Encyclopedia of Oklahoma History “the single worst incident of racial violence in American history” and, while within living memory of the present, has been all but scrubbed from memory. The Watchmen catapulted the event into a trending topic over the weekend, inspiring many to investigate the massacre on “Black Wall Street”.

The scene opens on a young black boy in a movie theater, watching an old film about a black lawman (the movie is fictional but the subject is real: Bass Reeves, the first black U.S. marshal west of the Mississippi, whose incredible life story is getting its own biopic). But he and his young parents are driven into the streets as violence descends on his neighborhood and the camera follows his horrific escape as gunfire, firebombs and rampaging mobs swirl around him in a chaotic tumble. It’s an excellent piece of filmmaking (courtesy director Nicole Kassell) and the terror it depicts really happened.

In 1921, a 19-year-old black man named Dick Rowland was accused of raping a 17-year-old white girl. Records of a police investigation into the accusation are scarce, but historians generally believe the accusation to be the subject of rumors among white people — the girl herself did not press charges and may not have even accused Rowland herself.

Nevertheless, Rowland was taken into custody at a local courthouse, where an angry mob of white people convened and spread rumors of a planed lynching. When several black men heard this rumor, they arrived at the courthouse armed, and ready to defend Rowland against the mob. A fight broke out that left 12 people dead.

This sparked a much bigger mob of white people over Memorial Day weekend, with thousands of white men including police officers and members of the Ku Klux Klan rampaging through Greenwood, an affluent black neighborhood in Tulsa sometimes known as “Black Wall Street” all night and into the next day, shooting and looting. Airplanes were called in to fire on black people from the skies and firebomb black-owned businesses and homes in the neighborhood. Martial law was declared.

Ryan Coogler Is Developing a Wakanda Series for Disney Plus

An initial report estimated that 36 black people had died during the riot, and the event was largely and intentionally omitted from history. But in 1996, the state authorized the Oklahoma Commission to Study the Tulsa Race Massacre to write an independent report to investigate the real history of Tulsa. They found that the riots left between 100 and 300 black people dead and 10,000 black people homeless. Adjusting for inflation, the Commission estimates roughly $32 million in damage.

In an interview, writer Lindelof credited Ta-Nehisi Coates’ famed essay The Case for Reparations for teaching him about the event. “That was the first time that I heard about Black Wall Street and what happened in Tulsa in ’21,” he said. “And was sort of ashamed and confused, and embarrassed that I had never heard about it before.” And now, thanks to The Watchmen, others are hearing about it too.

The original Watchmen book, written by Alan Moore and drawn by Dave Gibbons, is an intensely political work on superheroes, steeped in Reaganism and Cold War thinking. This new television iteration seems to have politics on the brain too, although Robert Redford is President in this alternate-yet-eerily-familiar universe and instead of focusing on Russia and the Cold War, Lindelof seems to be more interested in exploring race and police violence in the U.S. Based on the first episode, he’s off to an intriguing start.