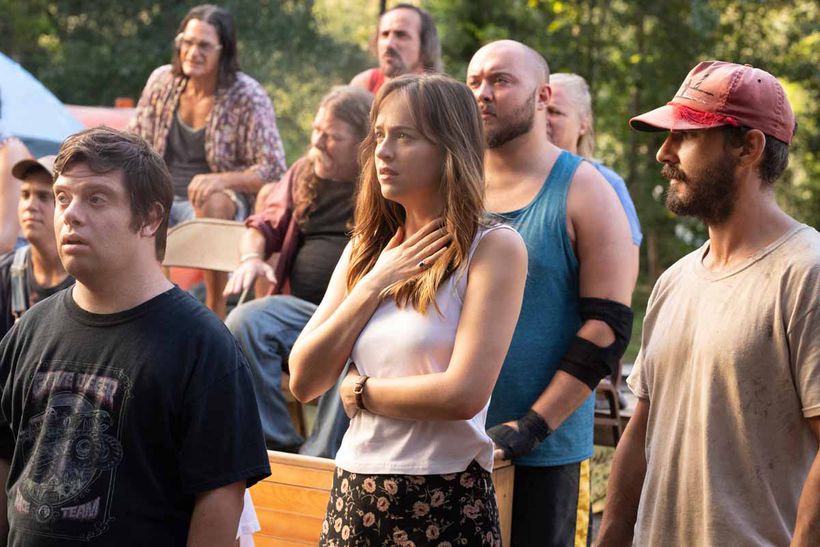 In the new film The Peanut Butter Falcon, Shia LaBeouf joins Dakota Johnson and newcomer Zack Gottsagen for a Mark Twain-style adventure. Along the way, they not only become closer to each other—they also learn a lot about themselves.

During production, LeBeouf explained to Esquire how much of an impact working with Gottsagen had on him.

From the 2018 Esquire piece: “He says their conversation continued on set: ‘We were getting ready to do a scene and Zack said, ‘Do you believe in God?’ And I thought, No f****** way are you about to explain God to me, Zack.’ LaBeouf tries to keep it together. His voice jumps an octave. ‘Zack said, ‘Even if He’s not real, what does it hurt?’”

LaBeouf later says, “I don’t believe in God” but suggests that the conversation did possibly change the way he thinks about God: “But did I see God? Did I hear God? Through Zack, yeah. He met me with love, and at the time, love was truth, and he didn’t pull punches. And I’m grateful, not even on some cheeseball s*** trying to sell a movie. In real life. That motherf***** is magical.”

We recently spoke with the writer-director duo behind the film, Tyler Nilson and Michael Schwartz, about working with Gottsagen, and going from making short, adventure-themed travel movies to a feature film with Hollywood A-listers.

How do you guys go from being friends who are living the adventure life to having a movie with Dakota Johnson and Shia LeBeouf?

Tyler: I think Mike and I just really love to make stuff. It’s something that we love to do, and it’s one of those things where when you get into this industry, you just kind of gravitate towards certain people … We had made a 10-minute short film that we had shot on the Outer Banks and that was like received really well.

So it was one of those things where we had made a short film, a 10-minute film, and we had followed the structure of a longform narrative, but we tried to do it in 10 minutes. You can still see it online. It’s on YouTube. It’s called “The Moped Diaries.” So we had studied that rhythm of storytelling but just did it really fast.

We were ready to step into something a little bigger, and it was combined with a perfect storm. We had seen Zak getting a performance in a short film that we were working on that was phenomenal. Then one night we were all talking and Zack was like, “I want to be a movie star,” and Mike and I were like, “I don’t know how you’re going to get that to happen, because I’ve never seen a film starring someone with Down syndrome. Even though I love you and I think you’re a wonderful actor and a phenomenal talent, I don’t know any films that do that.” And then Zack was like, “Let’s just do it together.”

Mike and I were ready to dive into a narrative space that was longer and just started working on writing it. We went to the library and got a bunch of books and really studied longform narrative and dove into how to tell a story that long at that length.

Tell me a little bit about casting Shia. I feel like he’s seen as this person with a free spirit.

Tyler: Shia has always been our number one choice. My favorite performance of his is he when was in a Sia music video where he was dancing in a large cage with another dancer. It was a phenomenal performance from him, and I was like, “Gosh, this guy. I think he really could just bring something special.”

We had producers that had worked with him on something before, and they floated him the script. He Facetimed us from an airport as he’s literally walking onto a plane to go to Finland to shut his phone off for six weeks. We had made a trailer to the film, and he just said, “Hey, I just watched your proof of concept. I haven’t even read it yet. I don’t care. Please let me do this with you guys. And Mike and I were like 100%, let’s do this. You’re our guy.”

I want to talk about Zack. In the film, he steals every scene he’s in. He’s a magnetic force that you’re just drawn to as a viewer. When the film was in production, Shia had done an interview and he talked about the profound effect that Zack had on him on a personal level. Tell me what it was like being around Zack on set every day.

Tyler: Grounding. It was really, really grounding. Zak stays very present, and to get to be around him, keeps you in the moment. At least, it did for me.

Shia said similar things, but yeah, it keeps me in the moment. I love him. He’s very present with me as a human in the world of cell phones and computers and disconnectedness. That’s something that I really loved.

You know, as a writer, you want to write for the greatest experience for your readers. Selfishly, Mike and I write for what we want to experience, and we wanted to be in a raft floating down a river with our friend Zak. That’s what we wrote. And I think, for audiences, it’s kind of cool they get to take that ride.

I felt really energized just watching him on screen.

Michael: At the end of every day, he’d get a bullhorn from our first AD, and be like, “Hey, I just want to give compliments today. James was really great with the schedule, and let’s all hear it for James. Today Tyler and Mike did a great job, but Michael was the real director today.” And some days Tyler was the real director.

Then he’d be like, “Let’s all come in for a group hug, and then we’d have eighty to one hundred people all doing a giant group hug around Zack, loving each other. Because you don’t say no when Zak says we’re doing a group hug, man. You just don’t do that.

Shia and Dakota both came up to me afterward, at the end of filming, and said, “Just so you know, it’s not always like this. Sets aren’t always like this.” It was cool because I think we cultivate that energy and Zack really brought that to set.