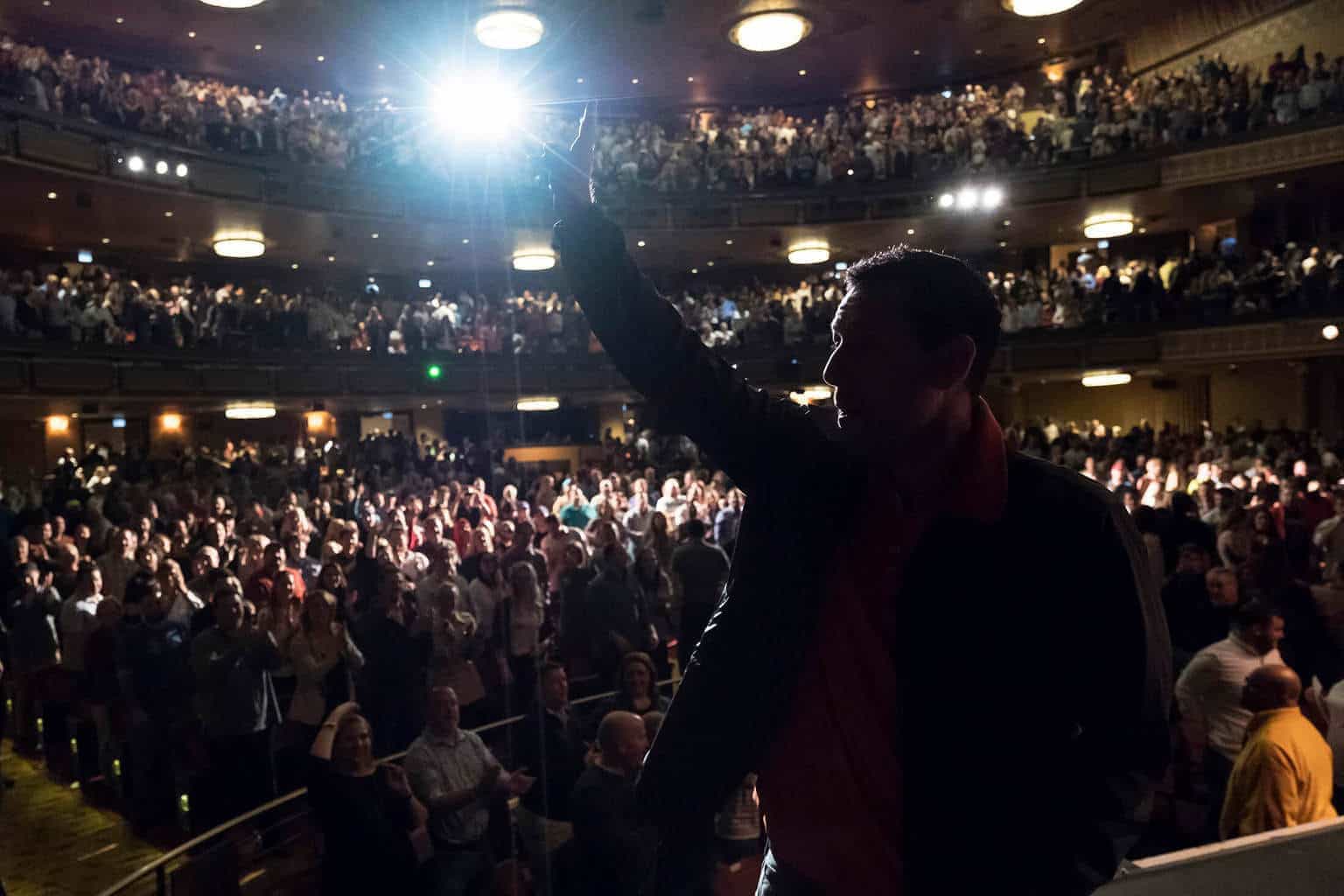 The jokes used to write themselves if you were an Adam Sandler critic. Here’s three off the top:

We could go on, but Adam Sandler is well aware at this point of his status as a joke among joke-tellers. He’s a punchline and a punching bag. So that makes the title of his new Netflix special, 100% Fresh, the first zinger of the show (it’s a reference to the unkind Rotten Tomatoes meter slapped on each of his movies). The second zinger is that—read these words loud and clear—100% Fresh is one of the best standup specials of the year.

The thing is, Sandler didn’t reinvent himself to achieve his long-lost acclaim. This is the Adam Sandler you grew up with on SNL and in the early days of Happy Madison, when he was doing movies like The Wedding Singer and Happy Gilmore and Big Daddy. Most of 100% Fresh is Sandler singing goofy songs and dishing quips about his wife and children (“My kids don’t know I’m here. They think I went downstairs for an apple”).

There’s a lot we can break down in terms of why the special works so well—Sandler leans into his washed-up dad vibe to tremendous effect, and there’s something strangely effusive about the way he cracks himself up throughout the hour—but the special’s best moment, its ending, is really the thing that will stay with you when it’s over. It’s one of the few moments Sandler doesn’t go for the joke. It’s funny, still, but it’s more sensitive and endearing than wisecracking.

After a tribute to Chris Farley (good luck not trying to keep it together during that song, yeesh), Sandler closes his show with a song for his wife. It’s really sweet and has some nice little jokes (“You stole me, you hold me, look the other way when I dress like a pig…I’ve got everything I want, growing old with you.”)

The “growing old with you” refrain is lovely, but during the final chorus, Sandler changes it up: “And this goes for everyone here tonight. Thanks for growing old with…”

Cue montage. Sandler with his family growing up. His mom and dad next to him on the set of Waterboy. Quick snippets from Wedding Singer and SNL and Happy Gilmore. Don’t Mess With the Zohan. Funny People. Grown Ups. Photos of him and his wife together. A video from their wedding day. Shots of their kids goofing around and laughing and playing guitar (like Dad!). The whole family onstage, waving to the crowd. Sandler walking off a dark set.

Back to him with the microphone, and we’re in the song again: “…me.”

It’s a thank you and a hat tip and an admission a love letter and it takes your memory across decades and your emotions through the screen. You’d never think this would be said about any Adam Sandler thing, but it’s so, so beautiful.

The best thing about 100% Fresh is that it’s made it okay to like Adam Sandler again. Perhaps that’s a bit trite, but popular culture has an unfortunate tendency of generating Default Smart Opinions that usually center on negativity (“Nickelback sucks,” “Adam Sandler’s washed,” “SNL isn’t good anymore”). If you find yourself on the wrong side of a Default Smart Opinion, you become locked into a cultural margin where the innocence of enjoying something for enjoyment’s sake becomes something that makes you feel guilty or wrong. Being an Adam Sandler fan, for years, pushed me into those margins, but 100% Fresh and its smart, surprising, self-aware ending is strong enough to eliminate those margins all together.

The savviness of the song, then, is how it not only speaks to Sandler diehards and Sandler critics alike (“thanks for sticking around” in one case, “thanks for coming back” in another), but in how it unifies them under Sandler’s career. The montage isn’t a highlight reel; it’s a complete timeline. It shows the good and the bad, the SNL heyday to the Jack and Jill nadir. That fairness casts the widest spectrum possible for how people can connect to the song, and that means anyone can find their way back to a place where sitting and laughing with Adam Sandler feels good again.

This year we’ve been obsessed with the notion of cultural figures redeeming themselves. Of course, most of those conversations spawn from crimes much worse than Zohan, but 100% Fresh might be a compelling case study of how redemption can work for any public figure: It’s both an offering and a concession.

With this closing, Sandler puts a funny form of grace forward. He doesn’t beg for positive reviews or bag on those who raked him in the past. He just says thank you. It makes you want to be gracious in return, and I suppose that’s how you come to write (and read) articles like this one. Adam Sandler doesn’t clap back here; he just opens his arms. That’s astounding, and this year, it certainly feels fresh.

Why Would Netflix Cancel ‘Daredevil,’ and Where Does Marvel TV Go From Here?