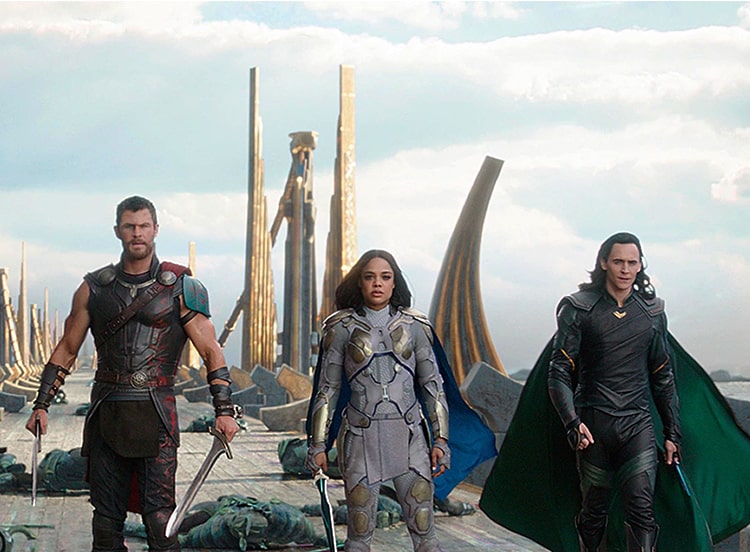 The latest Thor movie wears its silliness so proudly it’s easy to miss how insightful it is.

Taika Waititi is a genius at crafting characters as lovable as they are doltish, and he has brought his very New Zealandish comic sensibilities to a Marvel hero desperately in need of a lighter touch. Because of this it’s easy to talk about how funny Thor: Ragnarok is, or how gorgeous and bizarre Waititi’s visual sensibility is or how very “Jeff Goldblum” Jeff Goldblum is. But don’t sleep on the not-so-subtle, culturally timely message about why people have to change, or they risk becoming villains.

Behind Ragnarok‘s improvisational, eccentric vibe is a message about the walls that provide the boundaries of our identity and how they have to be knocked down and rebuilt over time lest they become prisons.

Every villainous character in Ragnarok defines themselves by the past. Hela is the rightful heir of Asgard who, with her father Odin, violently took control of the nine realms. Odin, however, is worn out by war, and decides it is time for peace. Hela refuses, escalates her violence and is banished. When she returns years later she is the same, having learned nothing, wanting to rule everything.

Loki, for all his powers and charisma, is still a petulant child who (rightly) believes he was lied to about his heritage and (wrongly) believes he was unloved by his father. The first Avengers made it clear that Loki’s need to rule is really a need to be adored. He’s trying to mend the wounds of his past through tyranny (or a poorly acted community theater commemoration), but each attempt is less effective. In Avengers, Loki nearly took over the Earth. In Ragnarok, he can’t even successfully trick Thor, which has always been pretty low-hanging fruit.

And then there’s the Grandmaster. While we don’t learn much about him, we know he landed on the strange planet of Sakaar (which, fittingly, seems to be stuck in an unchanging purgatorial state) and built a kingdom of misfit toys he could rule over. There’s an implied sense that the Grandmaster, so wonderfully “Goldblumian” in personality, was an outcast in his former life who now glories in the fake adulation of his kingdom. He has literally created a world where nothing can change, no one can leave and he can be worshipped and entertained.

The Grandmaster is what Loki would become if left to his own devices.

In contrast, all the heroes of Ragnarok grapple with their pasts, let go of an outdated way of seeing the world and grow. Odin moves from a man of war to a man of peace. Valkyrie moves from alcoholism to a rediscovered heroism. Hulk stops living in anger from being rejected by humanity, remembers he is loved (by Black Widow specifically), and turns back into Bruce Banner. And then there’s Thor …

It’s a minor quibble about an otherwise great movie, but Ragnarok is so entrancing in its humor that we don’t feel the pathos of Thor losing everything he holds dear. Thor loses his hammer, his lineage (he’s no longer the firstborn), his father, his hair, his home planet and has his entire paradigm of Asgard and Odin as bringers of peace literally shattered by Hela when she breaks down the hagiographic mural of Asgard’s past, exposing the truth.

Early in the movie Dr. Strange tells Thor, “Destiny has dire plans for you, my friend.” Thor responds, “[He] has dire plans for destiny.” But by the end of the movie, Thor realizes that’s not how it works. As Sam Cooke sings, “A change is gonna come,” and our only choice is how we respond to it. In case we haven’t gotten it yet, Ragnarok hammers home its point when Thor tells Loki “Life is about growth and change. But you, my dear god of mischief brother, just want to stay the same.”

It’s a powerful message, especially in a time where social media echo chambers and specialized news networks tell us that who we have always been and what we’ve always thought, is indeed correct, and that other people are trying to take it away from us.

We’re told we need to “Make America (Asgard?) Great Again, a fundamentally backward-looking, change-resistant slogan that suggests greatness is found through regression. Some religious leaders join in, telling us that the Gospel of Jesus is found by recapturing an American past that—much like in Asgard’s case—was only good for a select few … and that’s no gospel at all.

Oddly Ragnarok shares themes with C.S. Lewis’s phenomenal The Great Divorce. There Lewis suggests that hell is what is ultimately formed by anyone who holds on to an idol too long, resisting the terrifying and exhilarating forward momentum of devotion to God, and in doing so, creating their own little tyrannical version of Sakaar.

Hell, in other words, is of our own making. Thor: Ragnarok suggests that doesn’t have to be the case.

How to Adult Through the Holidays