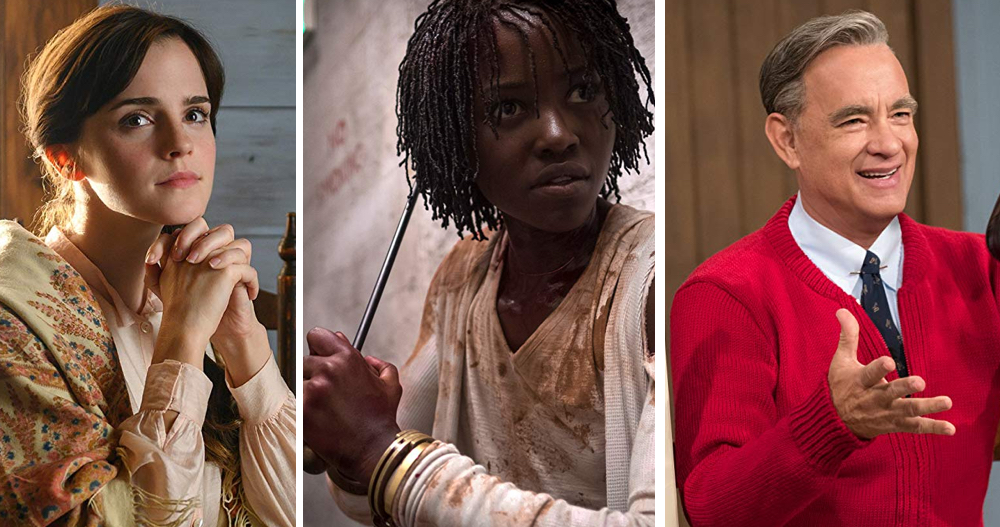 Some years are better than others when it comes to film, but 2019 was particularly special. From big, noisy entertainment like Avengers: Endgame to quiet, more intimate dramas like The Farewell, every filmmaker just seemed a little more on their game this year. Quentin Tarantino’s Once Upon a Time …in Hollywood was smarter and gentler than the usual Tarantino fare, while Robert Eggers’ The Lighthouse was way weirder than studios usually let movies get.

All those are good things for the movie industry, and we haven’t even gotten to any of our absolute favorite movies of the year yet.

As usual, RELEVANT tries to employ a unique metric when it comes to evaluating movies. Technical excellence and exceptional artistry matter a lot of us here, but we also try to find movies that speak to our audience.

Rian Johnson’s giddy whodunnit didn’t have to be more than an old-fashioned mystery with some delicious performances, but it is more.

It’s a keen exploration into the quiet power of good people in a bad world, a look at the way evil can sink its roots into families and an enduring testament to the ways compassion and kindness can overcome greed and malice.

It would be difficult for Jordan Peele to top his astonishing debut Get Out but Us just about does it, via a far messier movie about class, privilege and internal duality, all while delivering his trademark thrills, chills and twin titanic performances from Lupita Nyong’o.

While The Two Popes sounds like a stuffy drama about the papal transition, it’s actually a warm, engaging and surprisingly funny buddy comedy about a very serious subject.

Anthony Hopkins’ Pope Benedict struggles to understand the appeal of Jonathan Pryce’s Pope Francis and disagrees with him mightily, but still recognizes that the man’s time has come. In this intimate portrayal of two men learning to trust each other, we see the beginnings of the evolution of the world’s oldest and largest institution.

Shia LaBeouf and Zach Gottsagen make for one of the year’s best cinematic pairings as two runaways — the former from the law, the latter from a residential nursing home — bonding over a dream of fame and freedom. This movie brims with sweetness, exploring a tender friendship that blossoms from the unlikeliest of ingredients.

Adam Driver and Scarlett Johansson both had plenty of opportunities to shine in 2019, but neither was ever better than in Noah Baumbach’s aching, devastating story of the end of a marriage, and the impossible task of pulling a life back into two separate pieces.

Terrence Malick’s return to form tells the story of a conscientious objector during World War II, who strives to live according to his personal moral code even as everything he knows plummets into chaos. An achingly gorgeous portrayal of a life of quiet dignity; a story that will leave no person — and certainly no Christian — unchallenged.

Martin Scorsese has made movies like this all his life and yet, he’s never made a movie like this.

In his hands, the story of The Irishman becomes more than just a mob story. It becomes a meditation on Scorsese’s own legacy, the characters he made famous, and the emptiness of a life lived in service of violence.

The Irishman is just a marvelous evolution of its famed directors’ own obsessions, but a truly inspiring example of an artist who has refused to stop pushing himself.

3. A Beautiful Day in the Neighborhood

It would have been so easy to make a Mister Rogers movie that follows all the usual beats of a standard biopic about any beloved individual, but Marielle Heller bet big on an innovative format — instead telling the true story of a journalist assigned to cover Fred Rogers — that makes for a far greater impact, a more memorable experience and a more profound meditation on what it means to forgive.

Come for a winning performance from Tom Hanks but stay for the sort of moral intelligence Rogers spent his life dolling out.

Greta Gerwig cements her place as one of her generation’s best filmmakers with this spectacular adaptation of Louisa May Alcott’s classic novel, embracing the book’s complexities, nuances and contradictions to create something that feels miraculously alive, vital and tender — pleasing old fans, welcoming new ones and all told, celebrating the rich beauty of unremarkable lives lived well.

The four central women — Meg (Emma Watson), Jo (Saoirse Ronan), Amy (Florence Pugh) and Beth (Eliza Scanlen) — all shine, and the modern resonance of their characterizations showcase just how ahead of her time Alcott was, making for a film both timely and timeless.

There is just no describing Bong Joon-ho’s movie. No explanation of the tone or genre could do it justice. Almost any description of the plot feels bound to give too much away. Maybe you shouldn’t even be reading this. But suffice to say, in a year with lots of movies preoccupied with classism, no movie had a more nuanced take on the subject, and no movie was executed with more excellence.

From the plot to the performances to the cinematography to the exquisite set design, this was a rare case of a movie banging on every conceivable cylinder. An instant masterpiece.