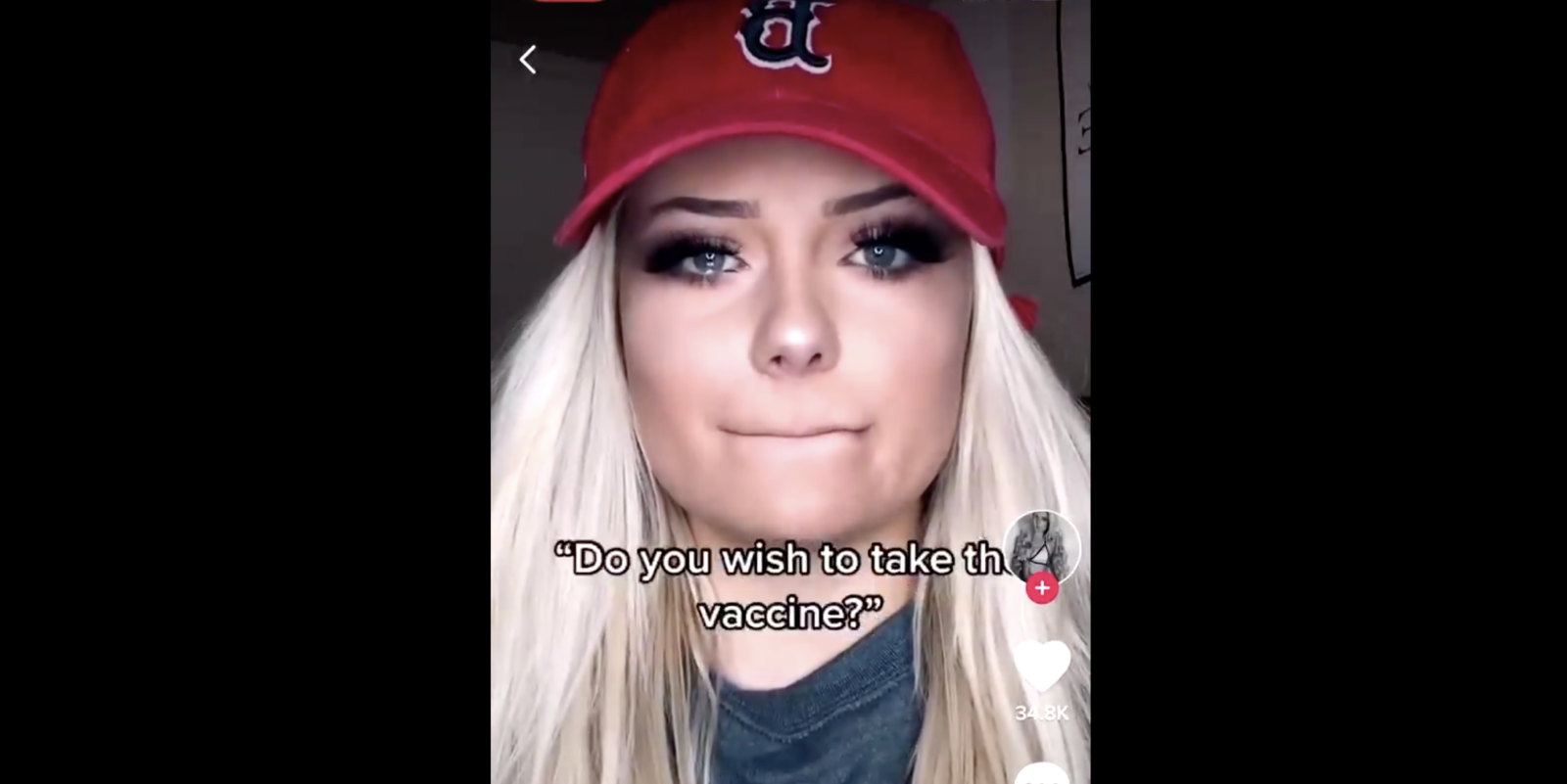 TikTok memes run the gamut from bizarre to hilarious to even genuinely thoughtful or daringly creative. But like any social media platform, great power comes with great responsibility and not every user is quite up to the task.

Take user @itstaylorrouseau, a TikTok user with almost 560,000 followers. Most of her TikToks are the usual mix of little skits, dances, makeup tips and meme variations. But one video picked up a lot of attention for swerving into end times prophecy, in which a vaccine is the mark of the beast, @itstaylorrouseau is martyred for refusing to take it and God rewards her for her anti-vaxx faithfulness in Heaven with a “well done, good and faithful servant.”

#pov you’re required to take the mark of the beast (vaccine)or you die, but you know what Gods word says so you deny it🤍 #fyp #foryou #Affirmations

OK, that’s a little strange but it’s a one-off, right? Wrong. A second TikToker who goes by @morgealina_ posted more or less the exact same video. One woman consents to a vaccine (which is also a microchip?) and lives. The other refuses and is apparently beaten to death before going to Heaven and receiving a “we’ll done.”

Two users doesn’t exactly constitute a “thing” online, but it caused enough of a stir that a few parodies ensued.

Or this one from Jamine Don, which puts an appealing Spider-Man spin on the whole thing.

pov: you’re required to take the mark of the beast or you die, but Alfred Molina as Doc Ock is the best villain of our times pic.twitter.com/5ijJArkRHs

The persecution narrative isn’t exactly new. Christians of a certain age will probably remember how the Columbine shootings inspired a way of possibly apocryphal tales about how some of the victims were modern day martyrs, killed in school shootings specifically because they were Christians. Of course, this mentality predates even those days with books like Left Behind and the A Thief in the Night movies, which popularized a certain theological interpretation of the Book of Revelation known as “pre-tribulational premillenialism” and gave us a end times glossary made up of terms like “rapture” and “mark of the beast.”

There’s nothing wrong about holding to that view of eschatology, but there is a problem when such doctrine starts glomming on to views like the anti-vaccine movement, creating an unholy mess. It might sound brave to refuse a hypothetical government microchip on your arm but the parable sort of loses its power when your whole Revelation fanfic is filmed on a device that already stores all your personal information before selling it off to the highest bidder.

The tricky thing about the prophesies in Revelation is that their weirdness lends them a wide range of possible interpretations. The Mark of the Beast has been cast as everything from the internet to barcodes to pretty much every U.S. President of the last thirty years, a few of the First Ladies and any number of world leaders. There’s nothing wrong with keeping your eyes open for dangers. Christians should be alert. But there’s a difference between being watchful and just using a persecution complex to cosplay as a martyr.