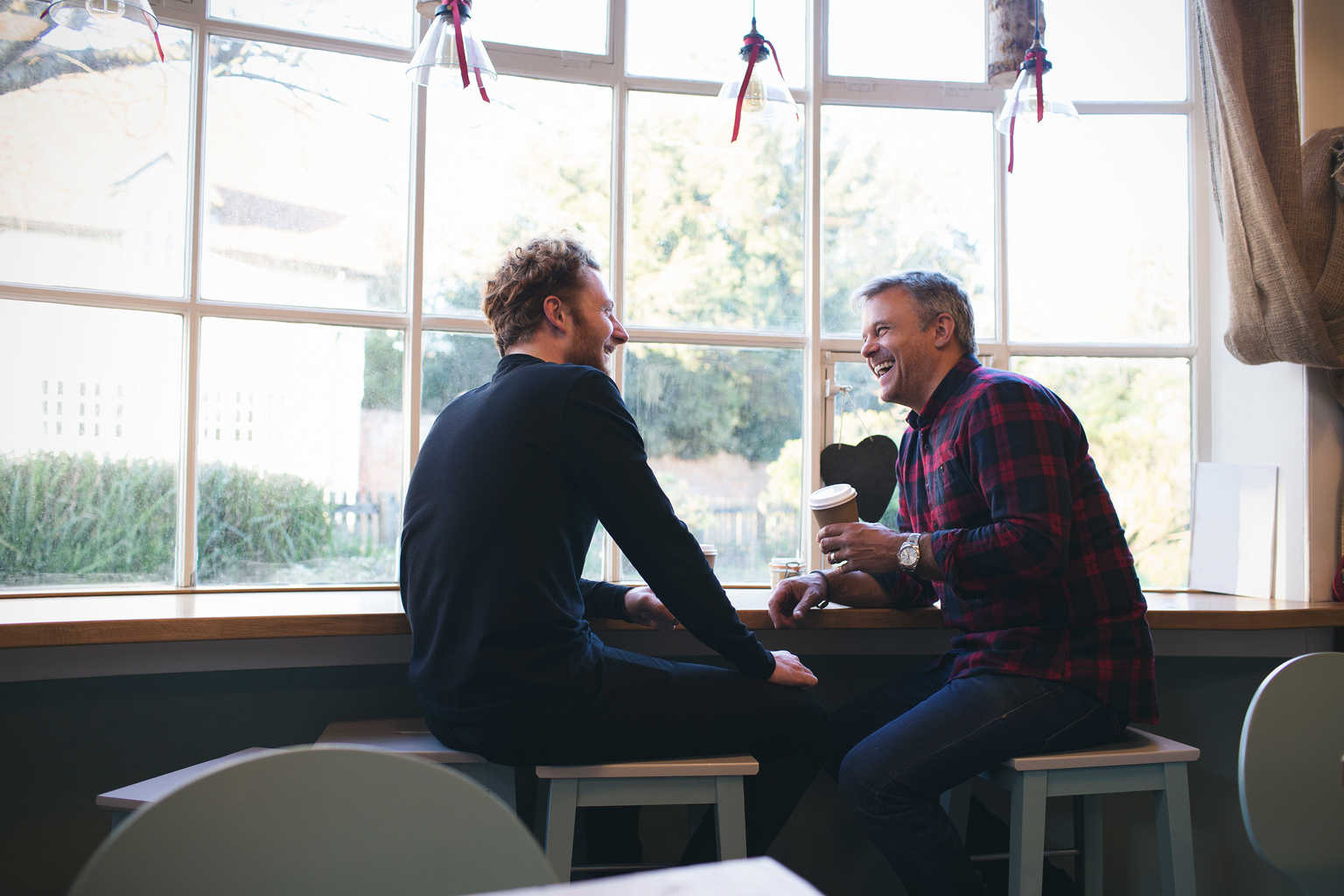 Hinge podcast is a conversation between pastor Drew Sokol and atheist philosopher Cory Markum about doubt, identity and the search for the real Jesus. The podcast debuted at No. 1 on the iTunes Religion and Spirituality podcast charts.

RELEVANT talked with Drew and Cory about their experiences working on the project and the importance of fostering productive conversations among people who disagree.

RELEVANT: Drew, in the first episode of Hinge, you talk about what you describe as a faith crisis. Could you just tell us a little about that? What were you experiencing and what was that like?

Drew: I was only about a year and a half into being a pastor and I’d been exposed to a lot of hard things just in my time in L.A.

At the same time I think I just passively let myself fall into a season of prayerlessness. There were these heavy things that were happening, but I also wasn’t processing them the way that I needed to.

And you know, I think inevitably, especially when you’re in church leadership, you preach a lot about the power of the Holy Spirit and how it can change people’s lives. And you look at the call of Jesus where He says, if anyone would come after Me let him pick up his cross and follow Me. And then you see so many people unwilling to really strive for it. And you see so much hypocrisy, we all have varying degrees [of that], and I think a lot of that just kind of snowballed into this feeling that, over time, I think if I would have been willing to be more self-aware I could have seen coming, but I think out of immaturity, I started to have these doubts and frustrations and sorrows starting to build up. And I was just pushing it down subconsciously.

Then in the fall of 2013, I was going to preach this sermon on truth—an incredibly appropriate topic, because it’s literally while I was talking about truth that I was like, “I don’t think I buy this anymore.” I’m not typically the most emotional guy, but it was a very dramatic day in the sense that like, I was in tears frequently, I was throwing up in different points throughout the day.

But since then [and regaining my faith], it’s been a lot fuller and richer, I guess of a faith experience than certainly what I was experiencing before.

Corey, if I understand correctly, you have not always been an atheist, right?

Corey: Right, yeah. I grew up in, I would say, a fairly typical American home, in that it [existed in] the presumption of Christianity. My mom and dad were certainly not very theologically well-read. But they were Christian, we identified as Christians and I certainly was taught the basic Christian values, if you will, growing up. And I believed.

It’s funny, because when I think about this, I don’t remember my parents ever like telling me, there’s a God. It was just more like, I grew up with that assumption, that there’s a God. We went to church sometimes, probably not as much as my mom would have liked us to have gone. And over a course of a few years in my early teens, I started to have doubts and I started to question these things. And again, it’s not as though I had approached Christianity from an evidence-based perspective, like I was investigating all of this and that’s what made me a Christian.

I don’t want to give the impression that I fought my way into Christianity and then fought my way out of it or something like that. It’s way more organic, way more complicated. Without a doubt, initially, I probably was just upset with God. I was angry about something that was happening. And that anger and frustration bled over and combined with my inability to find good answers to all of these questions. So it took time.

There’s this idea that you come to atheism purely through an intellectual process of thinking through all the issues and questions analytically. But that’s clearly not true. Atheists are humans too. There’s all sorts of emotions and life experiences that are all caught up in this crazy thing that we call life.

[At one point] I went into like a militant atheist phase. I’m kind of embarrassed about that now, cause all I wanted to do is argue and prove other people wrong—a very Dawkins and Sam Harris kind of guy. And then I think over time it kind of matured and evolved into something else. I’m more interested in having productive conversations. Understanding the other side and making sure they understand me as well, and then, who knows what will happen. Hopefully we can at least make some progress.

The idea that a Christian and an atheist can be close friends can be hard for some people or at least surprising for some people. How do you navigate that dynamic where both of you are able to really own and express your beliefs and be your full selves, so that Corey doesn’t have to pretend to believe in God and Drew doesn’t have to pretend to be an atheist?

Drew: I think that at the end of the day, Corey’s viewpoints are definitely understandable to me. We’ve definitely wrestled with things to the degree that I mostly have an idea of what kind of thoughts are gonna come into Corey’s head after I say something specific, and I think it’s the same thing the other way around, too.

I think there’s always a part of you that wants to convince the other person. [But] I think entering into conversation [that says] either way, I can understand them a lot better and I can understand why people view something a little differently than the way I do. I think that’s enough of a positive to shoot for.

I guess a more important point to make, usually people enter these conversations with fear: [that] they’ll be proven wrong or someone will say something that they can’t respond to.

I think, if somehow Christianity were demonstrated to not be true, I really do believe that I would walk away from it. And I’m OK with that. So I’m able to enter into these conversations without as much fear. Because I’ve kind of done that processing myself to know that like, it’s OK if I don’t have a response to everything that someone says. That’s OK.

Corey: Two things: I think Drew and I both value truth. We hold it to a very high regard. So, even if we get aggravated or upset sometimes, at the end of the day—after all of the brain chemicals subside—we’re constantly forced to check ourselves and to remind ourselves that “OK, I disagree with him but he’s coming from a place of honesty and that’s genuinely and sincerely what he thinks.” And it’s hard to stay upset or let there be issues if you have that basic understanding.

I also think humility about what we know and what we don’t know [is important] and being comfortable with that. I think a lot of people aren’t comfortable with being wrong. And it’s much easier when you’re talking to other people to kind of assert the issue and not be too open and honest about it. But it’s not like that for Drew and I.

And I should also say, Drew and I actually agree on a lot, that’s one of the main things I’ve gotten out of this. Although philosophically and theologically we’re so far apart, at the same time we constantly find ourselves agreeing about things, politically or even when we’re doing the show, there are issues where we’re like yeah, I get you on that. So that’s a really big part of it, too. He’s really just a likable guy that’s the big thing.

You two have had productive conversations from completely different perspectives. We need more of that in these polarizing times. How can other people do have better conversations with people they disagree with?

Corey: Yeah. I think the biggest thing between a debate and a conversation is, when you’re having a conversation you want to understand or you’re trying to convey your understanding of something to the other person. But in a debate that’s not what’s going on. A debate is more about earning points in the eyes of the people listening or watching, or even just to yourself. What we’re trying to do is have a conversation: This desire to understand the other and to make sure that they have a proper understanding and view from where you’re coming. And that to me is different and that’s why what we’re doing is different. Albeit, we do have debate aspects to it.

Drew: Both Corey and I expect that we’re gonna keep our own views, but we’ve really been intentional to try and say “I could be wrong and I want to explore the potential that I’m wrong.” Both of us are willing to say that. I would rather be wrong and get closer to the truth than to just stay stubbornly rooted to my own views. And I think one great quality Corey has too is curiosity. We both value curiosity and I think if you feel more of a curiosity about how the other person came to whatever position they’re at than you have a desire for competition and a desire to win, then you’ve already won most of the battle.

Can You Tell the Difference Between Young Natalie Portman and Millie Bobby Brown?