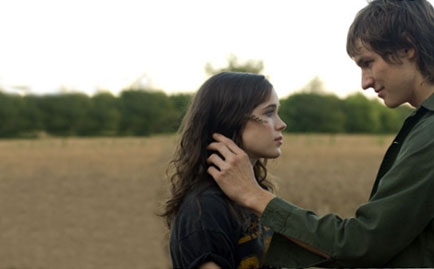 It’s not often that Hollywood pays attention to average, small-town America in a way that depicts those characters’ lives with respect. It seems even rarer that Hollywood studios release films that depict intact, nuclear families in a positive way (plus the main character proudly wears a T-shirt bearing the image of ’80s Christian metal band Stryper throughout much of the film) and it’s a downright miracle when the studios dare to show not only the swept-away, romantic side of teen love, but the heartbreaking emotional consequences as well.

Well, one movie is here to change all that at theaters nationwide, starting today. Whip It stars Ellen Page in her first leading role since her Oscar-nominated breakout in Juno nearly two years ago, and its rich, multi-layered depiction of another young girl’s coming-of-age not only rivals that film’s classic qualities but possibly even surpasses them due to its addition of slam-bang roller-derby action to the Juno blend of humor and emotion.

Whip It tells the story of a sweet but aimless small-town Texas girl named Bliss who finds purpose in her natural knack for speed amid the rough-and-tumble world of roller derby, and how her new life impacts her relationships with both her family and her first boyfriend. The film also draws attention to the directorial debut of Drew Barrymore, who does a sterling job with every aspect of the film’s razor-sharp storytelling.

Speaking on behalf of the film at the Andaz hipster hotel on Hollywood’s Sunset Strip, Barrymore and Page led a pack of the film’s other actors and its writer, Shauna Cross, in a series of interviews explaining how this very special film came about and the conscious decisions that went into its heartfelt embrace of family and traditional values.

It would especially seem surprising that Barrymore would find this film’s story the one she was drawn to for having the extremely personal decision of how to launch what could very well become a thriving second career as a director. Having famously made her debut at age 7 in the 1982 classic E.T., she was quickly caught up in the darkest sides of the Hollywood party scene because her absentee father was mentally ill and often living on the streets, while her mom was a party fixture who helped hook Drew on alcohol and drugs so badly that she had to go through rehab at age 14.

"Every single aspect of this film can be traced back to me," says Barrymore, who was fighting a cold due to the nonstop weeks of travel associated with promoting the film worldwide. "I had a difficult time navigating my relationship with my mother, and we’ve all had that rite of passage of choosing the boy who’s interesting and stimulating and inspirational but may not be the one that you can count on at the end of the day.

"I love my friends, finding my tribe, action and being able to do what the boys can do, yet wanting to come together and bond in sisterhood at the end of the day. Both in growing up and in choosing what to direct, I didn’t want to be put in the sort of box of what you can be, do and look like. I thought derby was the perfect metaphor for that and finding a way to make me incredibly happy. That’s why it was incredibly personal to make this film—because it was personal."

Whip It wouldn’t exist, however, if it weren’t for the writing style of Shauna Cross, whose young adult novel Derby Girl served as the basis for her own screenplay for the film. Allowing a first-time screenwriter to adapt his or her own work is an extremely rare occurrence in Hollywood, and shows Barrymore’s commendable sense of respect for the integrity of writers, who are often tossed aside in favor of re-writers.

Growing up in a tiny town just outside Austin, Texas—just like Bliss—Cross often dreamed of life in the bigger city, but only became a roller derby participant after moving to Los Angeles as an adult. She made a point early in her interview that Whip It is such a universal tale that it should not just be seen as a female-empowerment film, but "just an empowerment movie, period!"

"We made a conscious decision to portray parents in a realistic and respectful way," Cross says. "This is like Breaking Away [a 1979 Best Picture nominee that is an absolute must-see classic] meets [gritty 1975 hockey comedy] Slapshot-with-a-girl with a little bit of [1980 coming-of-age film] Little Darlings thrown in.

"It’s very easy with pageant moms like Bliss’ mom (wonderfully portrayed by Marcia Gay Harden), who really exist in Texas to get charactery and over the top," Cross

continues. "And so yes, you wanted to anchor that person and have a view and if it didn’t feel like a typical movie villain, it would be anchored by the reality and showing what real mothers and daughters go through. Even with Iron Maven’s character [Bliss’ main skating rival, played with rock and roll flair by Juliette Lewis], to reveal what she’s about and how that antagonism is revealed from the other side of her perspective and not just Bliss, we decided to let reality be the hook."

That sense of reality was what drew Page to get on-board and lure her before the cameras after taking a yearlong post-Oscar-whirlwind break. She trained at derby skating for three months—a full two months more than most of her co-stars—including a month-long derby "boot camp" that was her most intensive role preparation ever.

"The Oscar nomination [for Juno] was a gift," Page says. "To be able to work as an actor is such a gift, and then to be able to pick and choose what you want to do is incredible. I took a year off after Oscar, because I work with understanding and supportive [agents and managers] who want quality over quantity in my career. I’d been working so much in my life, so I went backpacking in Europe with my best friend.

"The roller derby aspect was incredibly enticing, but the relationships felt incredibly sincere," Page continues. "I wanted to explore a mother-daughter story we’d never seen before, and this felt really honest to me. They both had changes in life that moved them apart and they’re learning to come together again."

[SPOILER ALERT]: He and Page share an underwater make-out scene in a swimming pool that is tasteful yet intense and could very well join scenes like the pottery scene in Ghost as one of filmdom’s most unique love scenes. However, the film more than balances that glamorization of teen hormonal activity with a surprisingly stirring depiction of the heartbreak that comes when a seemingly perfect relationship goes awry. [END SPOILER.]

"That’s amazing. Both things can be amazing—that intimate relationship, and then it’s so true that it comes at a cost and I’m so happy the movie showed that as well," says Pigg, who also has a song on the film’s eclectic soundtrack. "There’s a light and a dark side to everything. That’s one thing I really liked about this movie—that nothing really gets wrapped up in a bow. At the end, even Marcia Gay Harden doesn’t fully come around. Bliss’ dad [played by Daniel Stern] comes to the rescue and she says this is gonna be hard for me to accept. It leaves it a little open-ended."

FlashForward: What Did You See?