New data analysis from the Institute for Family Studies confirms that divorce in the U.S. is continuing its long decline and has now hit a surprising milestone: it’s lowest rate in half a century. Last year, just 14.9 out of every thousand marriages ended in divorce in the U.S., according to American Community Survey data from the Census Bureau.

That means longer marriages too. In 2010, the median length of the American marriage was 19 years. In 2019, it had jumped almost a full year, to 19.8 years. And the trend is expected to continue through 2020, despite the pandemic. Despite an early rush of divorce proceedings in March when lockdown was initiated, research suggests that a majority of couples have actually gotten closer to each other over the last year. 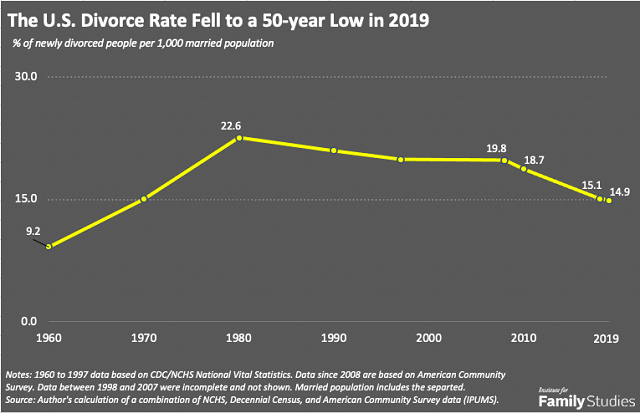 One possible contributer to this: the falling marriage rate overall, which has also hit a 50-year-low. Researchers call this “the marriage divide,” and it’s growing along economic lines. College-educated adults in financially stable situations are likely to get married but economic insecurity means working-class and poor Americans are growing less likely to get married. According to IFS, 64 percent of Americans in the top third of the economic bracket are likely to be in an intact marriage. That’s true of just 24 percent of Americans in the bottom third of the economic bracket.

So, it’s a little bit of good news, bad news here. On the one hand, fewer divorces means more stable households, which is good. On the other, the fact that a shaky economy is making marriage seem unrealistic for a growing populace does not seem like a problem likely to go away anytime soon.