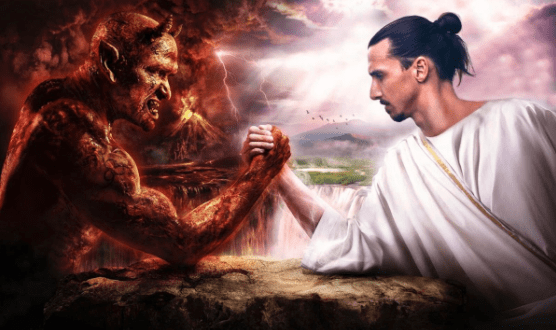 Zlatan Ibrahimovic has been one of the most exciting soccer players in the world over the course of his career. He calls himself “the lion” (Twitter bio: “Lions don’t compare themselves to humans”), he’s scored armfuls and footfuls (?) of goals, and he’s brought a ton of ESPN-ready highlights to the Champions League and Premier League in European football.

Oh, also, he’s in a constant Twitter war with the devil. Ibrahimovic announced his move to American soccer (he signed a two-year, $3 million deal to play for the L.A. Galaxy this week) with one of the most epic social-media announcements we’ve seen.

Great things also come to an end and it is time to move on after two fantastic seasons with Manchester United. Thank you to the club, the fans, the team, the coach, the staff and everybody who shared with me this part of my history. #foreverred pic.twitter.com/vo1Gs3SUHL

Incredible. Go Galaxy. Go Ibra. This is what spiritual warfare looks like on the soccer pitch, and now, we know whose side we’re on.