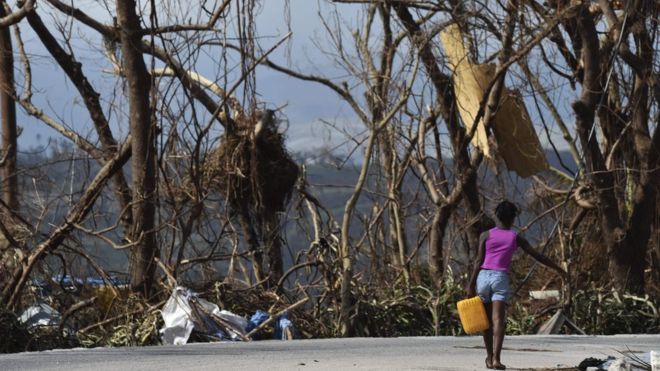 Haiti was the biggest victim of Hurricane Matthew with as many as 900 people killed by the Category 4 storm. The hurricane was the strongest natural catastrophe to hit the country in 10 years.

At least 350,000 people need assistance and 60,000 people are staying in temporary shelter. Haiti has been experiencing a cholera outbreak since U.N. peacekeepers brought the disease to the country and the lack of clean water has increased the risk with several patients sick with cholera being brought into a hospital in Port-a-Piment.

In the U.S., 22 fatalities were reported, but relatively little damage has been reported except for cities in Northeast Florida and North Carolina which are still threatened by flooding.

In Haiti however, many towns are still without power, resources such as food, water and medical supplies are scarce.

“There is a lot of suffering, a lot of hardship; some of the communities have been almost totally destroyed by the strength of the wind. Therefore the shelters, public infrastructure including the schools [and] hospitals have been affected,” Enzo di Taranto, the Head of Office for Office for the Coordination of Human Affairs in Haiti, said in an interview with UN Radio.

Relief organizations are seeking support in their efforts to deliver aid and assistance to people affected.

WorldVision, Save the Children, Hope for Haiti and many other organizations (that you can view here) are collecting donations to help the victims in Haiti.

25 Lessons Everyone Should Learn By 25