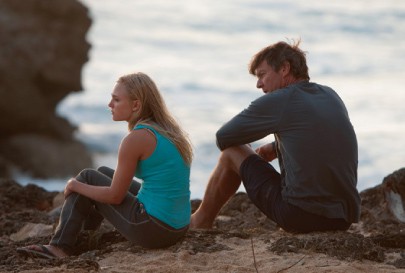 Dennis Quaid has proven to be one of Hollywood’s most durable stars, but he has also undergone personal challenges: In 2007, his then-week-old twins nearly died after a medication error. It was while sitting with them in 2009 that Quaid agreed to portray Tom Hamilton, the real-life father of world- champion surfer Bethany Hamilton, in the new film Soul Surfer. It’s a role Quaid says helped him believe in God again.

Hamilton made headlines in 2003 at the age of 13, when she lost an arm in a shark attack. Her doctors and family believed she would never surf again. But, relying on her faith and support from friends and family, Hamilton proved them wrong. She’s since reclaimed the female world surfing championship.

“I was watching the Today Show and an update on Bethany was on,” Quaid says. “I had a dim memory of her story, but to see her and what an inspiration she was, I [had] tears streaming down my face with my 2-year-olds next to me. Two days later they called and asked me to do it. It was a no-brainer.

“Of course I bring my own experiences as a father to this role. I really believe it was the prayers of people around the world that saved [my twins]. That was a real life-changing experience for me and brings me to this and what [the Hamiltons] went through.”

Quaid shares the screen with Helen Hunt as Bethany’s mom, Carrie Underwood in her film debut as Bethany’s youth min- ister and AnnaSophia Robb (Bridge to Terabithia) as Bethany.