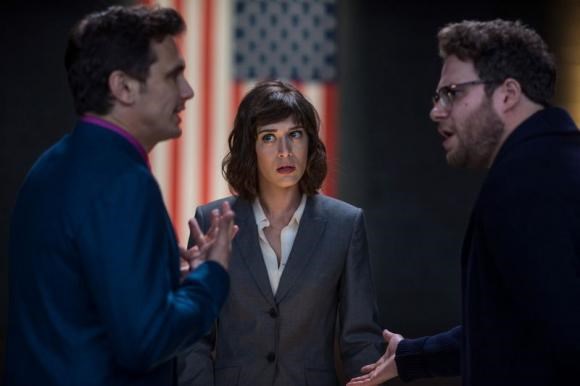 Up to this point, the Sony hacks have been, in turns, amusing, befuddling, offensive—but largely harmless (depending on who you ask). However, things just got a lot more serious. The hackers have threatened a 9/11-type attack on any theaters that screen The Interview—Seth Rogen and James Franco’s North Korea comedy that seems to have sparked the hack. The hackers have also promised a new “Christmas gift” of files titled “Michael Lynton” (Sony’s CEO), in addition to this warning:

We will clearly show it to you at the very time and places “The Interview” be shown, including the premiere, how bitter fate those who seek fun in terror should be doomed to.
Soon all the world will see what an awful movie Sony Pictures Entertainment has made.
The world will be full of fear.
Remember the 11th of September 2001.
We recommend you to keep yourself distant from the places at that time.
(If your house is nearby, you’d better leave.)
Whatever comes in the coming days is called by the greed of Sony Pictures Entertainment.
All the world will denounce the SONY.

Just who the Sony hackers are remains a mystery, but when issuing threats like this, you can bet the government is paying much closer attention …