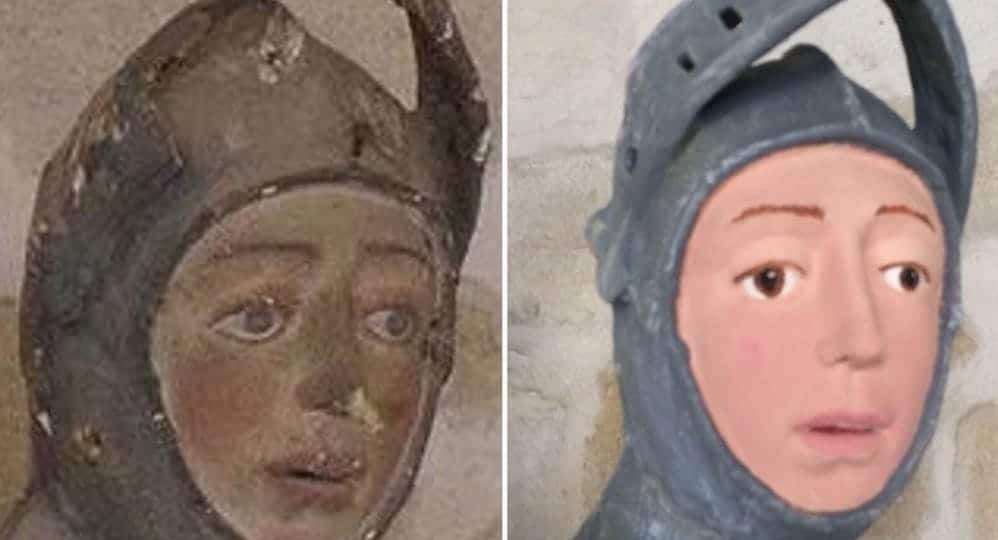 A church in Spain is facing some criticism after it unveiled a “restored” version of a famous 16th-century wooden sculpture depicting St. George.

Spain’s art conservation association (ACRE) released a statement bluntly saying, “We cannot tolerate more attacks on our cultural heritage. It shows a frightening lack of training of the kind required for this sort of job.”

The St George sculpture before… and after ?

Evidently, the church wasn’t even looking to have it restored, they just wanted it cleaned and things just sort of got carried away. The mayor of the town where the historic church is located told The Guardian: “They’ve used plaster and the wrong kind of paint and it’s possible that the original layers of paint have been lost. This is an expert job it should have been done by experts.”

To be fair, we’ve seen worse:

it is toward our own demise that we ever forget fresco monkey jesus. pic.twitter.com/YZjS7KYsIQ

Here are a few more images of the “restoration”:

The latest priceless art restoration disaster is one for the history books https://t.co/2OVQJz6onD pic.twitter.com/8x90I3fT8M

Another Spanish church has been hit with a botched restoration attempt https://t.co/r1CT6xcOP7 pic.twitter.com/rv9nik9Gh5

A botched restoration has made this ancient statue in Spain look very different: https://t.co/bTtfnkGevb pic.twitter.com/m39EijrHlC

Oh, Yay: Jared Leto Is Playing Another Supervillain in the Spider-Man Spinoff ‘Morbius’