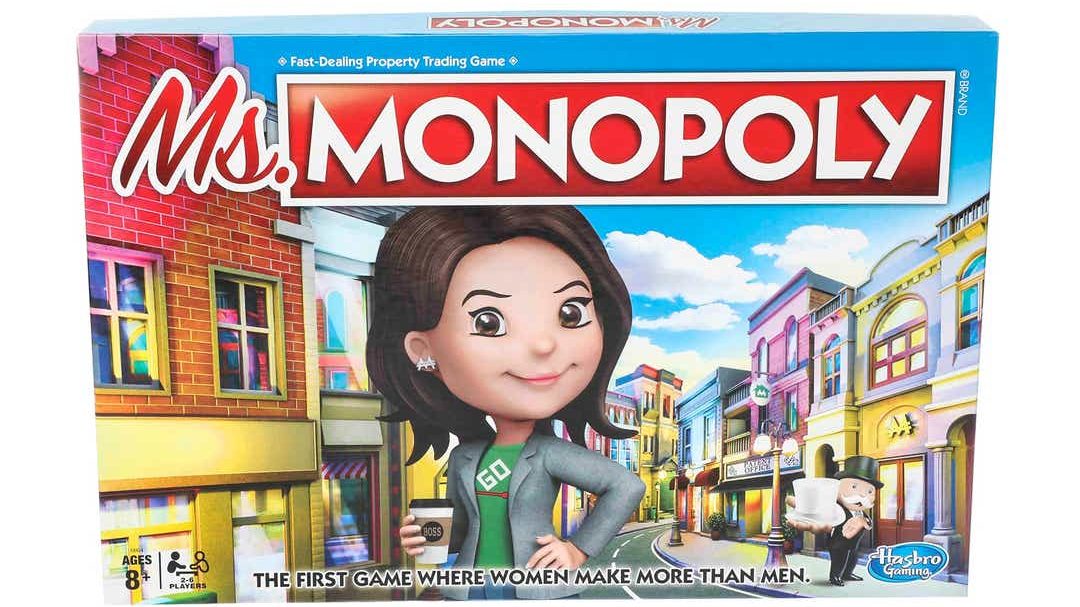 Monopoly remains the best game out there in terms of teaching players that the free market takes a lot of time, a lot of ruthlessness and a decent amount of luck. One facet of late-stage capitalism it’s failed to incorporate is the role gender plays in getting ahead. That’s something Hasbro is trying to rectify with Ms. Monopoly.

It goes about this in an interesting way, by envisioning a world in which the pay gap has not only closed but actually swung the other way. Women players of Ms. Monopoly are dealt more money at the outset than male players are ($1900 instead of $1500) and get more money for passing Go ($240 instead of the traditional $200).

Also, instead of vying in the area of real estate, Ms. Monopoly players move around the board and invest in inventions and innovations created by women, like bullet-proof vests and chocolate chip cookies. “We made sure that this felt authentic and was a fun game families could play and learn about these things that they love and are a part of their life that they didn’t know were invented by women,” Jen Boswinkel, senior director of global brand strategy and marketing for Hasbro Gaming, told USA Today.

It’s easy to imagine a few men taking umbrage at the new rules, but plenty of women were less than thrilled. Many were quick to point out that Monopoly itself has a somewhat ironically patriarchal backstory.

Monopoly was a, shall we say, “remix” of a board game called The Landlord’s Game, which was created in 1903 by a woman named Lizzy Magie. Magie’s idea for the Landlord’s Game was to demonstrate the cruelty of the economic injustices she saw around her, in which people were crushed out of business by larger and more powerful companies, and any unlucky turn could send you to jail for unclear crimes. In fact, Magie created two sets of rules — one in which players are rewarded for cooperating with each other, as a way of demonstrating the perks of a more just economic system. The other set of rules, well, you’re probably familiar with those.

Magie patented her game and it achieved some measure of success across the country until it came to the attention of Clarence Darrow in 1932. Darrow took the game, re-worked a few of the property titles, and took it to Parker Brothers, who made it into the global sensation we know today — and made Darrow a rich man. When Parker Brothers bought Magie’s patent from her for a mere $500, she thought it was because they were going to start selling her game for her, but soon learned it was simply to keep her from suing. She went to the press with her story and found a few sympathetic reporters, but there was little that could be done to fight the quickly spreading myth of Clarence Darrow, the board game whiz making real estate fun again. She passed away in 1948, a widow with no children, her contribution to maybe the most popular board game since Checkers almost entirely unknown.

One bright spot here is that Hasbro does seem to be doing its part to make sure that future innovations by women won’t go as unheralded as Monopoly’s itself. In a video announcing the launch, Hasbro surprised three young women inventors with $20,580 (in real dollars). 13-year-old Gitanjali Rao, 16-year-old Sophia Wang from Connecticut and 16-year-old Ava Canney from Ireland have very bright futures and are working to make the future a little brighter for everyone else too. You can learn more about their accomplishments in the video below.

It’s undeniably cool to have a board game that can teach women a little about both the real pay gap they’ll be inheriting and the women who thrived in spite of it. Hopefully, it’ll even inspire a few of us to work towards closing that gap. And learning about the accomplishments of women in the past is a nice touch for a board game. It’d just also be nice if Ms. Monopoly acknowledged that it, itself, is the product of a creative, innovative woman. But as Magie herself intended, one of the big lessons of the game remains just how unfair life can sometimes be.

Trump (Accidentally) Insulted a Pastor on Twitter. Here’s What He Said in Response