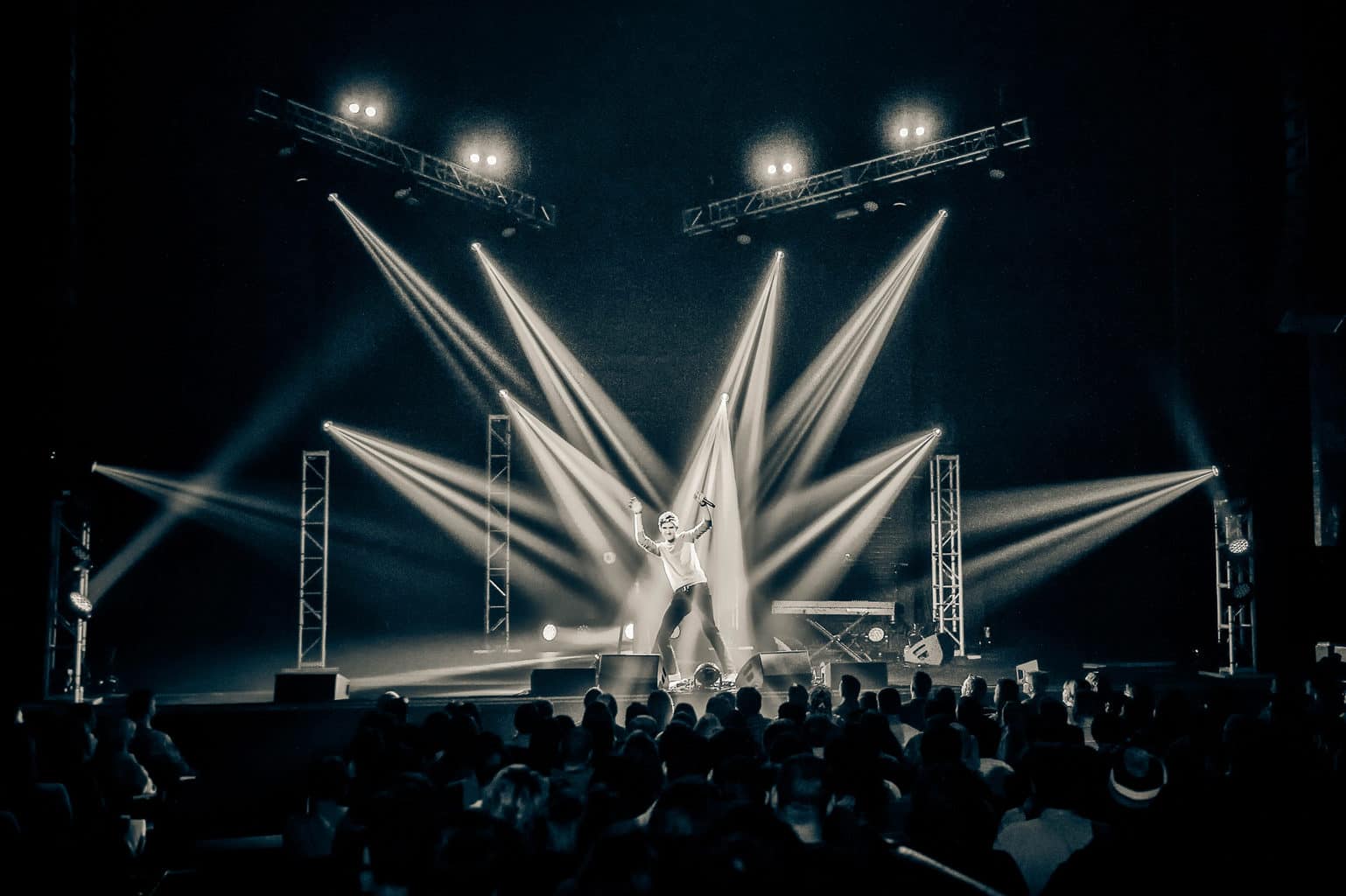 The summer of 2016 saw two performances go from ecstasy to horror in an instant. The first was Kanye West’s infamous Saint Pablo tour, in which he debuted his free-thinking Donald Trump admirations, and the second was Bo Burnham’s Make Happy, a Netflix comedy special that, through a final meditation on fame and performance, accidentally prophesied Kanye’s current re-emergence. We’re calling Kanye’s turn a betrayal, but Bo Burnham’s show communicates it might have been unavoidable.

Bo Burnham rose to fame in the early aughts as a YouTube star. His original comedy songs racked up hundreds of millions of views, and in 2010, he debuted his first live comedy special, Words Words Words, when he was 19. Ever since, Burnham’s slanted his act toward ideas about performing. His second special, what., ends on a downer piece of performance art, and in 2016, Make Happy’s finale carried a similar emotional weight. It’s introspection disguised as fan service, and it’s tied directly to Kanye West.

It would be Burnham’s last stand-up act to date. He hasn’t stood on a stage and told jokes since, instead putting all his time into writing and directing. Aside from a couple bit parts in a few tiny movies, “Can’t Handle This” was in effect the punctuation mark on Burnham’s comedy career, and his career on a stage in general. His comeback, if you could even describe it that way, will be as director of this summer’s Eighth Grade.

Kanye West, too, has re-emerged after a performing hiatus, but his exit and return both sit far afield from Burnham. Kanye’s departure from the stage also came in 2016, when the San Jose stop on his Saint Pablo tour saw the artist launch into a 25-minute rant about his personal political views and his endorsement of then-President-elect Donald Trump. Kanye said if he had voted, he would have voted for Trump. The crowd, standing beneath him on a stage designed for them, booed.

Kanye just said if he had voted (which he didn’t) he would’ve voted Trump. pic.twitter.com/g2HyFz6KPD

Days later, Kanye cancelled the rest of the Saint Pablo tour. He was admitted to the hospital for stress and exhaustion, and not long after he appeared at Trump Tower with the current president. The backlash was vicious and swift, and Kanye disappeared.

This April, Kanye returned to Twitter, and in turn, the public eye. He came out strong in support of the president and positioned himself as one of the few free-thinkers in popular culture. He explained that most people in modern society were prisoners of the “thought police,” and wrote that slavery was “a mentality.” Later, in a taped interview with TMZ, Kanye called slavery a choice.

The thought police want to suppress freedom of thought

You don’t have to agree with trump but the mob can’t make me not love him. We are both dragon energy. He is my brother. I love everyone. I don’t agree with everything anyone does. That’s what makes us individuals. And we have the right to independent thought.

In the wake of Kanye’s return, social commentators and cultural critics have stretched their mental capacities to the limit in an attempt to contextualize, diagnose, even rationalize his behavior. The most common term throughout this latest turn in Kanye’s career and personality has been “betrayal.” How could one of the most pre-eminent social thinkers and modern musical influencers be so out of touch? How could he adopt such reductive views? How could he cease to be the man we wanted, the leader we wanted, the performer we wanted?

Some said Kanye was still suffering from the mental health struggles that sent him on hiatus in the first place. Some said it was all a con designed to shake the ground upon which his upcoming album would land. Others said it was a delusional social correction, Kanye’s attempt to extract his persona and his art from blackness. All these ideas might be true, and they can be true at the same time, but Bo Burnham’s act showcases the container that captures all of that truth: the suffocating, damaging dynamic between performer and fan.

The final piece of Make Happy begins with satire, but ends with reality. Burnham introduces the bit by placing it alongside Kanye West’s Yeezus tour, in which the rapper morphed his famous rants into an explicit part of the performance. Burnham begins the bit with a “Runaway”-esque instrumental, ranting about petty grievances like narrow Pringle cans and unwieldy burritos. It’s funny, and easy to understand: These rants are silly because, well, the issues of a famous person aren’t really that serious.

But then the turn. After a false finish in which the lights go down and the audience (regrettably, in retrospect) goes nuts, a soft spotlight comes back up to reveal Burnham crouched at the front of the stage. He continues the speech:

The camera, for the first time, shows the audience. Burnham continues.

As Burnham rises to his feet and the lights come up and the music swells, his lyrics grow more fractured and sporadic. He says the audience doesn’t know the half of his problems. He alludes to the “skinny kid with a steadily declining mental health.” At a couple points, he just screams. And when it’s over: “Thank you. Good night. I hope you’re happy.” He tosses the microphone. Thud.

It’s a cruel twist: The show was never about Burnham, it was about the audience, and as soon as the audience comes to that realization, Burnham severs the connection. The prevailing thought is uncomfortable and a bit confusing: It’s possible for performers, even successful ones, to resent their audiences, and then resent themselves for resenting that audience. When your success is defined by other people’s approval, you lose the feeling of creative control that’s supposed to be the inspiration and origin of purely-motivated art. That loss of control is frustrating, but how can you be frustrated when you’re privileged enough to have an outlet for your art in the first place? It’s a paradox.

Today, we attribute value based on platform, and that begets pride at the top of the ladder and covetousness at the bottom. We don’t worship modern celebrities because they’re necessarily doing something ground-breaking or inspirational; we do it because they made it onstage in the first place. Social media teaches us to chase a platform, too, but when we do, we break from the humility that allows us to see past ourselves. That’s why we make idols out of Kanye West, and that’s why those idols fall.

Social media has made the idea of celebrity more pervasive than ever. Because popular figures now penetrate so much of our everyday lives—through their photos, snaps and ads for meal services—we expect them to speak into our everyday lives in a way we didn’t before. It used to be fine for someone famous to just be famous—pop up in tabloids or laugh on late-night couches—but now, they have to use their fame responsibly. Make us laugh, but make us think, too. Write a fun pop song, but don’t beat out the more important artist for Record of the Year. Win an Oscar, but the acceptance speech better be woke. And stumble on your way to the stage while you’re at it—you’re supposed to be just like us.

There’s no excuse for the new Kanye West, but words like “betrayal” contribute to this idea that his choices exist in isolation from the people who consume his art. It doesn’t work like that. Celebrities perform their lives in a system of constant demand but also constant criticism. Some of them, like Burnham, recognize this system for its toxicity and make a clean getaway. Others, like Kanye, use aggression as self-defense. No matter what they do, they feel control is out of their hands, so their acts to regain control become more and more desperate.

Perhaps it’s 20/20 hindsight to say we should’ve predicted Kanye West’s meltdown, but Make Happy hints that from the other side of fame, the events of the past few weeks aren’t traitorous, but inevitable. Extreme environments beget extreme behavior, and for all the times we’ve called Kanye a genius, we’ve also, in his mind, suppressed that genius when it didn’t suit our norms. Now he’s back where Burnham started at the top of the piece, and “Can I say my s***?” has never sounded this scornful.