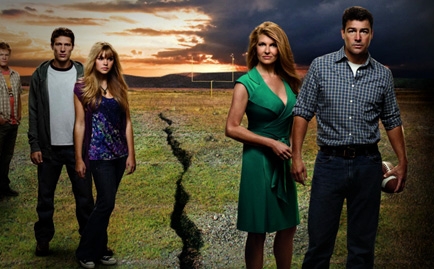 Editor’s note: Tomorrow, Friday Night Lights airs its final episode on NBC (though, if you’ve kept up with this show throughout its run, you know the last episode already aired on DirecTV earlier this year and is available on DVD. Yeah, it confuses us, too). The show has always been one of the best on TV—it lacks the suave subtlety of Mad Men or the "must … keep … watching" qualities of shows like The Wire or Lost, but it had more heart than almost every other show put together. Ostensibly a show about football, FNL was really about people. And how people love each other, hurt each other, make stupid decisions, find redemption and then do the same stupid thing again. It’s hard to imagine a more fully realized—or enviable—marriage on TV than Coach and Tami Taylor’s. It’s difficult to imagine a TV show (!) handling storylines about premarital sex, abortion, death, gang violence, war and school politics with greater humanity, sensitivity or realism. You’ll find yourself caring deeply for these flawed humans, even if you don’t like football. In short: If you haven’t seen this small-screen masterpiece yet, it’s time to start. For now, though, here’s our way of saying goodbye to the best show on television.

It’s easy to look at Friday Night Lights and say: “It’s just a football show. I’ve already seen Varsity Blues.” Easy, that is, until you actually watch a couple episodes and discover it’s about so much more.

Lights is a show about contemporary life. Small-town, Texas life. Drenched in nostalgia, adolescent angst and Midwestern truisms (Dairy Queen, sports radio, Applebees), the show bursts forth with quotidian drama. The Emmy-nominated, Peabody Award-winning show is elegant, mature American art, at once a soft-spoken tone poem—recalling the literary Frontier of Willa Cather, Horton Foote or The Last Picture Show—and a tumultuous tableaux of soap opera with the kinetic Americana of Thomas Hart Benton or Aaron Copland.

Friday Night Lights is a show where God and Christian faith play regular roles. Most characters attend church (albeit primarily because it’s the cultural “thing to do”), a diversity of denominations are represented (evangelical megachurch, mainline, African-American church) and one character plays in a Christian speed-metal band called Crucifictorious. In season two, a main character recommits her life to Christianity and becomes something of a short-lived evangelical zealot (the season premiere shows her being baptized). In season four, the ever-explosive issue of abortion comes up, receiving what is probably the most honest, nuanced treatment of the issue ever on network television. Instead of quickly deciding to “keep it” or “get rid of it,” the characters wrestle with the implications of both and ultimately make a decision that reflects reality, if not our values. And the nuance continues with the fallout and anger from the decision—it’s not quick or easy, but it’s real.

Throughout the series, moral dilemmas are the centerpiece of conflict: Should we sleep together? Are steroids OK to use? What does it mean to love one’s neighbor? The show wrestles with thorny topics (issues of race, class, gender, sexuality, vocation, etc.) with uncommon grace, but almost never with a didactic “nice tidy lesson” wrap-up. It’s a show that gives reality its messy, unromantic due, even while it almost always tips its hat in the direction of hope.

Though the show’s cast of characters includes an array of teenagers—football players, nerds, cheerleaders, outcasts—the heart of Lights is its centerpiece family: the Taylors. Coach Eric and Principal Tami Taylor (Emmy nominees Kyle Chandler and Connie Britton) and their daughter Julie (Aimee Teegarden) are as good as TV families get. They are the show’s rock. They are a good, loving, shockingly functional American family—not without their faults, but always tender and utterly believable. It’s something of a miracle that a contemporary network television show could so vividly remind us of what is wonderful about families who stay together, struggle together and grow together. We so often only get the struggle.

What makes Lights so special is that it gives us goodness—in the form of families that rally around each other, communities that still believe in small-town heroes, and teenagers who make bad decisions but ultimately strive to do what’s right (as opposed to, say, the amoral adolescents of Gossip Girl-type shows).

On an average episode of Lights, Eric and Tami Taylor will have a moment where they sit down together on the couch, or in bed after a long, stressful day. They’ll talk about their days, their struggles, their needs. Sometimes they’ll just look at each other and laugh. Sometimes they’ll fight or flirt. It’s a hopeful picture of marriage as a partnership and a balm, soothing the struggles of everyday life through companionship.

It’s a metaphor for how life is meant to be lived—in tandem, together, as a team. In football, and in everything else.

This article originally appeared in the September/October 2010 issue of RELEVANT magazine.

Google Now Knows Even More About You