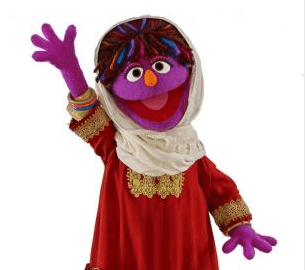 Afghanistan is getting its first-ever “Sesame Street” Muppet. And, in a clearly counter-cultural move, the character, Zari, is a 6-year-old girl. In Afghanistan, women and children were almost completely excluded from education until only 15 years ago. Today the country has around five million kids under the age of five, but only one-third of them aren’t in school, according to Reuters. So, Zari may look like an ordinary Muppet, chumming it up with Elmo and friends, but she actually is a symbol of both female and child empowerment in a country that shows little value to either. Sesame Workshop’s executive vice president of global impact and philanthropy, told Reuters:

The exciting part about Zari is that she is modeling for young girls that it is wonderful to go to school and that it’s ok to dream about having a career. It’s so powerful that the first Afghan Muppet is a girl.

Zari makes her debut today on the “Baghch-e-Simsim,” an Afghan local co-production of the long-running U.S. show. Already, according to Sesame Workshop, some 81 percent of children ages three to seven in Afghanistan watch “Sesame Street.”