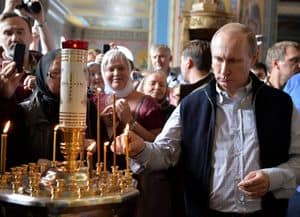 The Moscow Times reported that Sergei Zhuravlyov, a representative of the Ukrainian Reformed Orthodox Church of Christ the Savior, was arrested earlier this month for preaching in the St. Petersburg Messianic Jewish community. He was charged with performing illegal missionary activity.

A law enforcement official said Zhuravlyov was stirring up negative attitudes against the Russian Orthodox Church. He was released on bail, but his case will be sent to court.

Critics continue to fight against the laws, saying they expand far beyond the state’s power and undermine the Russian constitution.

“This new situation resembles the Soviet Union in 1929. At that time confession of faith was permitted only in church,” Hannu Haukka, president of Great Commission Media Ministries, said shortly after the laws were passed. “Practically speaking, we are back in the same situation. These anti-terrorist laws are some of the most restrictive laws in post-Soviet history.”