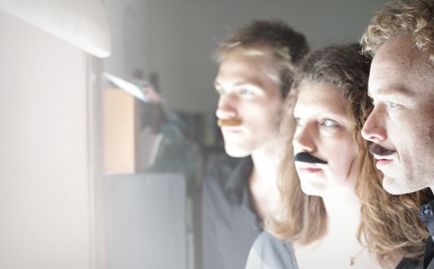 I have to admit my reticence at speaking with Alan Sparhawk, the singer and guitarist for the band Low.

This was, after all, the man who, after announcing that he had been having a "crappy day" to the audience at the 2008 End of the Road Festival in England, tore all the strings out of his guitar and hurled it into the audience before leaving the stage. And this was the gent who, in 2005, posted a long missive on his band’s website announcing that he was through touring because he "had not been very mentally stable for the last while."

But this was also someone who a fellow writer had described as "very candid and kind" when he interviewed Sparhawk a few years back. "[He] talked openly about his Mormon faith, too," my friend assured me.

I couldn’t help but wonder which Alan Sparhawk I was going to get on the phone as I dialed his home in Duluth, Minn.

"If you’ll give me a second," Sparhawk says with a bemused chuckle after his wife and bandmate Mimi Parker hands him the phone, "you caught me in the middle of eating a sandwich. So, pardon me, I’m just drinking a little bit of rice milk to wash it down."

It really shouldn’t have come as such a surprise to me to find Sparhawk in such an agreeable state of mind. After going through the personal upheaval that threatened to end his career as a touring artist, as well as the internal trials that saw the band’s long time bassist Zak Sally quit in 2005, things feel much more settled in the life of both Sparhawk and Low.

It likely helps that, after 18 years of releasing albums and touring, the band is finally at a place where they are free of the broad categorizations that followed them early on. Their sound, once referred to (not necessarily so lovingly) as "slowcore" due to its patient tempos and lack of volume, is now part of the indie lexicon with other acts (The New Year, Iron & Wine) facing Low comparisons. Also, Sparhawk and Parker’s religious beliefs no longer float right to the surface of every article written about the group, even though the couple is still very active within the Mormon Church.

In other words, the blogosphere and their fellow musicians are finally accepting Low as the elder statesmen (and woman) of the indie rock community that they are, and are leaving aside all the unnecessary chatter that distracts from the music.

While no one in the band would admit this is having any effect on their creative process, the fact is, Low has never sounded as comfortable as they do on their latest album, C’mon (out today).

Their ninth full-length is a rich, sumptuous album that is noticeably free of the aggression and noise that has marked the trio’s last two efforts (particularly 2007’s Drums and Guns, which had a furious anti-war sentiment at its core). It doesn’t scale completely back to their whispery, translucent beginnings either. C’mon finds a luscious middle ground overflowing with beautifully spare guitar and percussion work, skin-warming melodies and swirling atmospherics, all anchored by Sparhawk and Parker’s gorgeous vocal harmonies.

"It’s definitely not a conscious switch," says Sparhawk of C’mon‘s more intimate sound. "I’ve found that when I’ve aired something out to an extent, I naturally want to rebound in a different direction. The songs on Drums and Guns were much more about reaching out and looking at mankind, which ultimately falls into politics and its association with morals and power. This one, I was looking at more personal, one-to-one interactions. More love songs, so to speak."

The core of the album centers on a pair of songs, "Especially Me" and "$20," that feature some boldly naked and poetic sentiments of adoration (The breath of a bird/ A voice never heard/ But you knew every word) that will sound very familiar to anyone who has shared their heart with another. They are surrounded by equally heart-stirring refrains that concern childhood fears ("Witches"), the mutability of life ("Something’s Turning Over") and an appreciation of being "Nothing But Heart."

Sparhawk acknowledges that some of the spirit of this new album was provided by the place where it was recorded: a decommissioned Catholic church in Duluth where Low has built a studio (they recorded their 2002 album Trust there).

"It’s a unique space which imposes a character on everything we do there," he says. "I remember sitting in the pews while we were fiddling with stuff and letting myself feel the weight of that space, and acknowledge what had been there. The history of good intentions and hope and all that happened in that space. It made me stand a little quieter."

Sparhawk is no stranger to moments like that, pointing to the humbling experiences he has had writing music. "Most of the time, a song or a lyrical phrase that will work with a melody will fall into my lap. Those are the points that I have to acknowledge it’s coming from a greater place or a greater energy that’s outside of myself. The responsibility for me is how to make them work. That’s when the logical and the ego comes in."

That’s the thing about Low these days: though you can sense the palpable relief they feel about not having to delve into their religious beliefs with every interviewer, it’s not as if they are looking to avoid the subject entirely. Sparhawk’s faith in a higher power is evident both in his feelings about musical inspiration and in everything he does. And since their involvement with the Mormon Church is common knowledge about the band, there is little concern about whether Low’s fans look askance at them when learning about their beliefs.

Still, says Sparhawk, "you wonder sometimes: ‘Is that a factor one way or the other? How much does that change people’s perception of the music?’ I get the sense every once in a while that people have these knee-jerk reactions, but they keep them away from us. It’s just unfortunate. If you’re going to use that kind of logic to dismiss people or change your opinion about something … there are a lot more intense things to get bent out of shape about."

For Sparhawk and his band, there’s precious little to get bent out of shape about, at least not in the negative sense. C’mon will soon be heard on iPods and record players the world over, and the band will be spending much of the spring and summer on the road in support of the new album.

And, of course, there’s the glow that they are still feeling after one of the band’s musical idols, Robert Plant, decided to cover two Low songs for his solo album Band of Joy.

"When we first heard about it, I had to call Mim right away and have her look it up to see if it was a joke or something. That kind of stuff just doesn’t happen. Sure enough, it was a couple of songs from [the band’s 2005 album] Great Destroyer. When I heard he was going to do ‘Monkey,’ which is basically just a blues song, I was hoping he’d totally Zep it up. But it’s very mellow and primal and whispered and soft and creepy. It’s really great." He added that he and Parker had tickets to see Plant when he came to perform in Minneapolis, with hopes they’ll get to meet the man.

After this flurry of activity, Sparhawk is going to sit back for a while and wait for that next spark of inspiration whatever it might be. "I don’t know if it is God saying, ‘Here’s a funky line for you,’ or if it is as specific as that. All I know is there’s a strain of truth running through every moment of our lives, and there are ways that creativity taps into that. It’s God’s perfect light being filtered through our imperfectness, and it gets bounced around and looks weird when it comes out the other end."

Service as Lifestyle, Not Obligation